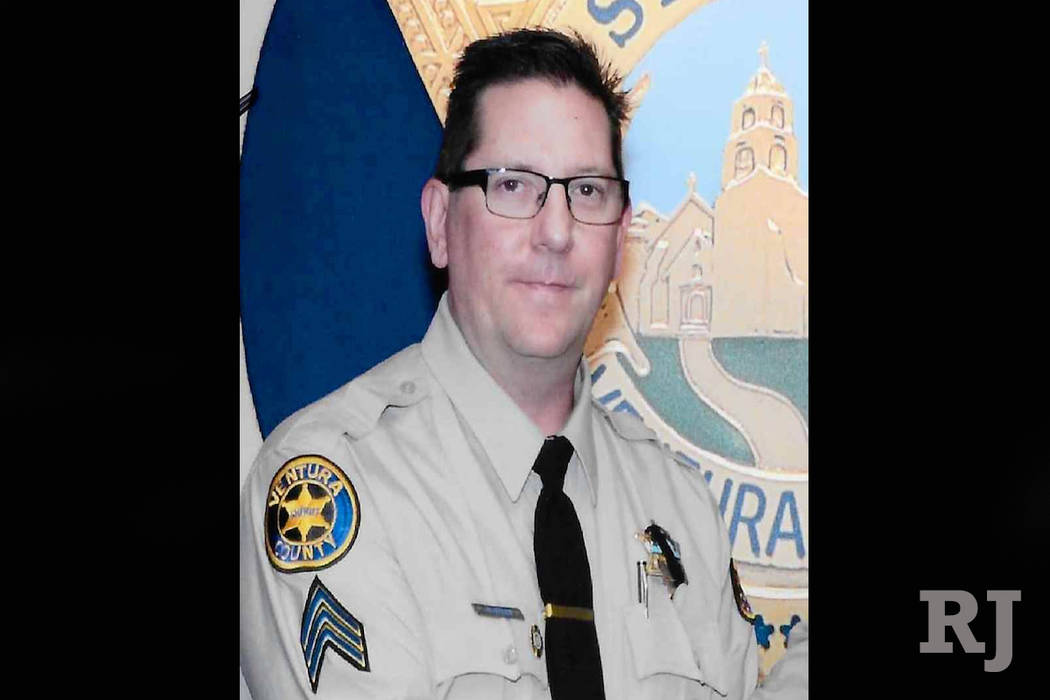 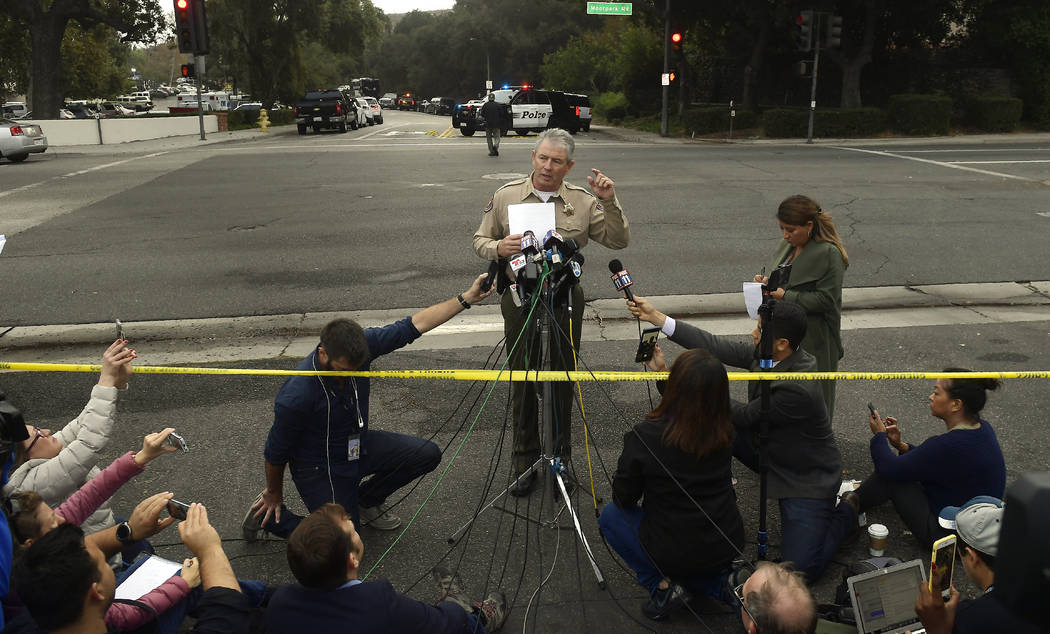 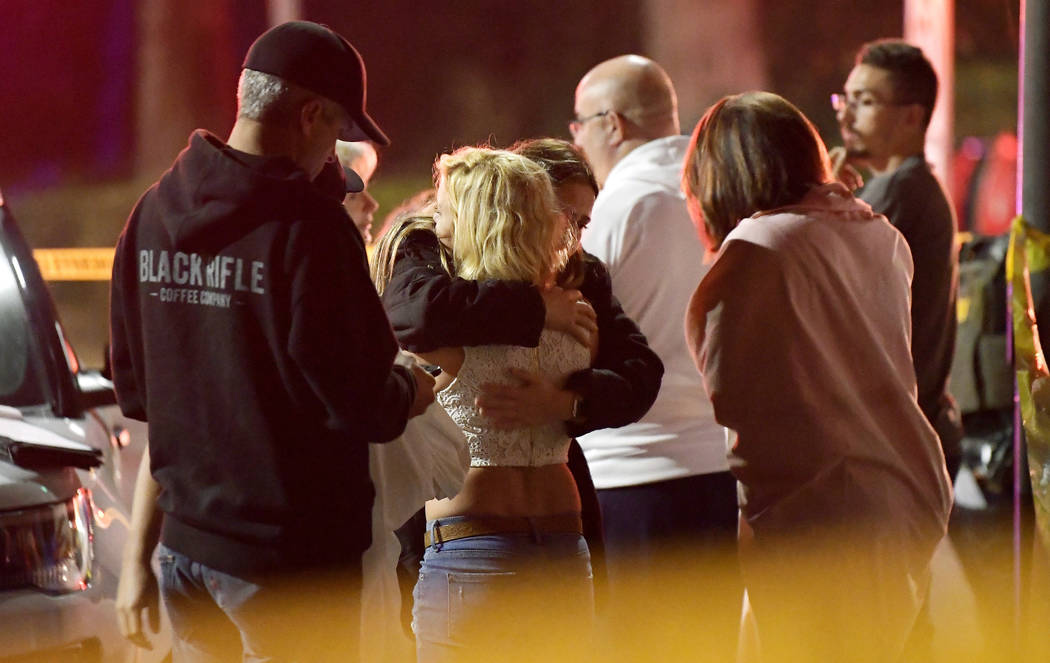 People comfort each other as they stand near the scene Thursday, Nov. 8, 2018, in Thousand Oaks, Calif., where a gunman opened fire Wednesday inside a country dance bar crowded with hundreds of people on "college night," wounding multiple people including a deputy who rushed to the scene. (AP Photo/Mark J. Terrill) 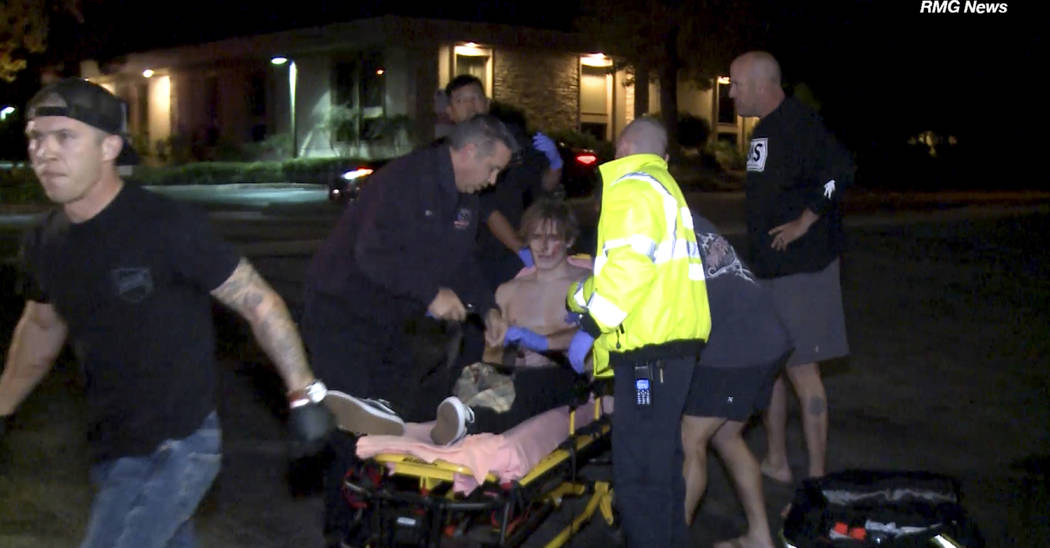 In this image taken from video a victim is treated near the scene of a shooting, Wednesday evening, Nov. 7, 2018, in Thousand Oaks, Calif. A hooded gunman dressed entirely in black opened fire on a crowd at a country dance bar holding a weekly "college night" in Southern California, killing multiple people and sending hundreds fleeing including some who used barstools to break windows and escape, authorities said Thursday. The gunman was later found dead at the scene. (RMG News via AP)

THOUSAND OAKS, Calif. — Friends are remembering sheriff’s sergeant who was killed trying to stop a shooting rampage at a California bar as a “cop’s cop” who didn’t hesitate to run toward danger.

Colleagues of Helus describe him as a friend and an exceptional man and officer.

“The fact that he was the first in the door doesn’t surprise me at all,” sheriff’s Sgt. Eric Buschow said Thursday. “He’s just one of those guys that wouldn’t hesitate in a situation.”

Helus was married with a grown son and took up fly fishing a few years ago, Buschow said. He loved fishing in the Sierra Nevada mountains with his son.

“He was just a great guy, a gentle soul,” Buschow said. “Patient. Calm no matter what. When you call 911, he’s one of the guys you want showing up.”

He said Helus was on the SWAT team for much of his career and worked in narcotics and investigations.

“If you were a victim of a crime, you want him investigating the case,” Buschow said. “He would go to the ends of the Earth to find a suspect. Just an awesome investigator.”

He said he has no doubt Helus’ tactics at the scene “were sound when he went in.”

“But unfortunately, you go into the unknown, you know there’s shots being fired, obviously the suspect was in there and ready for him,” he said.

Sheriff Geoff Dean, who choked back tears while talking about Helus, said his friend had been talking to his wife when the shooting call came in.

Dean said he has no doubt Helus and a California Highway Patrol officer who also was the first to respond “saved lives by going in there and engaging with the suspect.”

He called Helus a hero.

“He went in there to save people and paid the ultimate price,” he said.