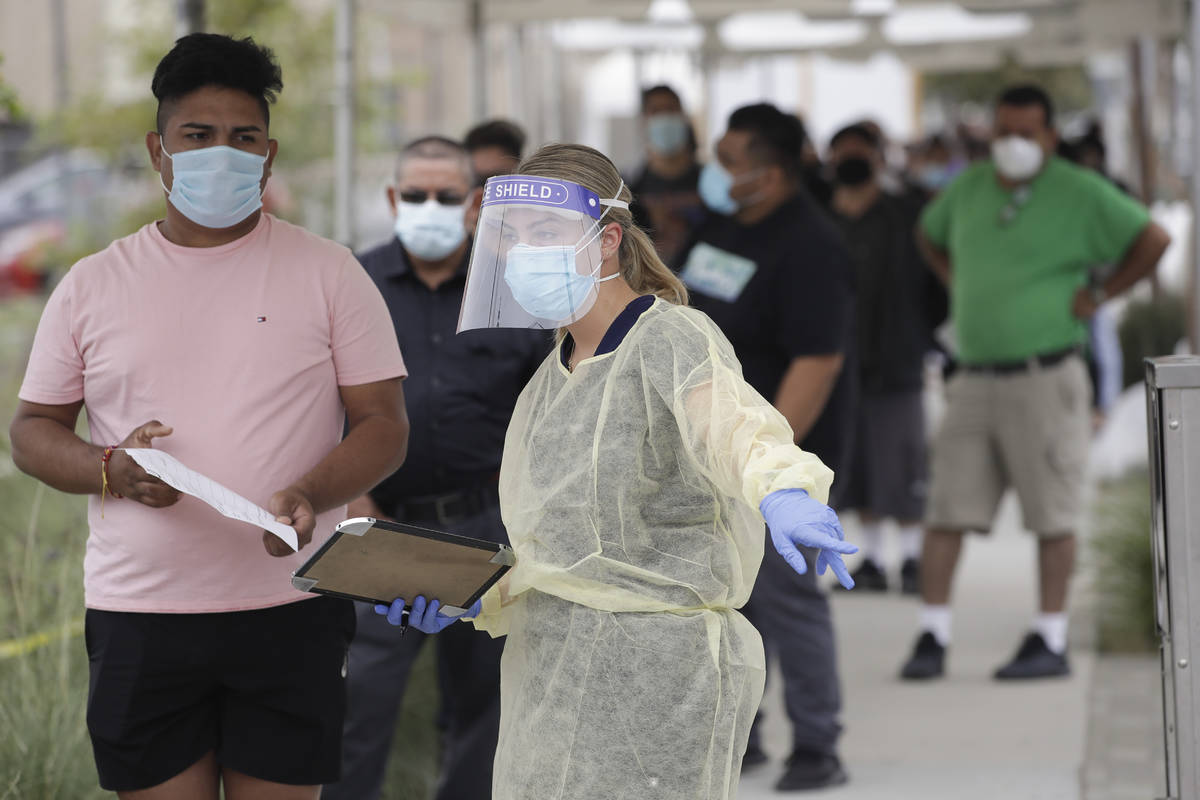 In this July 22, 2020, file photo, people line up behind a health care worker at a mobile Coronavirus testing site at the Charles Drew University of Medicine and Science, in Los Angeles. As the world races to find a vaccine and a cure for COVID-19, there is seemingly no antidote in sight to the burgeoning outbreak of coronavirus conspiracy theories, hoaxes, anti-mask myths and sham treatments. (AP Photo/Marcio Jose Sanchez, File) 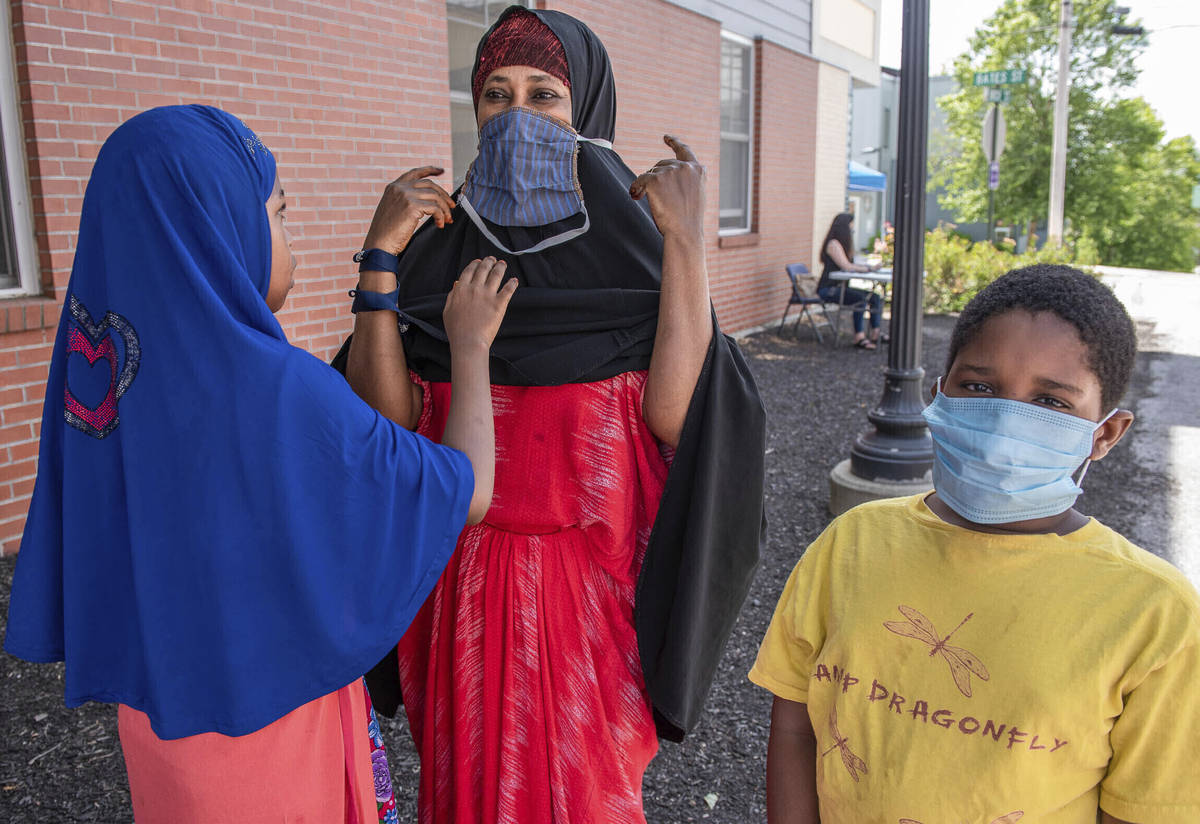 FILE - In this July 25, 2020, file photo, Asha Dere, center, gets some help putting on her new mask from her daughter Sundus Abdikadir at the B Street Health Center in Lewiston as son Anwar Abdikadir models his new mask. As the world races to find a vaccine and a cure for COVID-19, there is seemingly no antidote in sight to the burgeoning outbreak of coronavirus conspiracy theories, hoaxes, anti-mask myths and sham treatments. (Andree Kehn/Sun Journal via AP, File) 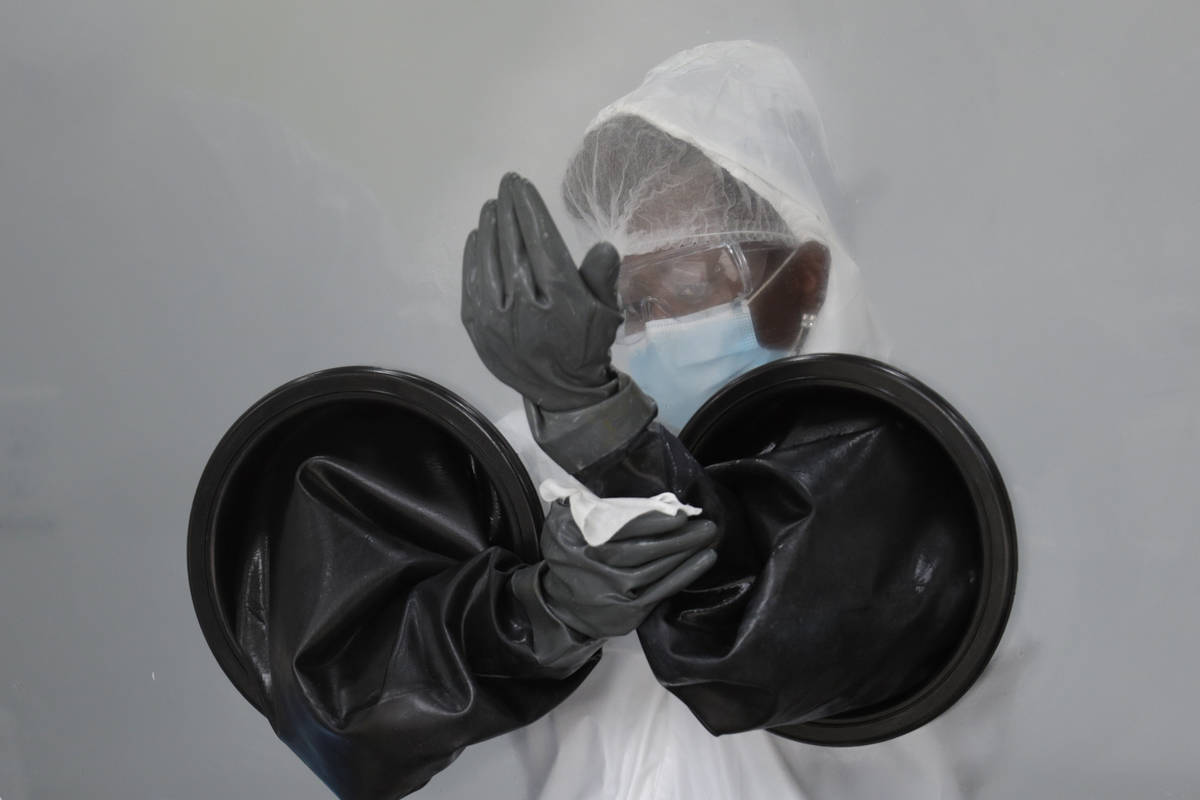 FILE - In this July 17, 2020, file photo, a health care worker sanitizes her equipment while working at a walk-up COVID-19 testing site during the coronavirus pandemic in Miami Beach, Fla. As the world races to find a vaccine and a cure for COVID-19, there is seemingly no antidote in sight to the burgeoning outbreak of coronavirus conspiracy theories, hoaxes, anti-mask myths and sham treatments. (AP Photo/Lynne Sladky, File)

PROVIDENCE, R.I. — As the world races to find a vaccine and a treatment for COVID-19, there is seemingly no antidote in sight to the burgeoning outbreak of coronavirus conspiracy theories, hoaxes, anti-mask myths and sham cures.

The phenomenon, unfolding largely on social media, escalated this week when President Donald Trump retweeted a false video about an anti-malaria drug being a cure for the virus and it was revealed that Russian intelligence is spreading disinformation about the crisis through English-language websites.

Experts worry that the torrent of bad information is dangerously undermining efforts to slow the virus, which has been blamed for about 150,000 deaths in the U.S. and over a half-million more around the world.

“It is a real challenge in terms of trying to get the message to the public about what they can really do to protect themselves and what the facts are behind the problem., said Michael Osterholm, head of the University of Minnesota’s Center for Infectious Disease Research and Policy.

He said the fear is that “people are putting themselves in harm’s way because they don’t believe the virus is something they have to deal with.”

Rather than fade away in the face of new evidence, the claims have flourished, fed by mixed messages from officials, transmitted by social media, amplified by leaders like Trump and able to mutate when confronted with contradictory facts.

“You don’t need masks. There is a cure,” Dr. Stella Immanuel promised in a video that promoted hydroxychloroquine. “You don’t need people to be locked down.”

The truth: Federal regulators last month revoked their authorization of the drug as an emergency treatment amid growing evidence it doesn’t work and can have deadly side effects. Even if it were effective, it wouldn’t negate the need for masks and other measures to contain the outbreak.

None of that stopped Trump, who has repeatedly praised the drug, from retweeting the video. Twitter and Facebook began removing the video on Monday for violating policies on COVID-19 misinformation, but it had already been seen more than 20 million times.

Many of the claims in Immanuel’s video are widely disputed by medical experts. Immanuel has made even more bizarre medical pronouncements in the past, saying in a 2013 sermon that cysts, fibroids and some other conditions can be caused by having sex with demons.

Other baseless theories and hoaxes have alleged that the virus isn’t real or that it’s a bioweapon created by the U.S. or its adversaries. One hoax from the outbreak’s early months claimed new 5G towers were spreading the virus through microwaves. Another popular story held that Microsoft founder Bill Gates plans to use COVID-19 vaccines to implant microchips in all 7 billion humans on the planet.

Then there are the political theories — that doctors, journalists and federal officials are conspiring to lie about the threat of the virus to hurt Trump politically.

Social media has amplified the claims and helped believers find each other. The flood of misinformation has posed a challenge for Facebook, Twitter and other platforms, which have found themselves accused of censorship for taking down virus misinformation.

A professionally made 26-minute video that alleges the government’s top infectious-disease expert, Dr. Anthony Fauci, manufactured the virus and shipped it to China was watched more than 8 million times before the platforms took action. The video, titled “Plandemic,” also warned that masks could make you sick — the false claim that Facebook cited when it removed the video down from its site.

Judy Mikovits, the discredited doctor behind “Plandemic,” had been set to appear on the show “America This Week” on the Sinclair Broadcast Group. But the company, which operates TV stations in 81 U.S. markets, canned the segment, saying it was “not appropriate” to air.

This week, U.S. government officials speaking of condition of anonymity cited what they said was a clear link between Russian intelligence and websites with stories designed to spread disinformation on the coronavirus in the West. Russian officials rejected the accusations.

Of all the bizarre and myriad claims about the virus, those regarding masks are proving to be among the most stubborn.

New York City resident Carlos Lopez said he wears a mask when required to avoid problems but doesn’t believe it is necessary.

“They’re politicizing it as a tool,” he said. “I think it’s more to try to get Trump to lose. It’s more a scare tactic.”

He is in the minority. A recent AP/NORC poll found that 3 in 4 Americans — Democrats and Republicans alike — support a national mask mandate.

Still, mask skeptics are a vocal minority and have come together to create social media pages where many false claims about mask safety are shared. Facebook has removed some of the pages — such as the group Unmasking America!, which had nearly 10,000 members — but others remain. A video of a woman attacking a mask display at an Arizona Target received almost 84,000 likes on Twitter.

Early in the pandemic, medical authorities themselves were the source of much confusion regarding masks. In February, officials like the U.S. surgeon general urged Americans not to stockpile masks because they were needed by medical personnel and might not be effective in everyday situations.

Public health officials changed their tune when it became apparent that the virus could spread among people showing no symptoms.

Yet Trump remained reluctant to use a mask, mocked his rival Joe Biden for wearing one and suggested people might be covering their faces just to hurt him politically.

Trump did an abrupt about-face this month, claiming that he had always supported masks. “When you can, use a mask,” he said, only to later retweet Immanuel’s video against masks.

The mixed signals hurt, Fauci acknowledged on an interview with NPR this month.

“The message early on became confusing,” he said.

Many of the claims around masks allege harmful effects, such as blocked oxygen flow or even a greater chance of infection by viruses. The claims have been widely debunked by doctors.

Dr. Maitiu O Tuathail of Ireland grew so concerned about mask misinformation he posted an online video of himself comfortably wearing a mask while measuring his oxygen levels. The video has been viewed more than 20 million times.

“While face masks don’t lower your oxygen levels. COVID definitely does,” he warned.

Yet trusted medical authorities are often being dismissed by those who say requiring people to wear masks is a step toward authoritarianism.

“Unless you make a stand, you will be wearing a mask for the rest of your life,” tweeted Simon Dolan, a British businessman who has sued the government over its COVID-19 restrictions.

Trump’s reluctant, ambivalent and late embrace of masks hasn’t convinced some of his strongest supporters, who have concocted ever more elaborate theories to explain his change of heart. Some say he was actually speaking in code and doesn’t really support masks.

O Tuathail witnessed just how unshakable COVID-19 misinformation can be when, after broadcasting his video, he received emails from people who said he didn’t wear the mask long enough to feel the negative effects or otherwise cheated during the demonstration.

That’s not surprising, according to University of Central Florida psychology professor Chrysalis Wright, who studies misinformation. She said conspiracy theory believers often engage in mental gymnastics to make their beliefs conform with reality.

“People only want to hear what they already think they know,” she said.