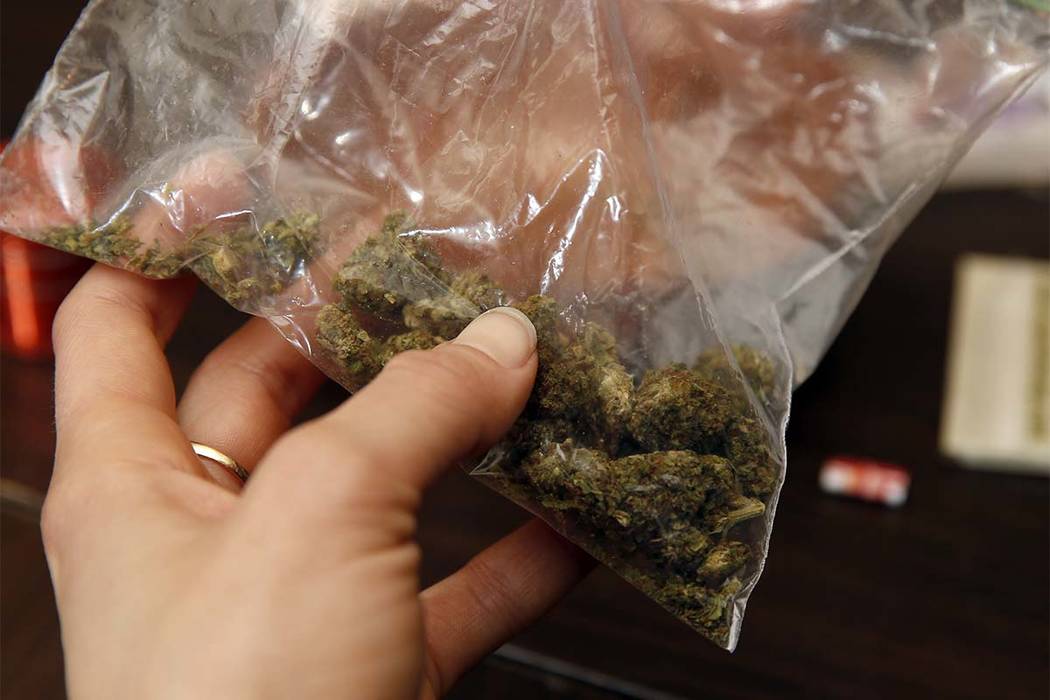 Rica Madrid poses for a photograph as she holds a bag of pot as she prepares to roll a joint in her home on the first day of legal possession of marijuana for recreational purposes, Thursday, Feb. 26, 2015, in Washington. (AP Photo/Alex Brandon)

WASHINGTON — Arash Shirazi is a pretty cosmopolitan guy. A music agent and filmmaker, he hangs out with creative types and bohemians. He’s lived in L.A., and spent time in cities such as, yes, Amsterdam, so it’s fair to say that he’s not particularly prudish in his social life.

And yet… leaving a Washington parking lot recently, he took pause when a distinctively skunky scent passed under his nostrils.

Of course he’d smelled marijuana before. But this was a weekday afternoon — in Georgetown!

“I was surprised,” he explained. “Georgetown’s a bit more buttoned-up.”

Well, that’s what they used to say about Washington in general. But now, more than two years after the District legalized marijuana possession, it seems that everywhere you go in the nation’s capital, you catch a whiff of weed. And it’s often in the places where you least expect it.

On H Street downtown, as you wind your way between officeworkers rushing back from lunch.

At 10th and E, in the shadow of the FBI headquarters.

In the hallway of your apartment building. In the foyer of your gym. In Aisle 9 of the Walmart, wafting in through the beach towels. (Wait, Walmart?)

If you’re seeking it out, you can find the flower in Washington in almost any form: crushed, concentrated, liquefied, baked into an omelet. Puffing in public remains prohibited, but you can toke up at a wide variety of private events, enroll in a gardening class, or host a catered dinner party, where appetizer, entree and dessert are all “infused.” LeafedIn, a site that pinpoints consumers and vendors on city maps, shows downtown D.C. buried under cannabis leaf icons. There’s even one hovering over the White House.

For those who don’t partake, this world is largely invisible, if not odorless. And now that it’s summer, the humidity keeping all scents close, it’s ever more obvious: Washington is smoking more weed than you ever realized.

Stephen Sears, an academic librarian who lives on Capitol Hill, calls it “ghost weed syndrome” — that lingering sense of a scent, unmistakable but often untraceable.

Theoretically, we should all be much more blase about this — nearly 70 percent of D.C. residents voted for legalization. And yet the city’s sharp new fragrance remains a curiosity. Who’s that smoking? Where’s that coming from?

“You have to wonder if these older Capitol Hill denizens have been smoking this whole time,” Sears muses.

Like Platform 93/4 or the wardrobe that leads to Narnia, the portals to the D.C. weed world hide in plain sight. Muggles walk right past them.”I’ve lived in this building for almost 20 years, and in the last month or so it’s smelled like weed all the time,” says Elizabeth Terry, a communications consultant who lives in Cathedral Heights. “I’m walking down the hall, sort of sniffing to figure out which unit it is.”

Elizabeth Thorp was puzzled when she picked up the scent in the plaza of a massive office complex near Chinatown. A nearby party? A leisurely lunch break? “Even in the suburbs of Bethesda, I hear that middle-aged people are partaking,” Thorp, who edits the women’s comedy and news site pypo.com, says.

Jen DeMayo caught a whiff while leaving Southwest Neighborhood Library, where she teaches a Tuesday-night yoga class. It seemed like an odd place to light up, but perhaps not: At least one D.C. yoga class incorporates marijuana as well as mindfulness.

Maybe these fumes are just what the District needs. “I like the idea of D.C. being on one big contact high,” mused Adam Goodheart, a D.C.-based writer. “Some member of Congress may be walking down the street, fuming about health care, getting themselves worked up into a partisan fury, and find themselves mysteriously mellowing.”

But who are all these people lighting up, just out of sight? The stoned and the sober often cross paths without knowing it, like characters in a Marx Brothers sketch. At 11 a.m. on a Tuesday, a group of young men passed a blunt on the steps of the Smithsonian American Art Museum. Kyla Frank, passing out fliers for a tour bus company on the other side of the building, couldn’t figure out who was stinking up her mornings. “Why are you smoking this early in the morning?” she asked nobody in particular.

Walking her dog on a Monday night in Adams Morgan, Brianne Molloy said that she usually catches a whiff around here in the evening. She didn’t know who was doing the smoking, but just a block away, Mark Bebawy, the owner of Funky Piece Smoke Shop and Glass Gallery, was hosting a potent party in a basement restaurant that was closed for the evening. A man wearing a rubber whistle in the shape of a seashell emerged onto the street, holding a plastic baggie containing what he said was exactly the legally permitted two ounces of weed. “It’s the District of Cannabis,” he shrugs.