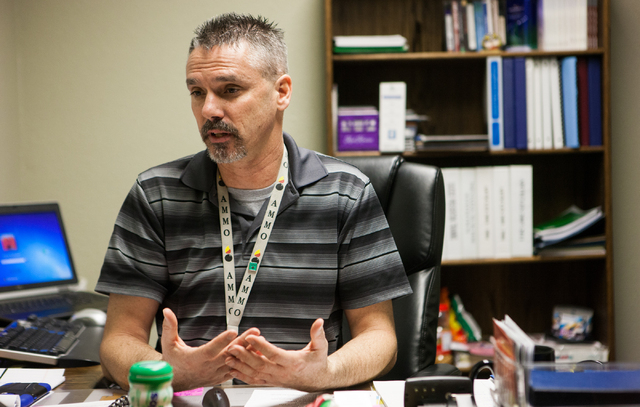 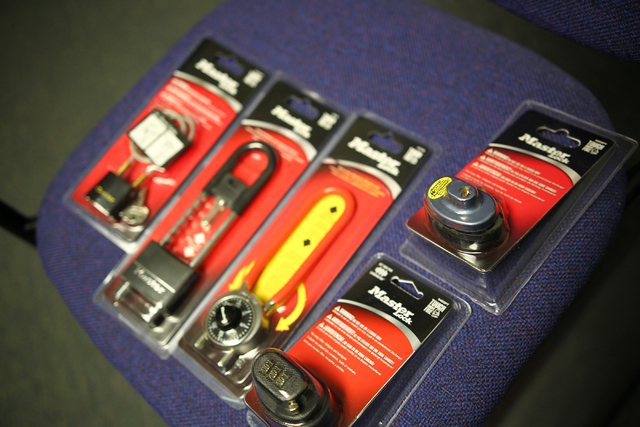 A variety of locks for keeping guns safe, which the Office of Suicide Prevention gives out at gun shows, are seen in this photo. (Chase Stevens/Las Vegas Review-Journal)

Firearms are used in more than half of Nevada suicides.

To help reduce that statistic, the Nevada Office of Suicide Prevention looked to a New Hampshire program that educates gun store owners to identify customers who may be suicidal.

“I think it would be beneficial. How effective? We would have to wait and see,” Ron Reyes, manager at Las Vegas’ Discount Firearms and Ammo, LLC, said Thursday. “I think every range in town has experienced a situation like this.”

The program, launched in December, is off to a slow start. Not many store personnel in Clark County were willing to comment publicly about the program.

Nevada has the nation’s fourth-highest suicide rate, about 20.3 suicides for every 100,000 people.

In the Silver State, suicide is the sixth- leading cause of death, according to the most recent available statistics from the U.S. Centers for Disease Control and Prevention. About 53 percent of the 547 Nevada suicides in 2010 involved firearms.

“The gun community is just one more avenue to reach out to organizations and invite them to take the training,” Richard Egan, suicide prevention training and outreach facilitator, said on Wednesday. “It’s just one more way … to utilize that community to reduce the suicide rate.”

Egan, a gun owner himself, last year began to research the New Hampshire program to replicate it in Nevada. He even expanded on New Hampshire’s model. The program in Nevada provides training on top of informational packets to participants.

During a Tuesday interview with KNPR’s “State of Nevada,” Mark Cole, gun store owner and director of the Nevada Firearms Coalition, said Nevada’s new program is something positive for the firearms industry. And by having the coalition involved, the program could have broader access to store owners, their employees and gun owners, he said.

“It gives the whole industry a better look and it shows that we are just not there for the sale, that we actually do care,” he said during the radio interview.

More than a dozen Clark County guns stores contacted by the Review-Journal this week either declined to comment or didn’t return calls.

Under Nevada law, a person doesn’t need a permit or a license to buy a firearm, but does need to pass a federal background check.

The new program offered by the state’s Office of Suicide Prevention has two training options, one lasting four hours and a more in-depth, 16-hour choice.

In addition to learning how to identify customers who may be suicidal, participants are taught how to educate customers on firearms safety.

Some of the red flags a customer might show are signs of isolation, a lack of knowledge about what to buy and buying just a couple of bullets, Egan said.

“If the customer is not expressing a future with the gun,” it’s a red flag, he said.

Every situation is different, he said, but the training gives store owners and employees the tools to ask the right questions and refer them to resources available in the community.

Egan and Brandi McConnell, with the Office of Suicide Prevention, also attend gun shows that take place in Las Vegas to talk to gun owners about gun safety.

“The reaction is very positive,” Egan said. “They are appreciative that we are able to provide this to our community.”

Elaine Frank, chairwoman of the New Hampshire Firearms Safety Coalition, began the effort in that state to educate gun store owners about four or five years ago.

The idea started after three unrelated people bought firearms from the same shop in a five- to six-day time frame and used the weapons to commit suicide, Frank said.

Research found that about 10 percent of New Hampshire’s suicides involved a recently purchased firearm, but the story was “weird” enough that officials thought something had to be done.

Packages with various suicide awareness materials were mailed to all 65 gun stores in the Granite State. Officials followed up with a visit to all the stores and found that some 48 percent of the shops were displaying some of the suicide prevention materials. Among the feedback New Hampshire received from gun stores not participating was that the store owners felt that gun stores were being blamed for gun suicides.

At this point, it is not known how effective the program has been.

“The change, if we see it, it’s going to take a while,” Frank said Thursday.

Since the beginning of the program, the state has received inquiries from about a dozen states including Nevada, Michigan, Tennessee and New York.