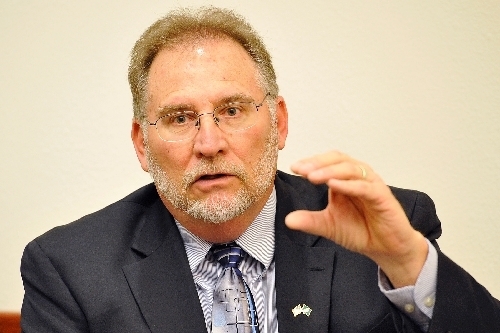 CARSON CITY — Nevada’s Medicaid caseload is climbing above projections even before residents who are newly eligible because of the federal health care law are counted, state Health and Human Services Director Mike Willden said Thursday.

The reason is largely due to the individual insurance mandate under Obamacare, he said.

The division historically has processed about 12,000 applications each month for Medicaid and the state’s children’s health insurance, Nevada Check Up. That number hit 38,000 in December, however.

The federal Patient Protection and Affordable Care Act mandate that people have health insurance has spurred low-income Nevadans, who may have always qualified but never applied for Medicaid, to seek coverage, Willden said.

“We will not see the numbers that include the newly eligible population until the January statistics are compiled,” he said.

Nevada’s Medicaid caseload is expanding further this year to cover a new group of eligible residents: low-income adults ages 19 to 64 who do not qualify for either the cash grant Temporary Assistance to Needy Families program or Medicare.

Gov. Brian Sandoval proposed to expand Medicaid under the new health care law in the 2013 legislative session, and the Legislature approved the recommendation. These newly eligible Nevadans will have the cost of their Medicaid coverage paid for entirely by the federal government for three years beginning Jan. 1, 2014.

About 78,000 Nevadans are expected to be eligible for the program as a result of the expansion.

Sandoval sought the expansion even though he opposed the federal health care law in a lawsuit along with a number of other states.

The state Medicaid budget totals just under $2 billion this fiscal year, with nearly $521 million of the total coming from the state general fund, according to the Nevada Legislative Appropriations Report.

The state Division of Welfare and Supportive Services received approval to hire 248 additional staff by the end of February and an additional 162 by December to handle the increased number of Medicaid applications. To date, the agency has hired 244 new staff to process and manage the paperwork.

Prior to the new health care law, about 600,000 Nevadans were without health insurance coverage. Nevada had the second highest rate of uninsured at 22 percent of its population compared to a national average of 16 percent. The uninsured population in Nevada is expected to decline to 10 percent by the end of 2015 as a result of the new law.