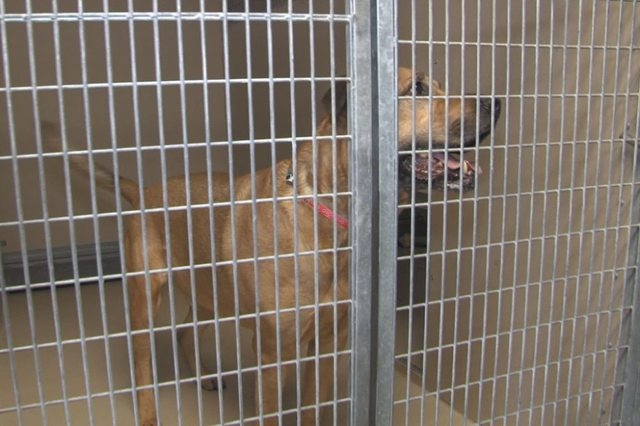 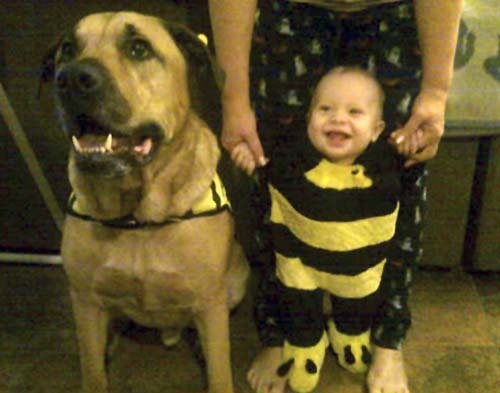 Jeremiah Eskew-Shahan, right, is pictured with the family dog, Onion, in this undated family photo. Onion, who had recently turned 6 years old, killed the boy after the boy's first birthday party. (Courtesy/Christopher Shahan) 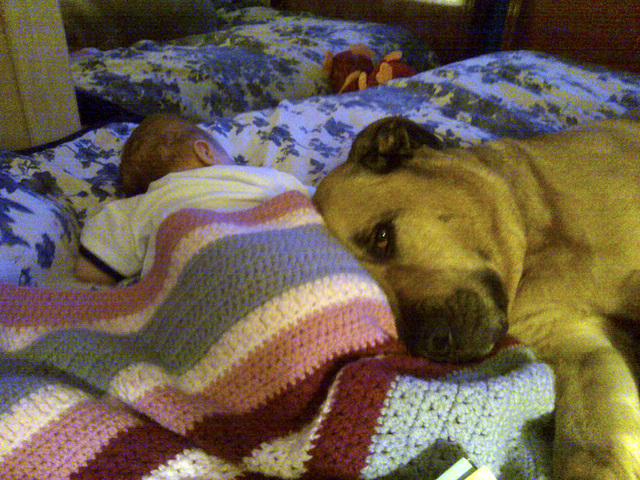 CARSON CITY — Onion the dog has won a reprieve from the Nevada Supreme Court just in time for Christmas.

The court, in a 4-3 decision, has returned the case involving the Henderson dog that killed 1-year-old Jeremiah Eskew-Shahan in 2012 to Clark County District Court for an evidentiary hearing to determine ownership of the animal.

It wasn’t immediately known how soon a hearing will be held, but it isn’t unusual for court cases to take months.

The city of Henderson decided to euthanize Onion after he killed the child, which the family called a tragic accident. The Lexus Project, an animal rights group based in New York, is trying to save Onion and move him to a Colorado sanctuary.

The Supreme Court decision reverses a ruling by District Court Judge Joanna Kishner that favored the city of Henderson.

Richard Rosenthal, general counsel and co-founder of the Lexus Project, said Friday the ruling is a victory for animal rights efforts and for the rule of law in Nevada.

“Onion got a holiday present and we’re absolutely thrilled,” he said.

But not all agreed with the ruling. Colleen Lynn, founder and president of Dogsbites.org, a national dog bite victims’ group, said: “I hope the evidentiary hearing once and for all resolves that an out-of-state rescue cannot disrupt local proceedings through questionable legal interference after a dog has fatally mauled a human being.”

At issue is whether Onion’s owner, Elizabeth Keller, voluntarily surrendered ownership of the dog to the city on the day of the incident.

Rosenthal said that Keller’s decision was made under duress and there will now be an evidentiary hearing to determine whether the surrender was voluntary.

Henderson officials said Keller, the child’s grandmother and owner of Onion, properly gave up ownership to the city on the day of the accident.

If the decision in the evidentiary hearing is that the transfer was signed under duress, then the Lexus Project can make its claim for the dog, Rosenthal said.

“The Supreme Court said that no matter what the situation, the court has an obligation to look at what happened and make a determination based on the facts,” he said. “The decision has to be made on facts, not on convenience.”

Rosenthal said the dissent was based primarily on the fact that Keller did not exhaust her administrative remedies to challenge the transfer of ownership. But in oral arguments in the case in July, he noted that Keller was never informed of any administrative opportunities to contest ownership.

Onion has remained in the control of the Henderson Animal Care and Control Facility since the incident.

Gina Greisen, president of Nevada Voters for Animals, said another important point was revealed in a separate court document related to Onion, which is the fact that he is now getting regular exercise.

The information is contained in a motion filed to expand a stay in the case to require exercise and other needs for Onion as his case continues.

It indicates that Onion is getting at least two walks per week of at least 10 minutes, which began in late November. Until then Onion was kept in a large cage without any exercise.

“We see it as a huge victory that the dog is being walked,” Greisen said. “Our main concern from the beginning has been the care of the dog. We’ve been fighting months for this.

“We hope the city will finally realize the dog is in their care and they need to provide for his physical and mental well-being,” she said.

Bud Cranor, director of communications for the city, said the city is reviewing the ruling and will now determine the best way to move forward.

“Onion is a vicious animal that killed a child,” he said. “In the meantime the dog is in good condition and remains at animal control where its health, exercise and diet are monitored constantly by a veterinarian.”

The Henderson incident could not be more tragic, according to records filed with the court.

On April 27, 2012, Jeremiah Eskew-Shahan was celebrating his birthday with his father, grandmother and other family members at their Henderson home.

Onion was celebrating a birthday as well, and both received presents, including squeak toys for Onion, according to the appeal filed by attorneys for the Lexus Project.

Onion had become a family member as a puppy, serving as an emotional therapy dog to help Jeremiah’s grandmother, Elizabeth Keller, keep her spirits up while battling lung cancer.

Onion had been around Jeremiah all his life and had never snapped or growled at him, according to the family.

About 10 p.m. Keller was putting Jeremiah to bed but thought he wanted to say goodnight to Onion. Jeremiah tripped and fell onto Onion who was resting in a dark room. Onion grabbed and shook Jeremiah.

The child was severely injured in the brief attack, including having the right side of his face forcibly torn from his forehead down to his chin. He died from his injuries.

As a result of the incident, an officer from Henderson Animal Care and Control arrived at the scene and, in the confusion, Keller signed a document giving ownership to the agency and allowing Onion to be euthanized for being a vicious dog.

Rosenthal said that Onion, a 120-pound mixed breed, had never shown any aggressive behavior before.

Henderson Assistant City Attorney Brandon Kemble had asked the court to uphold the lower court decision that found the New York-based Lexus Project had no standing to challenge the decision by Henderson officials to euthanize the dog.