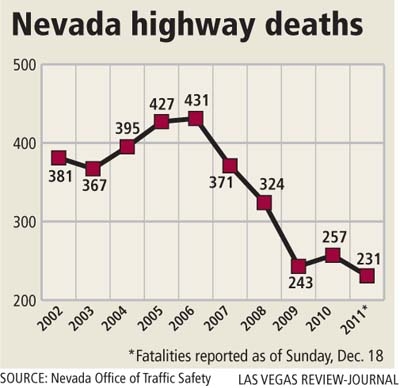 CARSON CITY — Despite a slight increase in pedestrian deaths, the number of people killed in traffic accidents in Nevada plunged in 2011 and will end the year at slightly more than half of the record 2006 total.

In Clark County, 105 people have died on the highways this year, down 25 for the same time span last year.

“People are getting the message,” said Traci Pearl, administrator of the Nevada Office of Traffic Safety.

She attributes the decline to more attention on the part of drivers, more enforcement by police, less drinking and driving and the wearing of seat belts. Pearl warned residents to be particularly careful during the Christmas and New Year’s periods because people may be drinking at holiday parties.

Pearl said Monday her office has a “zero fatalities goal.”

Through Sunday, 42 pedestrians had died in Nevada, more than the 41 killed in 2010. Twenty-eight of them died in Clark County, two fewer than in 2010.

Las Vegas was ranked the sixth-most dangerous city for pedestrians in the spring by Transportation for America, a Washington, D.C., advocacy group. It found 2.5 pedestrian deaths per 100,000 residents per year, above the 1.6 national average.

But that study does not factor in the number of tourists who visit Las Vegas, which is expected to be near the record of
39 million this year.

Reno reported nine pedestrian deaths, up from four in 2010. The Reno deaths included J.K. Metzker, a popular television sports broadcaster killed crossing a busy street adjacent to the University of Nevada, Reno campus after a football game. He was not crossing Virginia Street at a designated pedestrian crosswalk.

Part of the reason for the decline in fatalities also may be because people are not driving as much, Pearl said. But she said the National Highway Traffic Safety Administration, which compiles the fatality rates per 100 million miles driven, does not have recent figures for Nevada.

That federal agency said in 2010 there was a slight increase of 0.7 percent in miles driven nationally, but a 3 percent decline in highway deaths, to 32,788, across the country. Pearl added Nevada’s drop in highway fatalities since 2006 is the fifth-best among the states.