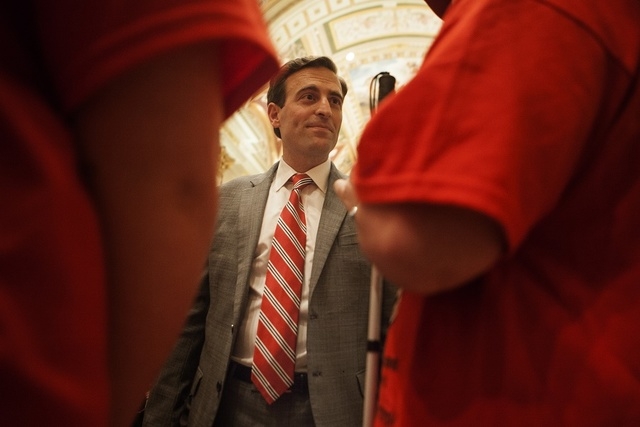 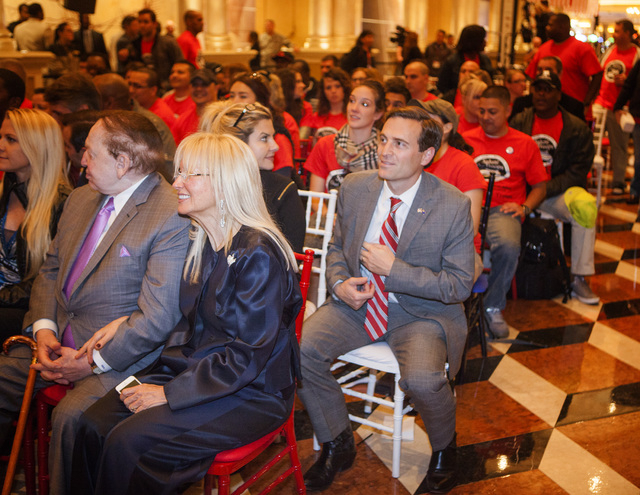 Nevada Attorney General-elect Adam Laxalt, right, sits behind multibillionaire Sheldon Adelson and his wife, Miriam, during the Salute our Troops welcome ceremony at The Venetian on Wednesday, Dec. 03, 2014. Laxalt, a former Navy judge advocate general, wants his AG's office to offer free legal aid to veterans by redirecting some office resources and getting private attorneys to donate their time as well. (Jeff Scheid/Las Vegas Review-Journal) 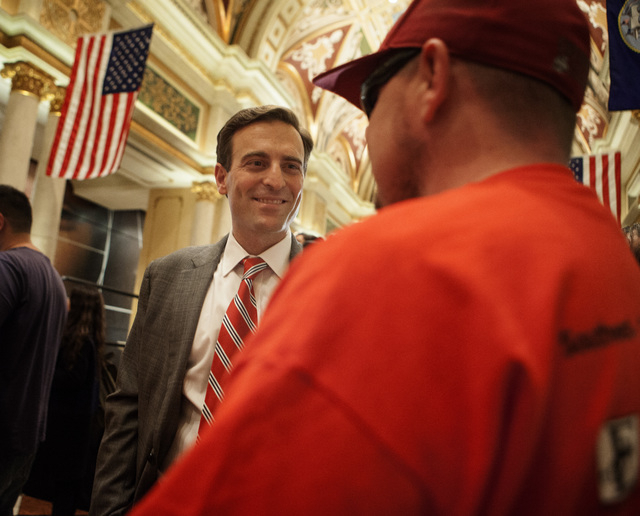 On a recent Wednesday, Adam Laxalt sat in the foyer of The Venetian to help welcome to Las Vegas some 80 American “wounded warriors” who had served in Iraq or Afghanistan.

The members of the military, including those who had lost limbs in combat, were hosted by Sheldon Adelson, owner of the casino and the Las Vegas Sands Corp., who picked up the tab to show his gratitude.

Laxalt himself is a veteran, helping prosecute terrorists and militants in Iraq in 2006 when the lawyer was a Navy judge advocate general.

“It’s just a gut-wrenching thing to see,” Laxalt said afterward, speaking of the men and women who paid a personal price for their military service.

Now that Laxalt has won election as Nevada’s new attorney general, he’s in a position to help his fellow veterans. One of his priorities is to set up a state office that will provide free legal help to veterans and their families, he said. He would use some current office resources and recruit private attorneys to provide pro-bono work for the private-public partnership, according to the plan.

“I’m very optimistic it can be done,” Laxalt said. “Anyone that I speak to, whether active duty or a veteran, after about two minutes they say it’s a great idea. There’s a definite gap in our system.”

Laxalt has recruited former Assemblyman Wes Duncan, R-Las Vegas, to help him with the effort as his top assistant attorney general. Duncan resigned his Assembly seat to join Laxalt, a fellow Iraq veteran. Duncan served in the Air Force.

In his first in-depth interview since winning election Nov. 4, the Republican Laxalt laid out his policy priorities and plans for running Nevada’s top law enforcement office.

He said he wants to continue many of the programs started by current Attorney General Catherine Cortez Masto, a Democrat who fought domestic violence and human trafficking.

Cortez Masto has been helpful during the transition, he said, calling her “a role model” in how she has run the office during the past eight years.

Laxalt said he wants to continue her example of protecting Nevadans from harm and criminal scams. He also has made it a priority to process a backlog of some 4,000 rape kits that have been sitting on the shelves in counties across the state.

He said he will work with Nevada’s 17 counties and private entities to clear up the backlog.

And he said he’s organizing the first attorney general summit to invite the state’s 17 sheriffs and 17 district attorneys to Carson City early next year to discuss law enforcement challenges, from drug use to violence.

“This office is uniquely situated to see growing trends and do something to address any problems,” said Laxalt, whose campaign won widespread support from sheriffs and district attorneys, especially in rural Nevada.

His victory over Democrat Ross Miller was one of the biggest upsets of the election. Miller, who had served two terms as secretary of state, was far better known and had raised $1 million before Laxalt even announced he would enter the race.

Miller also is the son of former Gov. Bob Miller, a popular Democrat who served 10 years and who campaigned for his son. Laxalt is the grandson of former U.S. Sen. and Gov. Paul Laxalt, a GOP icon in the state.

Miller was vulnerable in part because he accepted more than $70,000 in gifts while in public office,including tickets to shows and fights as well as educational forums he said helped him do his job. Laxalt criticized Miller for accepting the gifts, which he said raise conflict and ethics issues.

Laxalt said he plans to promote legislation making it illegal for the attorney general to accept gifts.

“If you’re a lawyer, you have to be above the fray,” Laxalt said. “You don’t want to give anyone the impression that you can be influenced.”

Laxalt said he’s not sure if he’ll introduce the bill himself or whether he will get a lawmaker to do it for him. His predecessor, Cortez Masto, already has proposed 20 bill drafts, the maximum allowed by the office. So he might amend one of those bills or seek separate legislation, he said.

TO FIGHT FOR STATES’ RIGHTS

Laxalt has big ambitions for the attorney general’s office. He said Nevada needs to make it clear to the federal government that the state is prepared to file a lawsuit if its rights are trampled upon.

For example, the federal government is considering listing the sage grouse as an endangered species. The designation decision could come before the end of the year, but the deadline is September. Such a designation would protect tens of thousands of acres of land that is used by the mining, cattle and other industries, which argue economic development would be devastated by the listing.

Laxalt already has threatened to sue, either joining other states in litigation or filing a separate lawsuit. He said that’s the only way Nevada can ensure it has a voice in the process involving federal decisions.

“It’s important for me to make sure the attorney general’s office is adequately defending the state from any federal legislation that’s hurting our jobs and hurting our economy and that’s taking away our liberty,” Laxalt said. “That’s a priority of mine — to reset the bargaining table just to make clear that we as a state have full input in future federal actions.”

Attorneys general across the country are becoming more active on a range of issues. Last month, Laxalt was among the incoming attorneys general and those already in office who signed a letter objecting to President Barack Obama’s executive order on immigration. The order allows up to 5 million undocumented immigrants to stay in the United States without fear of deportation for at least several years. The president said he acted because Congress didn’t approve comprehensive reform.

Laxalt said signing the letter is as far as he’s prepared to go at this point, although more than a dozen states are suing the government over Obama’s immigration executive order.

Laxalt said it’s important to pick the right battles and focus on only a few of the most important things in order to succeed.

“It’s such a great office to get a lot of things accomplished,” Laxalt said. “My problem is to make sure we don’t do too much.”

GOP Gov. Brian Sandoval is Laxalt’s top client. The governor endorsed Laxalt’s campaign, and the incoming attorney general said, “I’m looking forward to having a strong relationship with the governor.”

Laxalt will be sworn in on Jan. 5 with Nevada’s other constitutional officers.

At age 36, Laxalt is among the thousands of veterans who served in Iraq and Afghanistan and now are prepared to lead at home, he said.

“They can lead. We’re new blood,” Laxalt said. “Whether Democratic or Republican, we just need a new generation that’s ready to step in.”

Nevadans have often been frustrated over the years by the federal government’s ownership of vast tracts of land, at least 85 percent of the state. The congressional delegation has been working on land deals that would allow swaps to protect some lands while developing others.

Laxalt said he doesn’t know at this point whether there’s any legal remedy to pursue on public lands, especially because federal ownership was established in Nevada’s Constitution.

When it comes to how land is used, however, that’s another matter. He said he is opposed to the federal government building a nuclear waste repository at Yucca Mountain over the objections of most Nevadans and officials. He said he would back any state lawsuit to block its development.

“I’m opposed to Yucca, and I plan on continuing the defense of the state,” Laxalt said, adding there’s “no daylight” between his position and other Nevada officials who have long fought the repository.

Like many Republicans, Laxalt also was opposed to Obamacare, the president’s health insurance law, which was upheld by the U.S. Supreme Court. Nevada initially joined in a lawsuit challenging the legislation, but Attorney General Cortez Masto refused to take on the case. So Sandoval got a private lawyer to handle the lawsuit — Mark Hutchison, a state senator who just won election as Nevada’s lieutenant governor.

Laxalt has suggested he would have followed orders and taken on the Obamacare lawsuit because it’s the attorney general’s job.

On another hot-button issue, gay marriage, Laxalt is personally opposed to same-sex marriage just as Sandoval is, believing marriage is between a man and a woman.

But both men have recognized society and court decisions are changing on the matter.

In October, the 9th U.S. Circuit Court of Appeals declared Nevada’s law banning same-sex marriage unconstitutional after Sandoval and Cortez Masto refused to defend it, agreeing it was flawed in light of recent court cases. The case is probably headed to the U.S.Supreme Court.

Laxalt said that whatever the outcome is, he will defend Nevada law — even if gay marriage is ultimately ruled legal and an equal right.

“For me, it’s all about the rule of law,” Laxalt said. “I want to make that a hallmark of our term and make sure we stand for a nonpartisan way of doing things and for the rule of law, whether I agree with the outcome or not. For me, it’s (the job) to defend the law.”