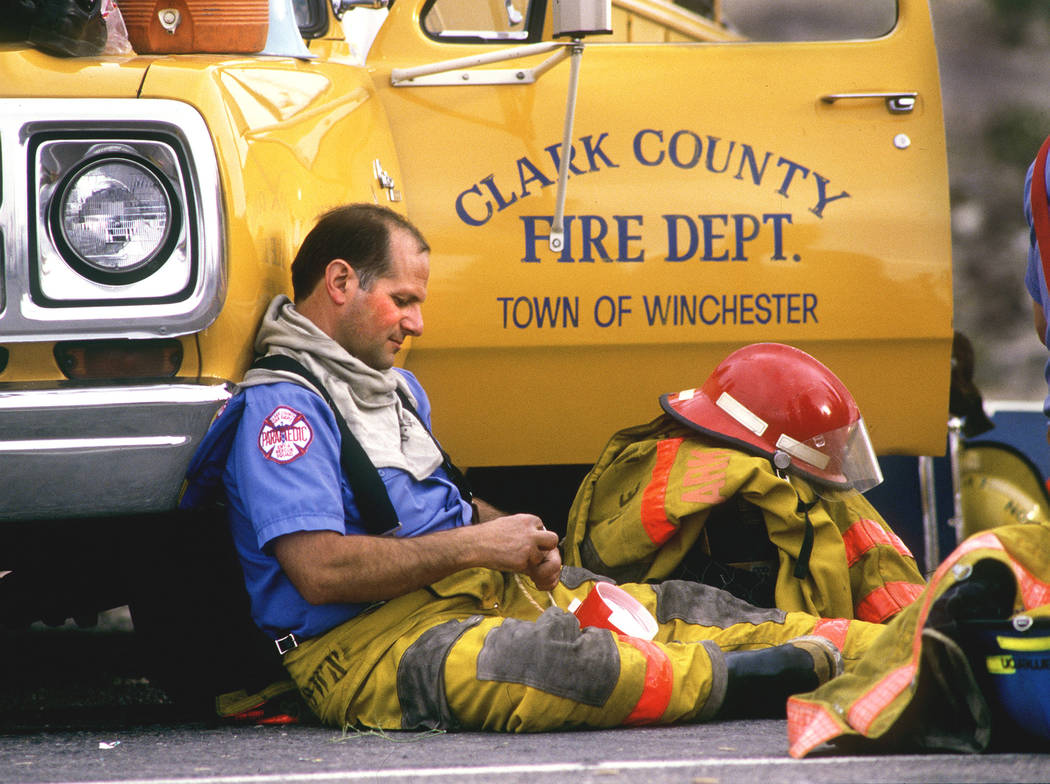 A paramedic takes a break while working the explosion disaster at the PEPCON (Pacific Engineering & Production Co. of Nevada) facility in Henderson, May 4, 1988. The huge blast broke windows as far away as downtown Las Vegas.(Jeff Scheid/Las Vegas Review-Journal) 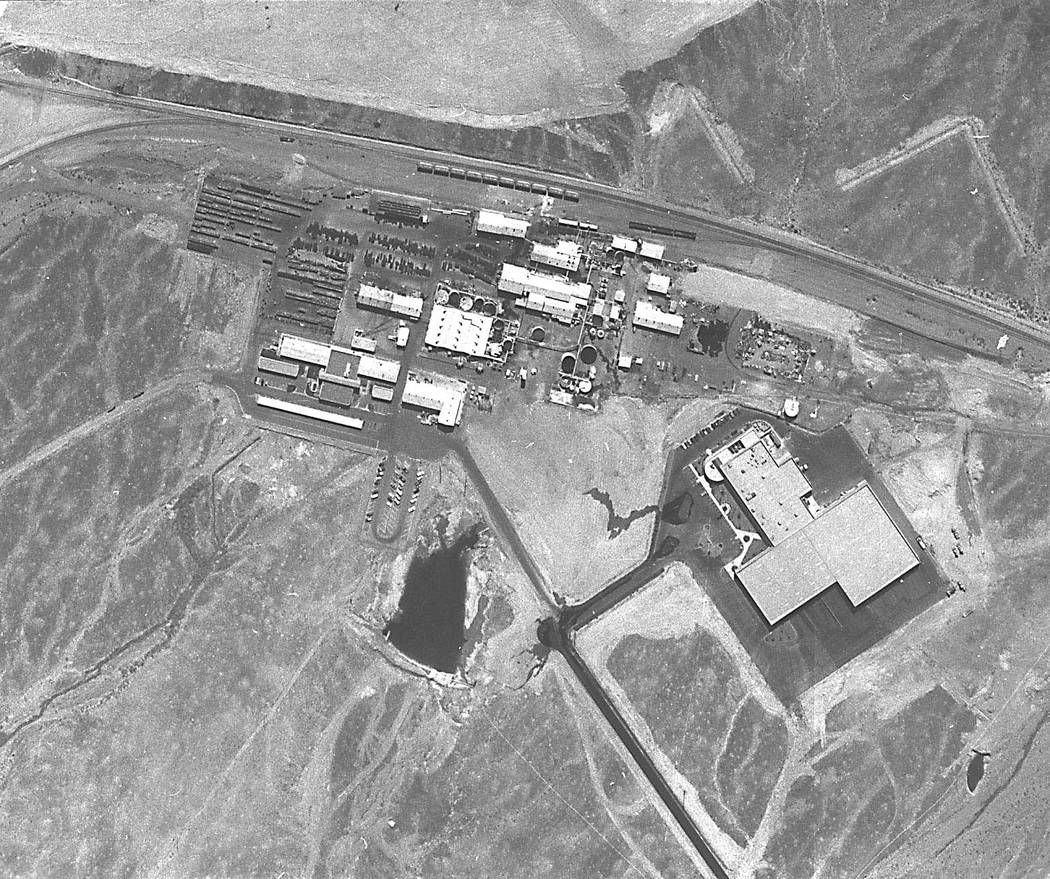 The PEPCON (Pacific Engineering & Production Co. of Nevada) facility in Henderson is shown in this aerial photograph sometime prior to the May 4, 1988 explosions. (Las Vegas Review-Journal archive) 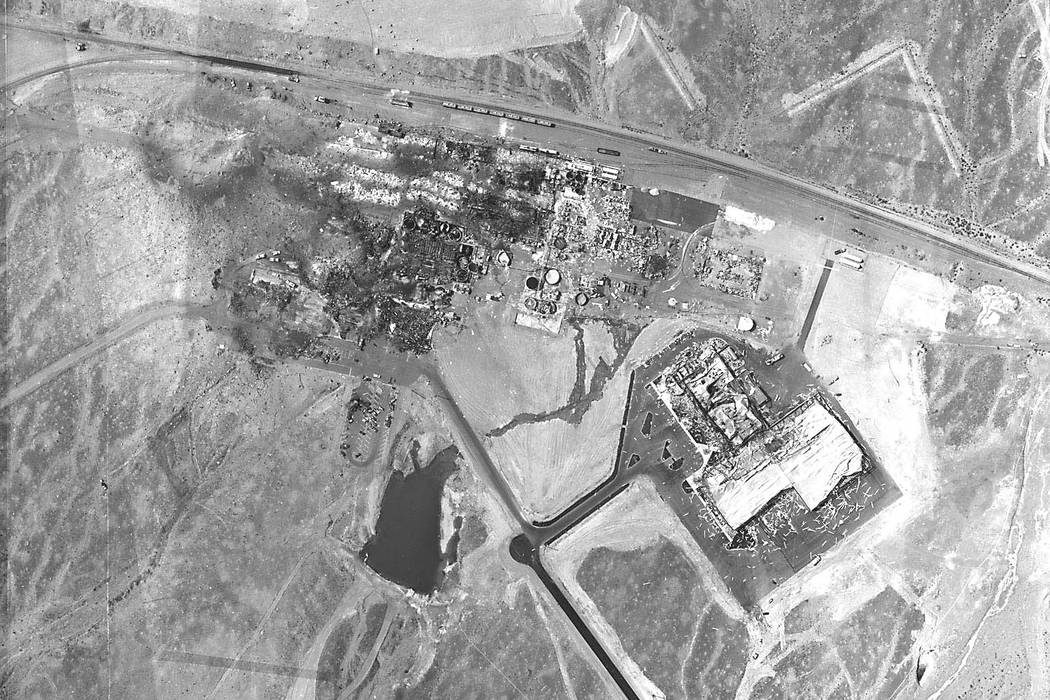 The PEPCON (Pacific Engineering & Production Co. of Nevada) facility in Henderson is shown in this aerial photograph sometime after the May 4, 1988 explosions. 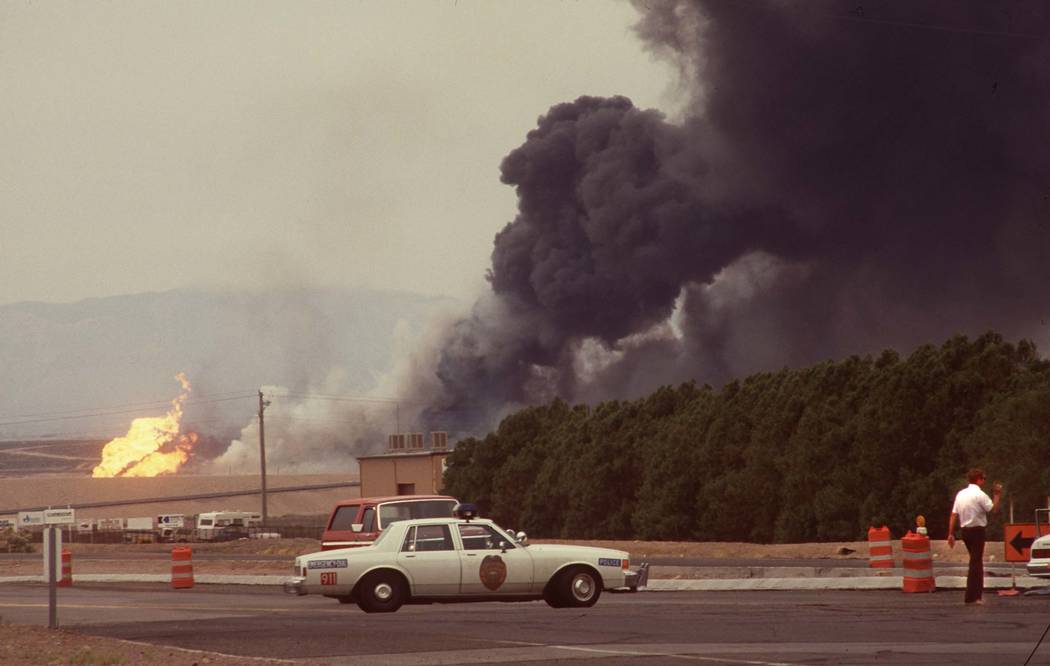 Sound and smell are my most vivid memories of the PEPCON explosion 30 years ago.

On May 4, 1988, I was the Las Vegas bureau of one for the Reno Gazette Journal, and Howard Stutz was the gaming reporter for the Las Vegas Review-Journal. We were covering a Nevada Gaming Control Board meeting on East Flamingo Road when the first boom shook the building.

Incredibly loud, it felt as if the explosion had punched through my body. Stutz thought a plane had hit the building.

With no idea what had happened, we rushed to call our offices. He was told “a rocket fuel plant exploded.” Since we were not direct competitors and were friends, we jumped in my car and drove toward the smoke.

The smoke in the sky could have included a poisonous chemical gas. We didn’t know, but we knew it was news. Without cellphones or computers, we listened to an all-news radio station to find out that the explosion had been at the Pacific Engineering & Production Company of Nevada.

Our efforts to get close to the explosion were blocked by police, so we decided to drive to a nearby residential area to interview people and survey damage.

Summer Wilson turned 5 that Wednesday. Her Nuevo Street home was about two miles from the blast. Her mother said her daughter asked: “Am I going to die on my birthday, mommy? Are there going to be more bombs?”

She didn’t die, but two men did and 372 people were injured.

The next day, I was one of the journalists bused to the site. It looked like a war zone. The plant was destroyed. But the smell was wonderful, an aroma reminiscent of s’mores. My eyes and nose were in incongruous conflict.

The plant next to PEPCON was Kidd & Co., a marshmallow plant. Like PEPCON, it too was demolished.

PEPCON produced ammonium perchlorate for use in rocket fuels and was critical to the space program. The origin of the fire has been debated over the years. Was it a gas leak? A spark from a welder’s torch? Negligence at the plant? Various studies came up with various answers about the cause.

Property damage was estimated at $74 million. In 1992, a global settlement of $71 million was reached, paid mostly by insurance companies representing PEPCON, Southwest Gas Corp. and Clark County, as well as others.

The gas leak theory was rejected by a jury in a case brought when PEPCON and Southwest Gas sued each other.

The Green Valley home of Rick and Judy McSimov was one of the most severely damaged on Nuevo Street.

The explosion blew in their front door and knocked the garage door off its hinges and down to the ground. Windows shattered. Walls cracked. Stucco crumbled.

Stutz recalled seeing a huge designer window at a home that blew inward and fell on a sofa but didn’t shatter.

Mack Elementary School was evacuated. Principal Roger Gehring thought there had been an aircraft explosion. He sounded the fire alarm, and the 900 students filed out to the playground.

When he saw the cloud, he feared it was toxic and told the children they were taking a walking field trip. He was relieved the wind was blowing the cloud away from the school. As I wrote at the time, “Students walked hand in hand along the road, until school officials commandeered private cars to take the students to a nearby park until the buses arrived.”

No one knew if more explosions might follow, so the rescue center was moved to Cannon Junior High, a safe haven for young and old.

Frail patients from a nearby critical nursing home also were transported there, some in wheelchairs, some lying on mats on the floor. The 47 patients relocated knew they couldn’t escape without help.

At one of the reunification centers, fifth-grade teacher Chopin Kiang said, “You saw two kinds of emotion, tears of joy from students finding they were not abandoned and parents crying when they couldn’t find their children.”

I remember the terror, but oddly, it’s the smell of marshmallows that remains with me 30 years later.

And the feeling of that incredible force pounding my chest again and again.

Afterward, I often think about the many reporters and photographers in the valley, without masks, without knowing if we were rushing toward poison of some kind, who just went toward the smoke. We knew it was our job to respond, no matter the risk.

Just like first responders rush to a scene, no matter the risk.