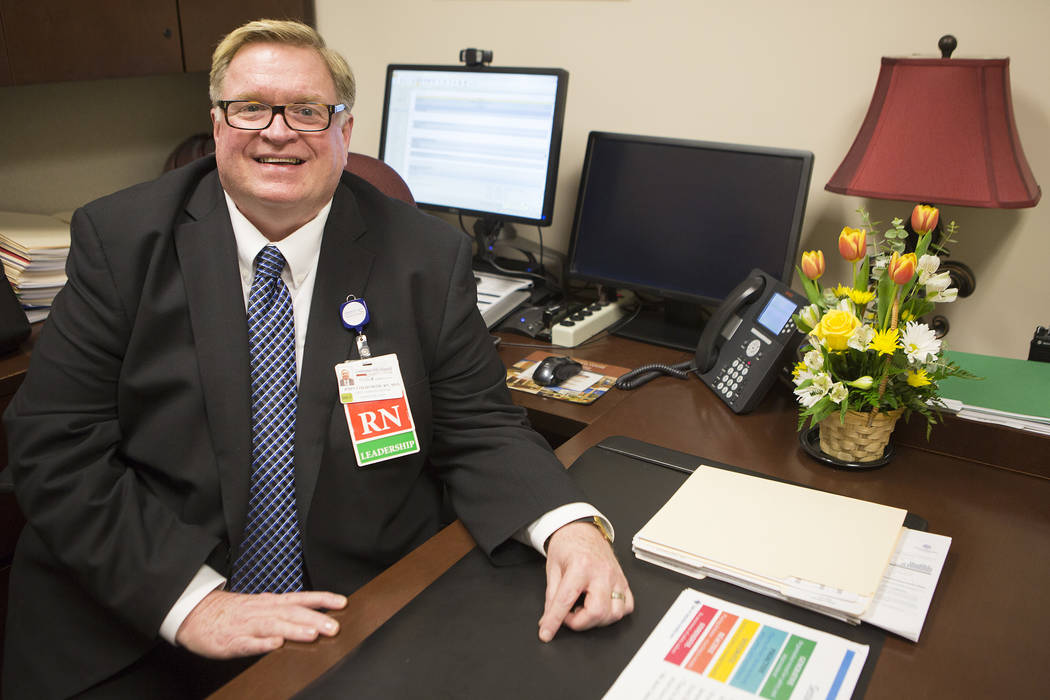 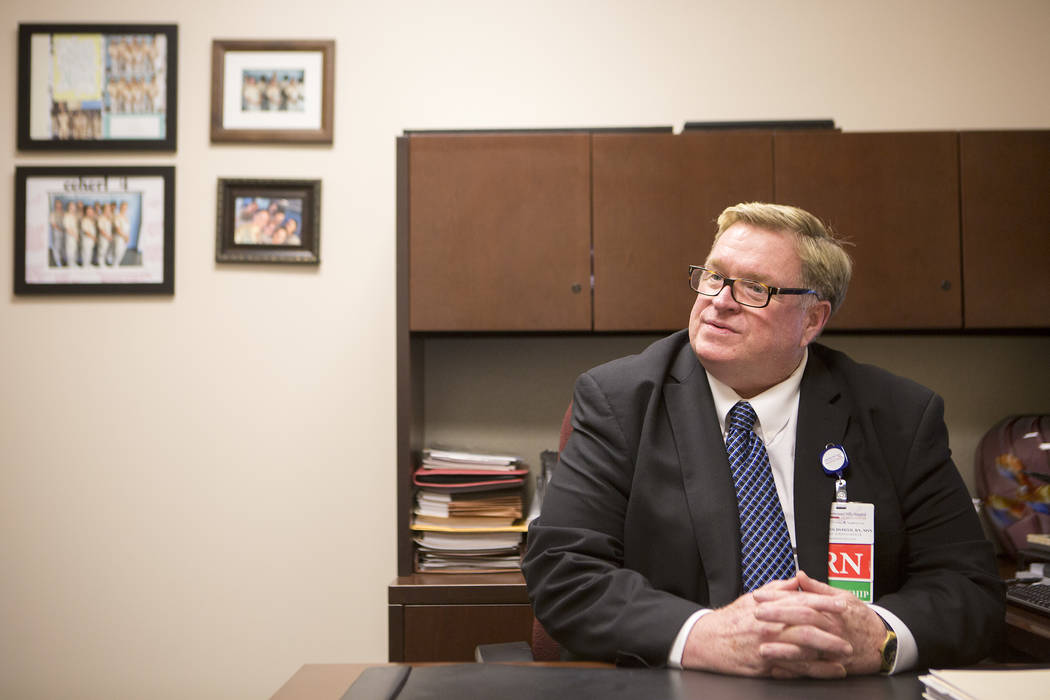 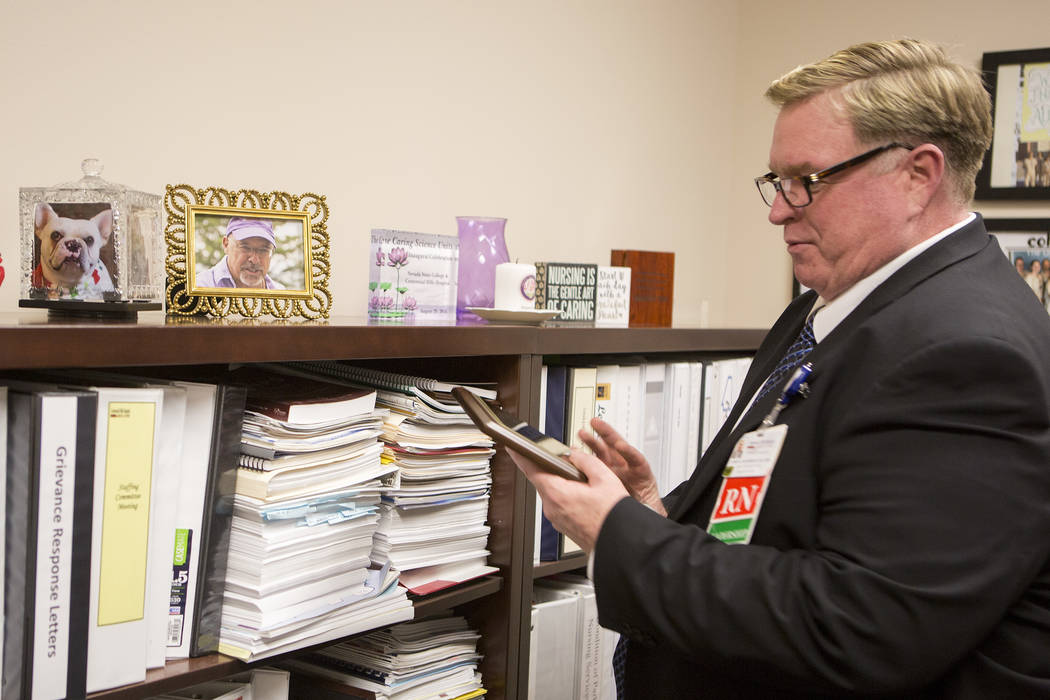 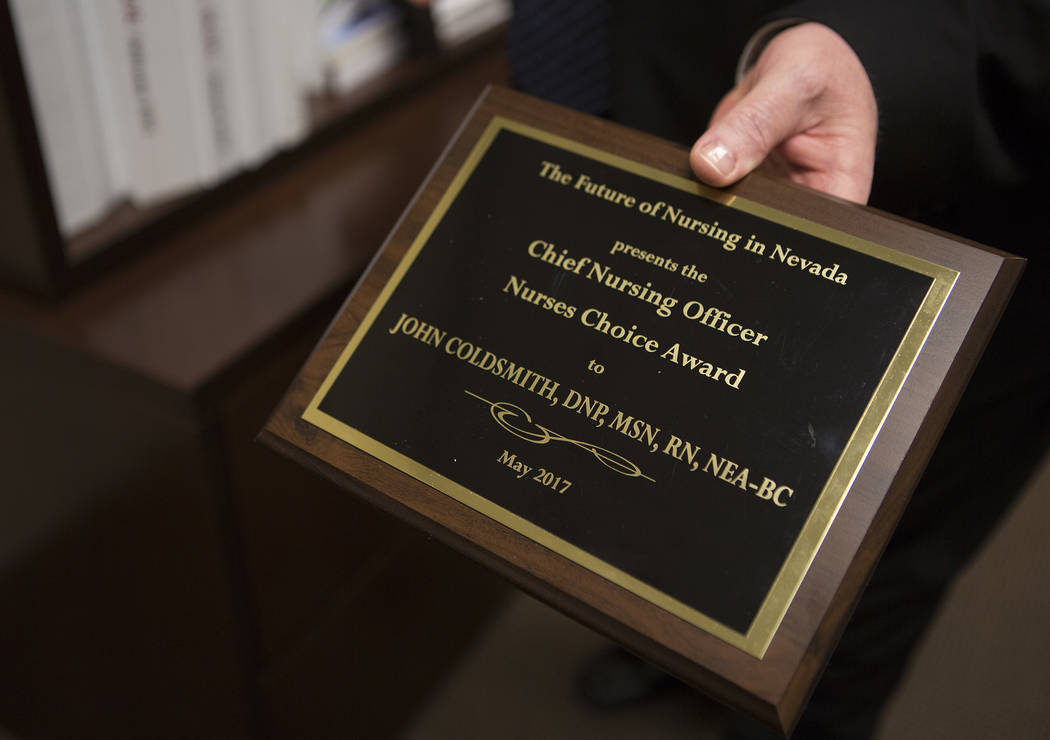 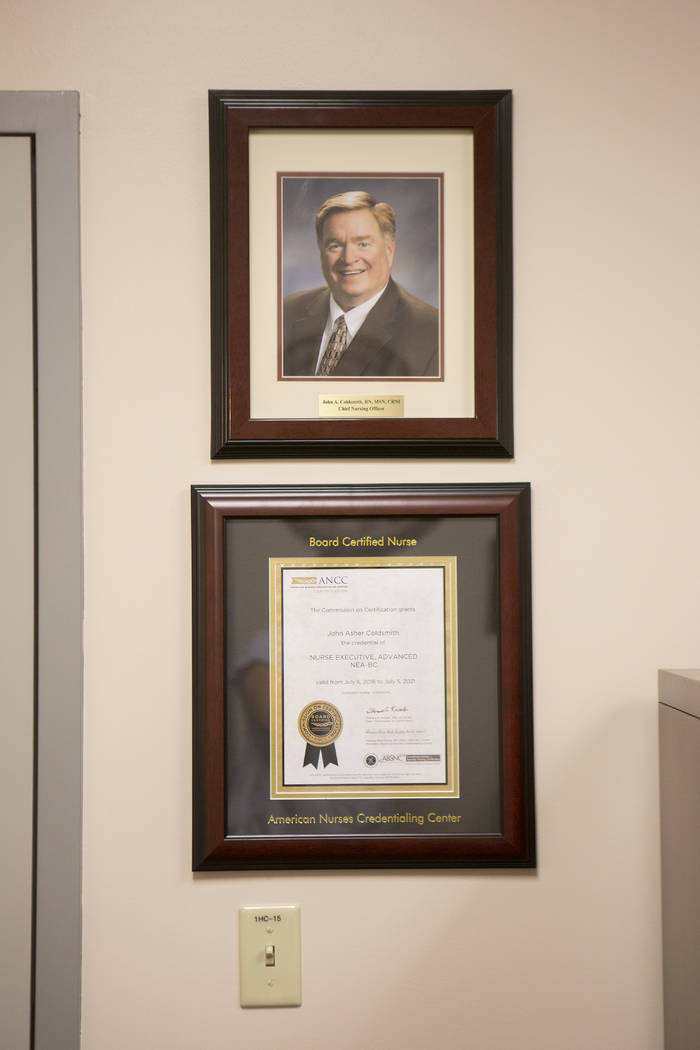 A portrait of chief nursing officer John Coldsmith is dismayed in his office at Centennial Hills Hospital on Wednesday, May 24, 2017, in Las Vegas. (Bridget Bennett/Las Vegas Review-Journal) @bridgetkbennett 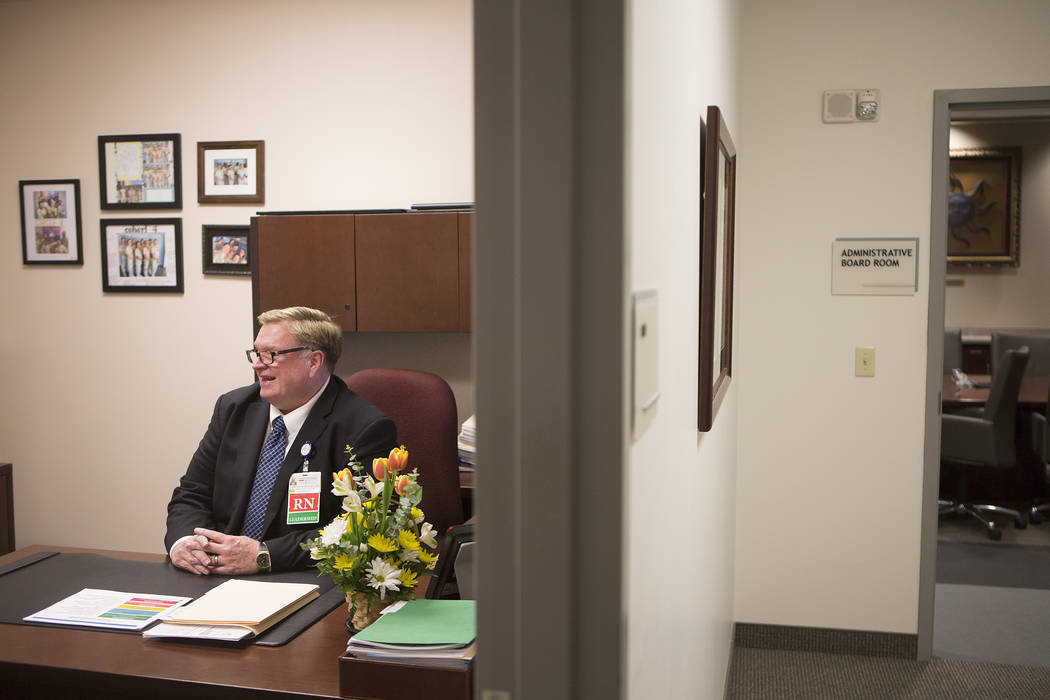 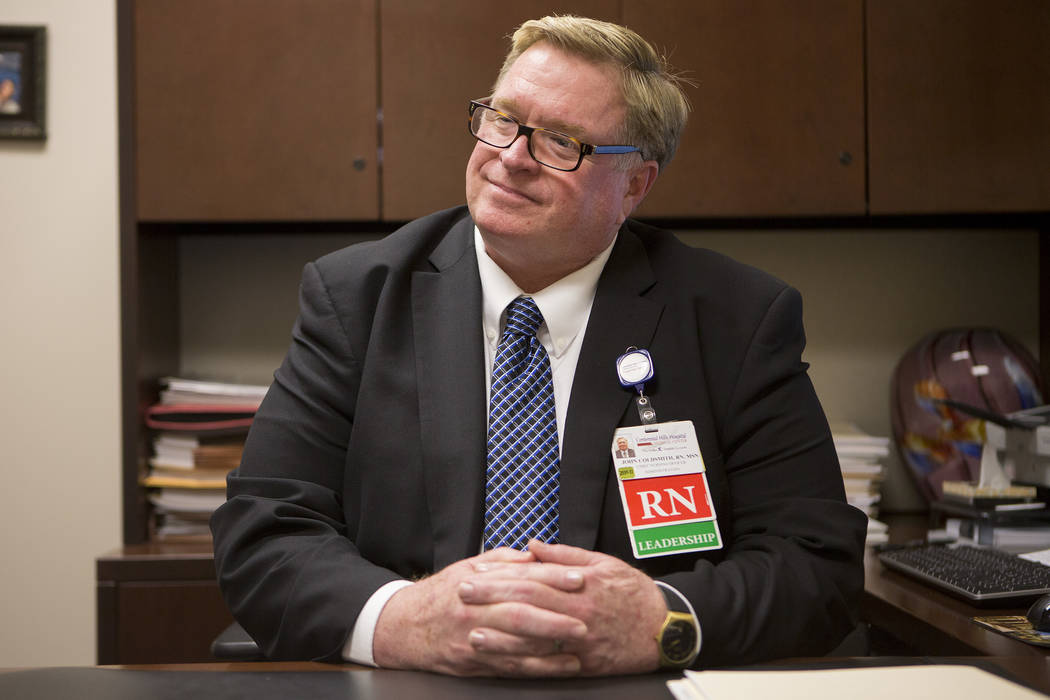 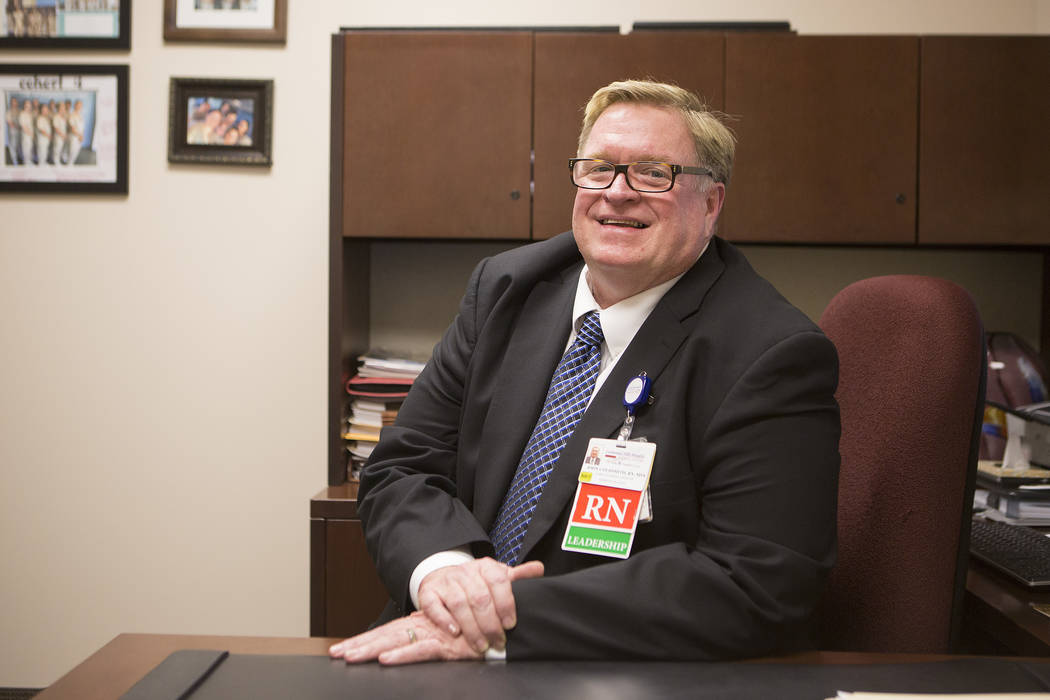 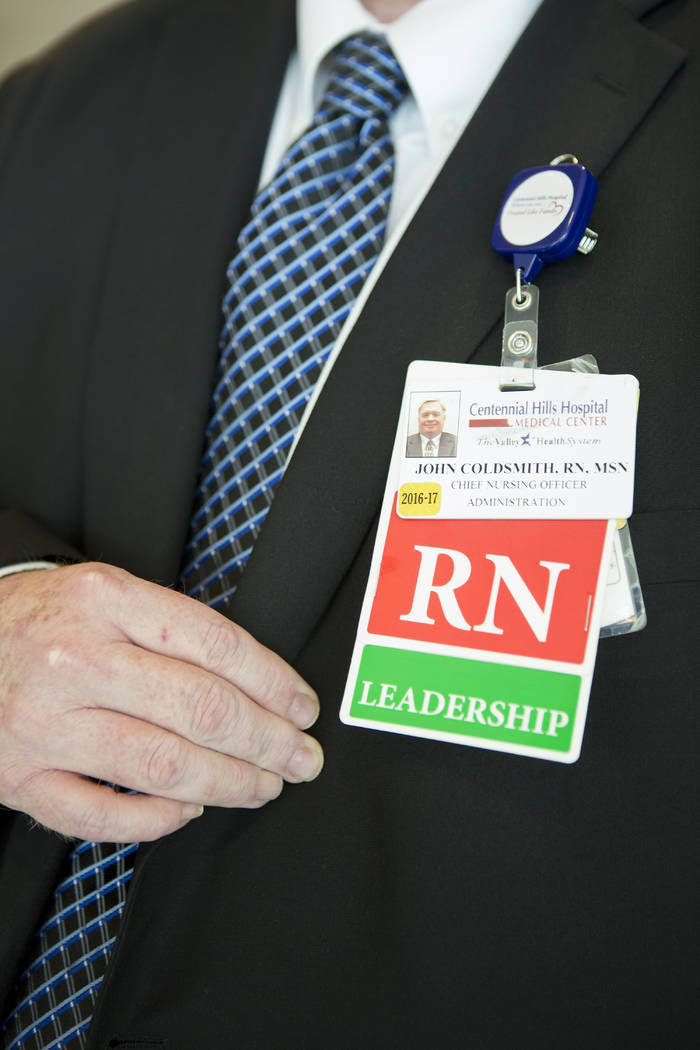 Unlike most chief nursing officers at hospitals, John Coldsmith knows how to milk a cow.

Yes, the CNO at Centennial Hills Hospital Medical Center can tell you that it’s best while milking to sit or squat in a position that will allow you to move away quickly if the cow becomes uncooperative.

Now this 62-year-old baby boomer will be the first to tell you that the expertise in milking that he developed as a boy — squeeze down on the teat to push out the milk, maintaining your grip on its base so that the milk doesn’t flow back up into the udder — doesn’t directly translate into becoming a good nurse and medical executive.

But, indirectly, that’s another story.

You see, he believes growing up on a dairy farm in Pennsylvania has been responsible for the work ethic he’s maintained in more than 40 years of work in hospitals. Today, while in Centennial’s top nursing position, he’s still up at 4 a.m. and checking on what’s going on at the hospital an hour later.

“You’re never afraid of hard work after growing up on a dairy farm,” he said, laughing as he sat in his hospital office. “I delivered calves when needed, drove a tractor at a single digit age. You’re going to develop a strong work ethic. Have to.”

He believes that work ethic — he helped develop a “Caring Science” program at Centennial that assists in shaping the practices of young nurses — played a key role in his recently being honored by the Nevada Nurses Foundation with its CNO of the Year Award.

The Caring Science program, based on the Human Caring Theory of Dr. Jean Watson, was developed in a partnership with Nevada State College. Student nurses learn that there is far more to nursing that dispensing medications and writing reports — they’re shown how to understand a patient’s frame of reference as he or she works to overcome illness, disease and suffering.

“Compassion for the patient is number one for nurses,” Coldsmith said. “We need to get to know our patients.”

Coldsmith started out as an orderly at a small Pennsylvania hospital. He helped transport patients by wheelchair or gurney; he mopped, disinfected and changed soiled linens.

“I found that helping people was what I enjoyed,” he said. “My dad wanted me to run the dairy farm and wasn’t too happy with me at first. But when he started hearing how well I was doing, that changed.”

At the urging of nurses, he trained to become a licensed practical nurse and then a registered nurse.

“I’m a life-long learner,” he said. “In the last couple weeks I finished my doctorate in nursing. … I had loved the bedside but only got into administration after people convinced me I could make a bigger difference that way.”

His final Ph.D project? Studying the effects of toxic leadership on nursing turnover.

As the former head of communications at a Texas hospital, I know just how important it is for hospital leadership to listen to nurses. If doctors, for example, are allowed to treat nurses with arrogant disrespect, it won’t be long before they find another position. Nurses are in demand.

Having also worked at hospitals in Pennsylvania, New Mexico and California, Coldsmith remembers when everything from bed pans to urinals were washed and reused instead of disposable. He can also remember when people were in the hospital for up to a week for what are now outpatient procedures such as hernia repair.

“There has been a lot of change because of technology — we now have an electronic patient record, for example,” he said. “But compassion for patients can never change.”