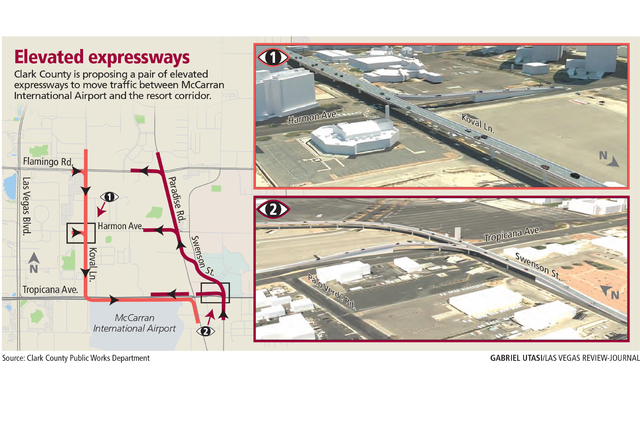 Rarely are governments criticized for moving too quickly on a transportation project.

But that seems to be the case with Clark County’s effort to build an elevated expressway along portions of Koval Lane, Tropicana Avenue, Swenson Street and Paradise Road near McCarran International Airport.

The county unveiled the $200 million proposal in January. The idea is to build two-lane, one-way elevated roads over the tops of existing street rights-of-way.

Bids for the engineering, planning and design of the expressways are due to the county today.

For Koval and Tropicana, the southbound piece, the elevated highway would begin just north of Flamingo Road and would have entrance ramps at Flamingo and Harmon Avenue. When the highway approaches Tropicana and heads east, the elevated portion would dip down to grade level as it crosses in front of McCarran’s north-south runways. Tropicana Avenue traffic, however, would not be able to merge in or out of the expressway.

Once the road turns south onto Paradise, traffic could merge in preparation for splitting to either Terminal 1 or Terminal 3.

The northbound elevated section would begin on Swenson Street just south of Tropicana and includes an option to go over Tropicana, travel west and then merge onto it. The northbound expressway would curve along Swenson near the Thomas & Mack Center, then veer to Paradise Road just north of the Thomas & Mack parking lots. There would be exit ramps at Harmon and Flamingo and the elevated portion would return to grade level just north of Flamingo.

When the plan was unveiled by county Public Works Director Denis Cederburg to the Southern Nevada Tourism Infrastructure Committee in January, it was widely applauded.

But it didn’t take long for some highly respected transportation and urban planners to criticize the plan. Both Tom Skancke, a public representative on the state Transportation Board, and Robert Lang, director of Brookings Mountain West at UNLV, criticized the elevated expressway concept as a “20th century solution to a 21st century problem.” They both advocate the county dedicating its resources to building a light-rail system from the airport to downtown Las Vegas via the Strip. A light-rail system, they argue, would move far more people more efficiently to where they want to go without cars.

Skancke went on record at April’s Nevada Transportation Department board meeting while Lang has written op-ed pieces in the Las Vegas Sun and commented in Las Vegas Review-Journal stories about the issue.

Lang derided the elevated expressway as “a tribute to Robert Moses.” If you Google Robert Moses, you’ll find that his passion was for moving cars and not mass transit. You also may find that many of Moses’ New York projects and clones of them that have been built in other cities are being torn down for various reasons.

Among the prominent projects: San Francisco’s Embarcadero Freeway, the Westside Elevated Highway in Manhattan and Harbor Drive in Portland, Oregon.

In some cases, the expressways produced artificial barriers that split neighborhoods. In some, mass transit systems have been found to be less intrusive and more environmentally sound.

Clark County Commissioner Larry Brown, who came to the defense of Cederburg’s plan at the April Regional Transportation Commission of Southern Nevada meeting, said he likes the expressway concept because it could be built faster than light rail.

Lang disagrees. He said if a plan could be started with local money right away, most of the light-rail design and initial construction could be completed as quickly as the expressway could be built.

Brown said something else that I found a little shocking: If it turns out that light rail is the ultimate transportation solution, the expressway could be torn down in 20 years when trains are ready to roll.

In the background of all this is the possibility of a domed stadium being built on land that is sandwiched between the proposed expressway couplets. One of the biggest concerns of critics of the site of the Las Vegas Sands-Majestic Realty proposal is traffic generation so close to McCarran.

Moving the site elsewhere is under study, but one of the primary purposes of building the stadium at Tropicana and Koval is that it’s close to the University of Nevada, Las Vegas campus.

The whole stadium plan as well as a number of transit options, including light rail, are being vetted by the Tourism Infrastructure Committee.

It seems that it would be wise for the county to do the same.

What do you think, Warrior readers? Full speed ahead on the elevated expressway or dedicate those resources to light rail?

The south Strip and downtown Las Vegas will be be busy places at the end of the week as locals do their best Hoss Cartwright impressions for Helldorado Days.

Although there will be some activity downtown — Thursday night’s Whiskerino, pub crawl and street dance at El Cortez and Saturday’s Helldorado Days parade at 10 a.m., along the traditional downtown parade route (Fourth Street, between Gass and Ogden avenues) — most Helldorado activity has moved south.

Friday, Saturday and Sunday events will be staged at Las Vegas Village, the outdoor festival venue on Las Vegas Boulevard South, across the street from the Luxor.

Booths, a carnival and rodeo grounds will be open from 11 a.m. to midnight Friday and Saturday and until 10 p.m. on Sunday.