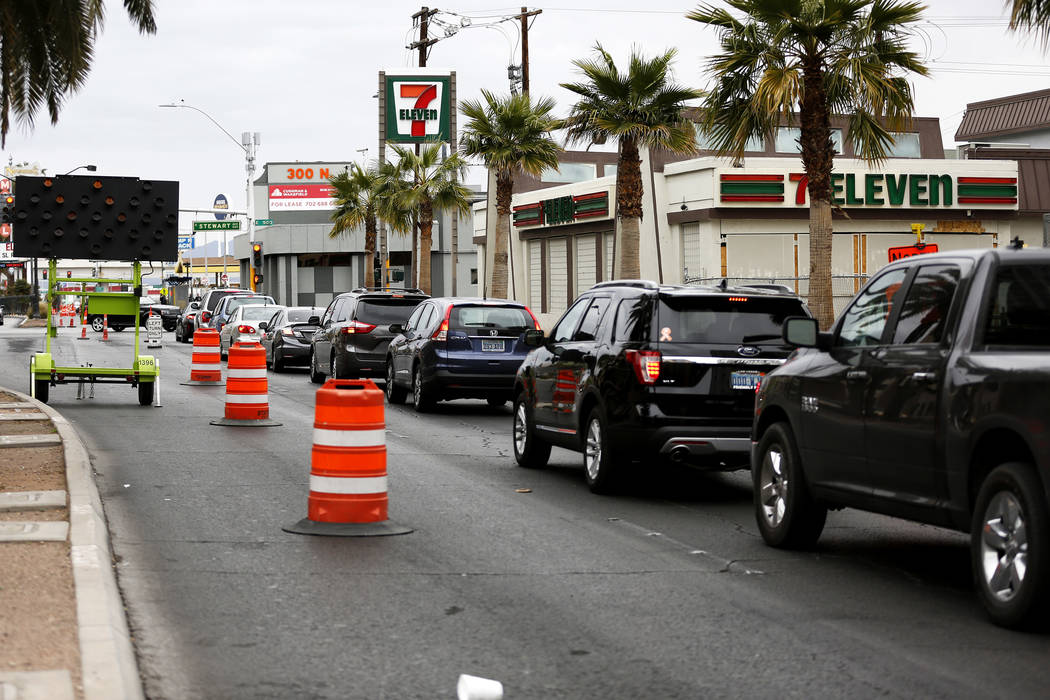 A view of traffic in the downtown area in Las Vegas on Saturday, March 10, 2018. (Andrea Cornejo/Las Vegas Review-Journal) @DreaCornejo 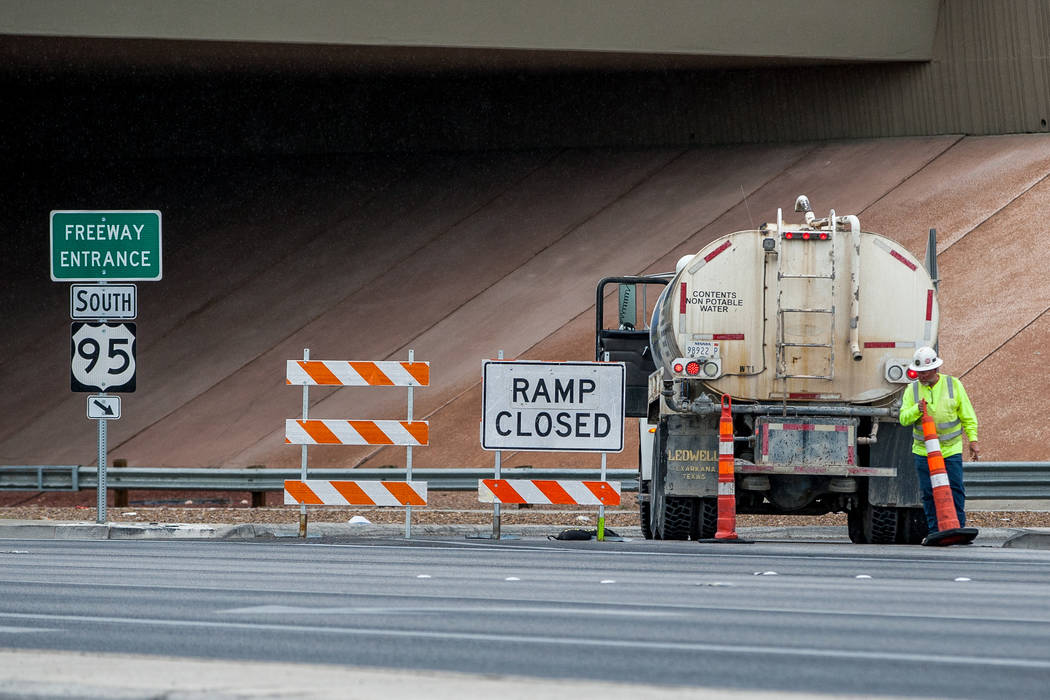 A construction worker moves a cone at the Rancho Drive on-ramp to U.S. Highway 95, which is closed due to construction, in Las Vegas on Saturday, March 10, 2018. (Patrick Connolly/Las Vegas Review-Journal) @PConnPie 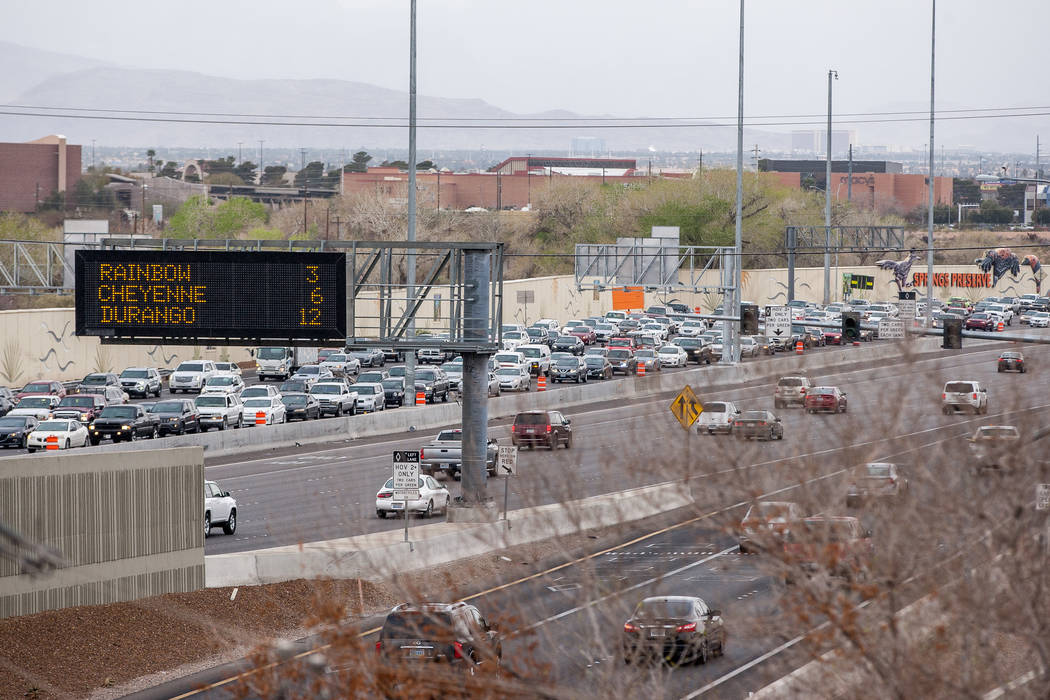 Traffic is backed up on U.S. Highway 95 due to construction in Las Vegas on Saturday, March 10, 2018. (Patrick Connolly/Las Vegas Review-Journal) @PConnPie 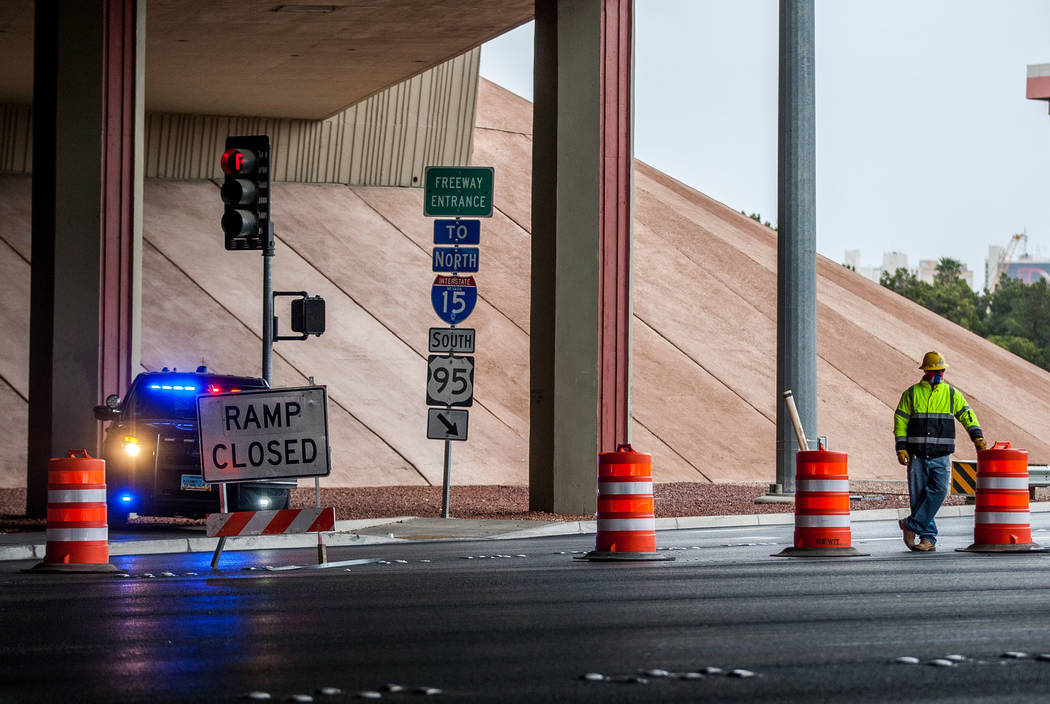 With the Main Event in full swing, perplexed commuters are still figuring out the best way to get around the maze of detours plaguing downtown Las Vegas.

Sadly, there’s no secret route we can take. And unlike previous closures around the Spaghetti Bowl interchange, the Nevada Department of Transportation isn’t offering any suggestions to bypass the construction consuming Interstate 15 and U.S. Highway 95.

Even NDOT Director Rudy Malfabon is having a tough time.

“It took a lot longer to get here this morning,” Malfabon said Thursday, drawing laughs during the Regional Transportation Commission of Southern Nevada’s board meeting.

It’s a phrase many of us have uttered since last week, and will continue to say as work progresses on Nevada’s largest infrastructure project.

Indeed, some motorists are opting to take surface streets like Las Vegas Boulevard, Decatur Boulevard and Maryland Parkway to avoid the construction zone. Other brave souls are putting up with the stop-and-go slog through a significantly slimmer I-15.

“People are just learning how to improve their commutes,” Malfabon said. “I saw the news stories on the first day of the Main Event, and it definitely had some major impacts and delays for folks as they get better informed and really use the tools available to them.”

NDOT officials hope to alleviate some of the commuter confusion by flashing warning messages on a set of new Active Traffic Management signs along U.S. 95.

Drivers were also advised to use the Waze smartphone app and check for messages on the agency’s social media networks at Facebook, Twitter and LinkedIn. A hotline is also available in English and Spanish at 702-293-6366.

Even though the Main Event closes at the end of this year, construction will continue through July 2019 on Project Neon, the $1 billion effort to widen I-15 between Sahara Avenue and the Spaghetti Bowl interchange.

Clark County Commissioner Larry Brown, who serves as chairman of the RTC board, said he’s finding the progress for Project Neon to be “remarkable.”

“It is chaos,” Brown said. “But those who use it everyday, I think, have gained an appreciation of the magnitude of the project.”

Eleanor from Henderson said the road stripes are pretty faded at Horizon Drive and Horizon Ridge Parkway — almost to the point where she couldn’t find the limit line to stop at a red light.

Henderson city spokeswoman Kathleen Richards said the Public Works Department will check out the intersection and make improvements if necessary.

In the meantime, drivers who are unable to see pavement markings must follow a state law that requires them to stop before entering an intersection, Richards said.

“Other visual cues such as curbs, medians and pavement markings for cross traffic should assist with this decision,” Richards said. “Drivers should also ensure that the traffic signal is still visible when stopped.”

Joe is a part-time resident of North Las Vegas who frequently drives on Washburn Road, and wanted to know whether it could be widened around Fifth Avenue. For now, Washburn narrows from two lanes to one lane.

“It will be the private developer’s responsibility to do those street improvements when they develop that land,” Goldberg said.

In the meantime, Goldberg said the city Public Works Department will check on the road’s maintenance.

Rick from Las Vegas said the pavement is pretty rough along Grand Teton Drive, between Fort Apache and Oso Blanca roads in the northwest valley.

Las Vegas city spokeswoman Margaret Kurtz said city maintenance crews completed about 200 feet of shoulder repairs on the north side of Grand Teton in January, and increased the road’s width by four feet.

“There is a section of asphalt that has a slight washboard effect due to the volume of water coming down Grand Teton, but it is in good condition,” Kurtz said, adding that the recent work is expected to last until an overpass is built.