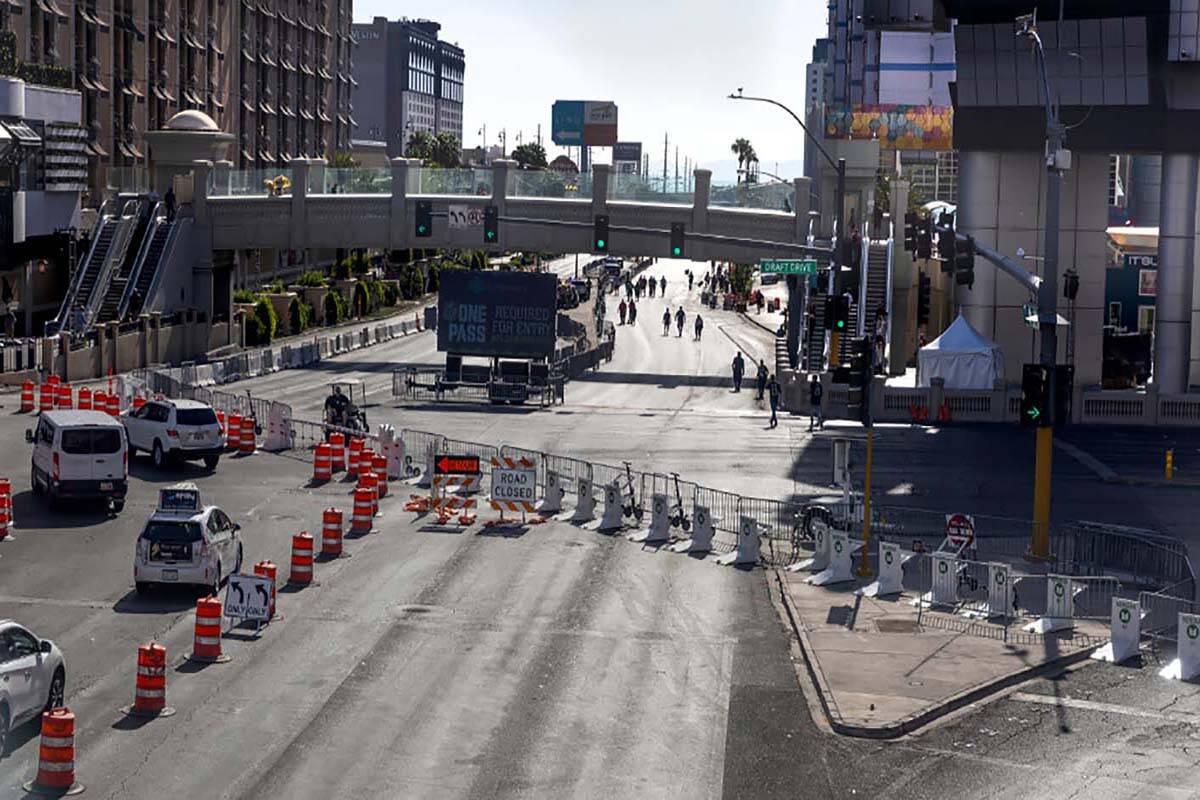 Shutting down a portion of Las Vegas Boulevard and Flamingo Road, as officials did for the NFL draft, is no easy task.

Crews shut down the Strip between Bellagio Drive and Flamingo, and Flamingo from Las Vegas Boulevard to Koval Lane late Wednesday night and kept them closed through Saturday night to accommodate the hundreds of thousands of fans that flocked to the NFL draft.

The process of shutting down a major throughput usually involves concrete barriers that take a lot of effort and equipment to move into place. But now an American perimeter security company says it has a better solution.

Meridian Rapid Defense Barrier Solutions deployed over 150 of its Archer 1200 mobile barriers to create a “ring of safety” protecting the NFL draft experience and theater behind the Linq and the red carpet stage built over the Fountains of Bellagio.

The key difference: The company’s barriers don’t require heavy equipment to move around, thus making them more flexible than their concrete counterparts.

Robert Penfold, a company spokesman, noted there have been several recent tragedies where cars have been driven into crowds or parades, severely injuring and killing people. That’s made event organizers work harder to keep pedestrians safe.

Meridian’s barriers have been used before at other events with large crowds, such as the inauguration of President Joe Biden, the Rose Parade in Pasadena and other sporting events, according to Peter Whitford, Meridian’s CEO. The barriers were also used earlier this year during the Pro Bowl in Las Vegas.

Some restaurants also have deployed them to protect customers dining outside.

“We ensure people and communities are safer because of the protection we provide around each of these major events,” Whitford said. “The thing that is mostly unique about them is our product’s size.”

The barriers used for the draft are three feet high, four feet long and two feet wide. They are made of American steel and are easily movable thanks to wheels on the backside. They also allow for pedestrian and emergency vehicle access without moving a large concrete barrier.

“To be there for the draft we know we can open up the street right around the perimeter in 40 minutes and then close them down in exactly the same amount of time, without the use of heavy equipment,” Whitford said.

Each barrier weighs 700 pounds and is SAFETY ACT approved, meaning it has been OK’d for use by the Department of Homeland Security. The company’s literature says the barriers also offer “full ballistic protection for any armor piercing 50 caliber rounds.”

“The way that we deploy them they can stop a vehicle going 30 mph within seven feet when they’re joined together, 15 feet when they’re spread out and the further we spread them apart it might be 20 feet or more,” Whitford said. “When people hit them, they’re non-lethal, so you’re not going to kill the driver. At the same time after you hit them, they’re completely reusable.”