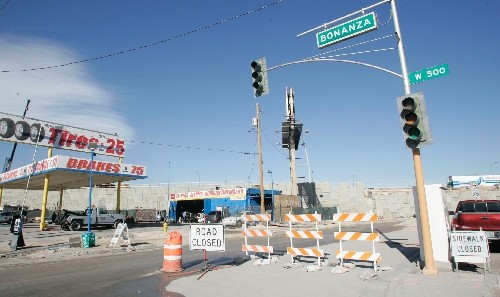 The reasons behind the closure of F Street between downtown and West Las Vegas might forever remain a mystery.

Transportation officials claim the road was shut down to prevent “cut through” traffic from tearing through neighborhoods. Skeptics believe Las Vegas city leaders wanted to protect new developments such as Irwin Molasky’s newish building on City Parkway and the Smith Center for the Performing Arts from the historically black community of West Las Vegas.

When barriers were placed on F Street in 2008, longtime residents of the neighborhood called city officials and Nevada Department of Transportation engineers racist. In fact, attorney Matthew Callister, who filed a lawsuit on behalf of community, called the closure “the worst incident of race-based segregation” in the city’s history.

And really, who could question the residents’ outrage?

History has shown that this community is constantly battling isolation. In the 1960s, the city closed other outlets toward downtown in D, F and H streets. Residents referred to the road closures as the “iron curtain” because they were so separated from the rest of the Las Vegas Valley. The streets eventually were reopened.

When Interstate 15 was built in the late 1960s, no offramps were built leading into the community. Dissed, again.

Even though D Street about 100 feet away from F Street still goes through to downtown, the most recent closure triggered enough fury to prompt a lawsuit that claimed residents weren’t properly notified of the plans.

Two years have passed and tension between the government and community leaders subsided after the Legislature directed the state transportation division to reopen F Street.

A far smoother road is ahead, literally and figuratively. Call it a $17 million lesson, because that will be the cost to tunnel beneath the recently widened Interstate 15 to create a new ingress and egress into West Las Vegas.

Rudy Malfabon, a deputy director at the Nevada Department of Transportation, said the issue taught his division that community outreach is vital.

“We were thinking purely from an engineering perspective,” he said. “When we look at a project, we look at how do we move traffic where it wants to go more effectively. We did not even realize those (cultural) issues were there until we were under construction.

“From our perspective, we thought, ‘Oh, a cul-de-sac on a residential street, people will be happy that their kids can go out in the street and play without worrying about a concrete truck barreling down the road.’ ”

Basically, nobody realized that redesigning roads could be construed as racism.

Officials at the Department of Transportation have since changed the way they communicate with businesses and residents affected by road projects. For example, officials have hosted a handful of meetings in Boulder City to inform the community of the progress on U.S. Highway 93, which will be widened to eliminate backups that have occurred since the Hoover Dam bypass bridge opened in October.

The Las Vegas City Council held public hearings on the proposed F Street closure, newspaper stories were written and residents within 400 feet of the project were notified. But that clearly wasn’t enough, Malfabon said. Not everybody logs onto a computer to check a council agenda or reads the newspaper.

“Sometimes people are so busy, you have to go to them on their ground,” he said. “You have to be more specific as to how it will affect residents and business owners.

“We also learned there are different points of contact in each neighborhood. On the west side, there are churches that have more direct and intimate contact with residents.”

Another lesson learned from F Street is that it probably isn’t a good idea to send engineers to deliver presentations. A community outreach specialist won’t speak engineer-ese.

The Department of Transportation has since reached out to the folks in West Las Vegas and worked with them on a new design for F Street. The sound walls along the new roadway will reflect the community’s culture and history. In June, representatives will present residents with the final rendering of the walls, which will include historical elements and musical notes.

“The walls will have art on them, and we wanted to let the community decide what was important to them,” said Michelle Booth, spokeswoman for the agency. “There are a lot of people who have been there for years. Their parents lived there. They are rehashing memories and our designers are going to build something off of that. We want it to represent and celebrate their history.”

Malfabon said crews are expected to break ground on the project early next year, and it is expected to take at least two years to finish.

We may never know why, as Callister puts it, the city “stealthily” closed F Street, but it is paying for that decision. Literally — between the design phase and construction, the cost is expected to run about $20 million.

If you have a question, tip or tirade, call Adrienne Packer at 702-387-2904, or send an e-mail to roadwarrior@reviewjournal
.com. Please include your phone number.