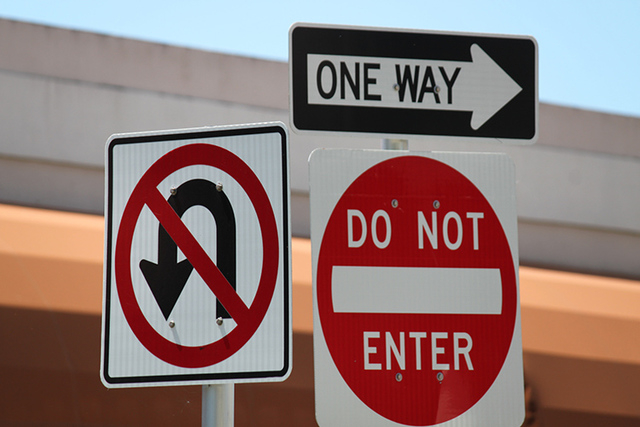 To U-turn or not to U-turn. That is the question.

Warrior reader Dan’s co-pilot has a little dispute with his interpretation of some important road signs:

“Having a backseat (or passenger-seat) driver that you are married to is no fun when you have a differing opinion on the meaning of signs. Can you help clarify a point?

“Nevada laws permit a U-turn when safe in most cases, except when they are specifically prohibited. The statute, in part, reads, ‘A U-turn may be made on any road where the turn can be made with safety, except as prohibited by this section … ’

“The only signage at Sierra Vista is a ‘Left Turn Only’ sign (right next to a ‘Do Not Enter’ sign), presumably intended to warn drivers not to go straight from the left-turn lane, which would put them going the wrong direction into the northbound turn lane.

“I believe a U-turn is permitted here. Of the six possible turns in this half-mile stretch, five are specifically prohibited; this is not. Is it safe to do so? The only time you could turn is with the green arrow, so oncoming traffic will always be stopped. There is plenty of space, three lanes plus a median divider, so even cars with large turning radii can make it.

“However, my passenger seat driver says ‘Left turn only means you can only turn left. Not U-turn.’

“What says the Road Warrior?”

Whoa, Dan. Talk about pressure. I feel like your pilot and co-pilot relationship could be at stake based on the answer to this query. Suddenly, I’m Judge Judy.

For those unfamiliar, this is that portion of street where the Las Vegas Monorail pillars take over the center of the Paradise, making any turn a little dicey.

No worries, Dan. I consulted with a true expert, Nevada Highway Patrolman Jason Buratczuk, on your query.

“Your writer is right, a U-turn can be done anywhere it is safe to do so,” Buratczuk said. “The only time it says in the law you can’t make a U-turn is when there is a sign posted advising no U-turn.

“Driving on or across medians and such is illegal as well, but I don’t want to open that can of worms. So at the intersection in question, if there is no sign specifically stating no U-turn, then a U-turn is permissible.”

What’s up with Costco?

Many of my Seven Hills-Sun City Anthem-Sun City Highlands friends can’t wait for that new Costco store to open and wonder what new traffic patterns are in store. Warrior reader Georgietta wants to know:

“Several months ago, the announcement was made that a new Costco would be built near Maryland and St. Rose parkways.

“I understand that one of the roadblocks was getting permission to install gas tanks underground and I’m sure an environmental impact study had to be done. But, so far I see only a few mounds of dirt near the site. What is the status?

“Also, will Maryland Parkway finally be connected south? Will it connect to Volunteer Boulevard? When will that happen? The Parkway road was started but then blocked off and never finished even though there is a stop light there now. This would really enhance the traffic patterns to and from the new Costco building.”

The city of Henderson’s Keith Paul has some answers:

“The planning process was completed with the approval at the March 10 Planning Commission meeting,” Paul said. “The next step would be building permits. At this time, there have been no applications for building permits for the project; however, we expect the application in the near future.

“There are no plans at this time for Maryland Parkway to be built out south to Volunteer Boulevard. It is in the city’s long-term plans to have Maryland Parkway continue; however, there is no timetable for such a project to be undertaken. Sunridge Heights Parkway will connect to the west with Executive Airport Drive, running south of the Costco development as another way into the retail center.”

It’s still a pretty good idea to be on the watch for confused looks and motorists unaware of where they need to park near the new T-Mobile Arena with a trio of big events this week.

Tuesday night, the Harlem Globetrotters bring their magic at 7 p.m. Then, Friday and Saturday night, country superstar George Strait plays the first of several concerts at the venue.

The Strip also will be extra packed this week for the four-day National Association of Broadcasters convention that officially kicks off Monday. An estimated 103,000 conventioneers will be in town for that event at the Las Vegas Convention Center.