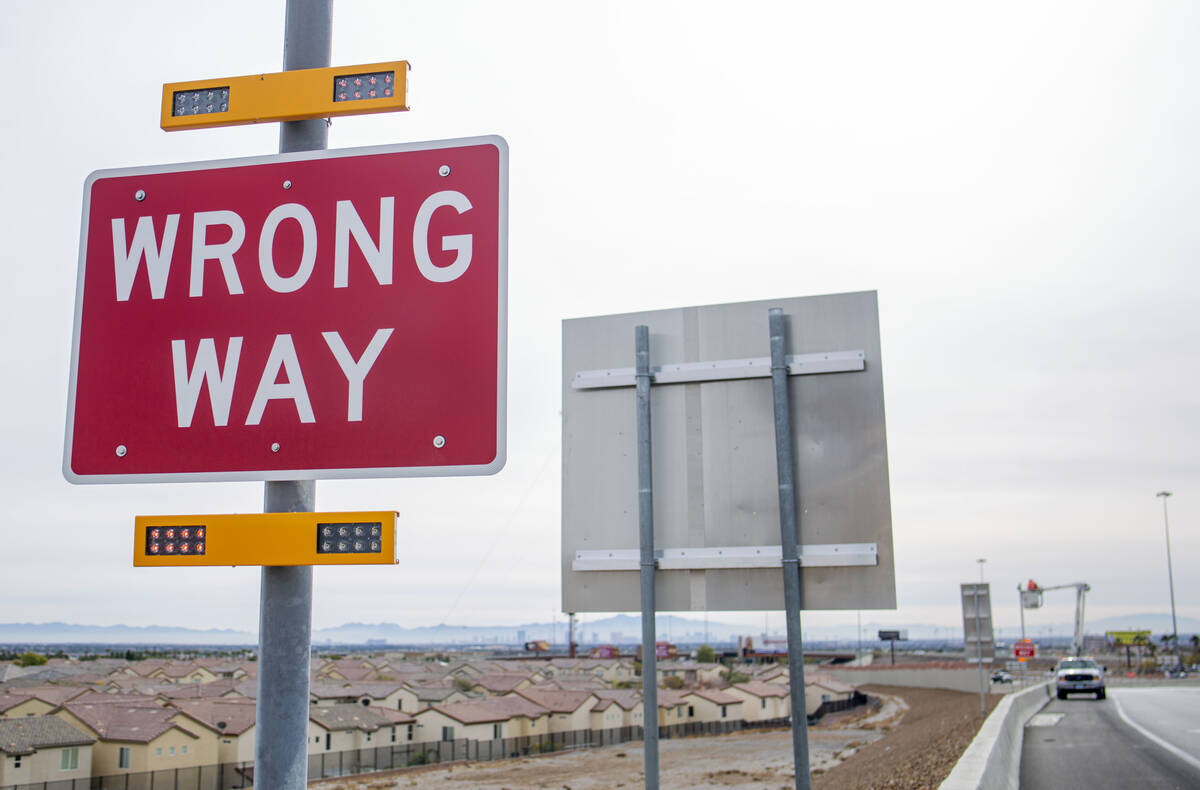 The Nevada Department of Transportation Board of Directors earlier this month approved a $1.2 million contract to install the detection systems at three Las Vegas Valley locations and upgrade a fourth. Carson City also will see a wrong-way detection system installed.

The systems will utilize radar and cameras to detect wrong-way drivers and red flashing beacons to alert them they’re headed the wrong direction.

“With the new wrong-way driver detection systems, Nevada will be on the leading edge of combating these dangerous and severe crashes,” Gov. Steve Sisolak tweeted. “The detection systems will be installed on select freeway ramps on the I-15 and U.S. 95 in Vegas and I-580 in Carson City.”

The freeway ramps targeted in the Las Vegas area are:

“Those locations were chosen because they already have the baseline infrastructure necessary to support the systems,” said NDOT spokesman Justin Hopkins.

The work will also include upgrading the lone wrong-way detection system in Southern Nevada at U.S. 95 at Durango Drive in the northwest valley.

The video detection system there will be updated to improve its ability to sense wrong-way driver movements and enhancements to the flashing lights.

Work to install the systems will begin in early 2023, but the order in which they will be added has yet to be determined, Hopkins said.

Wrong-way driver crashes lead to around 500 deaths annually nationwide, according to AAA. In Nevada, there are on average five to six deaths caused by wrong-way drivers each year.

“That represents approximately two percent of our annual traffic fatalities,” Hopkins said. “While the percentage of total crashes isn’t that large as other focus areas, wrong-way crashes tend to be more severe. By their nature, they often involve high-speed vehicles crashing head-on or opposite-direction sideswipes.”

In January, four people died after a wrong-way crash in the southbound lanes of I-15 near Jean, the Nevada Highway Patrol said. At least six vehicles were involved in the crash.

And in August 2021, two people were killed, including a child, in a wrong-way crash on I-15 about 12 miles south of Moapa.

In 2016, NDOT obtained approval through the Federal Highway Administration to test red rectangular flashing beacons at select areas as a way to warn wrong-way drivers.

That number grew to 37 locations after a 2020 approval to expand their use, with just the one at U.S. 95 and Durango located in Southern Nevada.

The beacons incorporate radar and closed-circuit cameras to automatically detect vehicles entering a road in the wrong direction, which in turn activates two sets of red flashing signs on the ramp.

“The first set of signs stands 4 feet high instead of the standard 7-foot sign height to best reach the lower eye level of potentially impaired or distracted drivers,” Hopkins noted.

“Our wrong-way driving countermeasures study looked at research and wrong-way mitigations in other states, as well as conducted a crash analysis of WWD crashes here in Nevada,” Hopkins said. “We looked at crash data, land use data, interchange data and citation data. This helped us outline a countermeasure implementation plan identifying interchange off-ramps throughout the state that are candidates for wrong-way driver detection systems.”

“That means that 78 percent of the potential wrong-way drivers corrected, pulled over on the shoulder and exited the roadway correctly, backed up and reversed their direction, stopped their vehicle prior to entering the off-ramp, or turned and traveled in the proper direction,” Hopkins said.