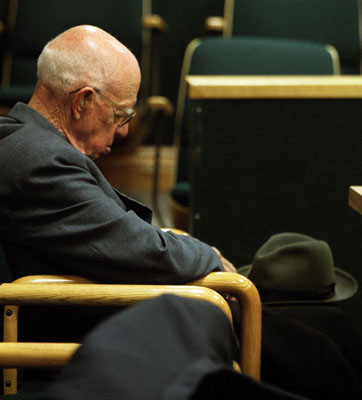 After his death last year, Dr. Quincy Fortier confirmed the fraud he never had to admit during a long, decorated career in Las Vegas.

The obstetrician, who opened Las Vegas’ first women’s hospital and was named 1991 Doctor of the Year, was accused years later in lawsuits of fraudulently using his own sperm to artificially inseminate two patients.

Each claimed the doctor told her he was using her husband’s sperm, and each gave birth to two children about 20 years before they learned the truth about their children’s paternity.

In each case, confidential, out-of-court settlements were reached, in 2001 and 2006 respectively, after court-ordered DNA tests showed Fortier was the children’s biological father. But the doctor was never found guilty of any offenses, wasn’t forced to admit wrongdoing and did not have his medical license revoked.

However, in his will, filed in District Court in February after his death in November, the doctor not only acknowledged he is the biological father of all four children, but also left a haunting footnote for other women who had trusted him decades earlier.

The document states additional, unnamed offspring of the physician may be identified after his death, leaving open the possibility that other women unknowingly gave birth to Fortier’s children after he performed artificial insemination on them.

Former patients and their children, however, may find it difficult to get questions answered about the doctor.

Public records of Fortier’s fraud either don’t exist or have been hidden from public view, and plaintiffs in the lawsuits against him have been silenced by confidential settlements that prohibit them from discussing their case.

The state Board of Medical Examiners, which licenses physicians in Nevada, last year launched an investigation into the allegations against Fortier, but dropped its probe following his death.

As a result, Fortier never lost his license or received any discipline in response to the allegations that prompted the investigation, said Lyn Beggs, deputy general counsel for the Board of Medical Examiners.

"He died and we dropped the case when he died," Beggs said. "If a doctor is dead, there is no public benefit in digging this stuff up. … Our role is not to dig up stuff from 35 years ago, but to protect the public here and now."

Normally, details of the court cases would have provided details about Fortier’s conduct to any member of the public who cared to inquire. But about two weeks after the first lawsuit against Fortier was settled out of court in August 2001, District Court Judge Lee Gates sealed the case from public view.

As a result, the allegations lodged by patient Mary Craddock, plus motions, witness lists, depositions, two days of courtroom testimony, the judge’s rulings, the doctor’s DNA samples and other information on that case, are all hidden from other patients Fortier treated over decades in Nevada.

Gates refused to comment on the Craddock case or his reasons for sealing it. Attorney John Wawerna, who represented Fortier in that case, and attorney John Lee, whose firm represented Craddock, couldn’t be reached for comment.

Las Vegas lawyer Kathy England, who is on the state Supreme Court’s Commission on Preservation, Access and Sealing of Court Records, said she wasn’t familiar with the Fortier case but said it raises questions about the privacy rights of litigants.

Fortier and other defendants repeatedly accused of wrongdoing shouldn’t be permitted to keep court records private, but Fortier’s patients and their children are entitled to some degree of privacy because they are victims, England said.

"The public’s right to know about injurious activities transcends the bad actors’ claim to privacy. When you have committed an injurious act, especially one that is not an isolated incident, there may be a public interest in having that repetitive conduct disclosed publicly in a lawsuit. … I don’t think someone who artificially inseminates people fraudulently has a legitimate claim to privacy."

Las Vegas attorney Richard Myers, who also was appointed to the state Supreme Court commission, said the case should not have been sealed.

"That sounds like something the public would have an interest in, and it shouldn’t be sealed," Myers said. "If there are other patients that he artificially inseminated … (information about the case) is something that they would want to know and have a legitimate right to know."

While the Craddock case was sealed, a subsequent lawsuit filed in 2003 against Fortier by Patrick and Carolee Fullmer was not sealed. It is hidden to some extent, however.

Using the District Court’s online computer database, users can find out about lawsuits, the litigants, attorneys and judges in each case, the dates of hearings and the minutes of decisions in each case and other information. Or, interested parties can look at entire files for each case at the courthouse records office.

When just the doctor’s name is entered, the Fullmer case and other cases against the doctor do not appear on the computer screen. To locate the case, one must know the names of the other litigants in each case, or must remember that Fortier was a physician and enter his name as "Fortier MD, Quincy."

The Craddock case is just one of dozens of lawsuits sealed by District Court judges between 1990 and 2006, according to records of sealed cases requested by the Review-Journal.

Judges claim to have inherent authority to seal lawsuits, but critics have said keeping lawsuits from public view is generally prohibited by Nevada law.

No information is available to the public about sealed lawsuits, but the Review-Journal was provided with the identities of litigants in some of the cases. They include people and groups that are wealthy or wield influence in politics, business, medicine and the courts. They include doctors, lawyers, politicians, casinos, judges, public utilities and public agencies, such as the Clark County School District and Las Vegas police.

Like other litigants in sealed cases, Fortier had influential friends or family members.

According to Fortier’s will, his daughter is married to powerful Carson City lobbyist Harvey Whittemore, who is developing the 43,000-acre Coyote Springs master-planned community 50 miles north of Las Vegas. The massive project has been approved for construction of up to 159,000 homes.

Fortier, who received his Nevada medical license at the end of World War II, was named Doctor of the Year in 1991 by the Clark County Medical Society, and he helped open the first women’s hospital in Las Vegas in the 1960s, according to his obituary. The Massachusetts native and former Air Force physician also helped open Faith Lutheran School in Las Vegas and reached the rank of commander with the Air Force Reserve unit at Nellis Air Force Base, the obituary said.

Although Gates sealed the Craddock case for reasons left unexplained, the handful of Review-Journal articles written about the Craddock case and other lawsuits filed against Fortier shed light on that sealed case.

In her lawsuit filed in 1996, Craddock accused Fortier of defrauding her in the 1970s by twice using his own sperm to artificially inseminate her. The Craddocks’ daughter was born in 1975, and their son was born two years later. Craddock’s grown daughter, Heather Craddock, in 1994 told her mother an elderly Fortier had phoned and divulged to her that he was her biological father.

Records of an affidavit, and records of questions posed to the doctor before the court-ordered DNA tests, state that the doctor denied that he is the biological father of the Craddock children. However, the records also state that Fortier recalled that Craddock gave her verbal consent for each procedure after the doctor explained that the fluid to be used contained the sperm of her husband and others.

Three days after the trial started in August 2001, and two days after Mary Craddock’s tearful testimony, the trial abruptly ended when litigants announced they had settled the case out of court, according to Review-Journal articles at the time.

Heather Craddock filed a lawsuit against Fortier in 2000, and she also received a confidential settlement before that case went to trial. The daughter’s case was not sealed by a judge, according to court records.

After reading newspaper accounts of the Craddock case in 2001, Patrick Fullmer underwent DNA tests that showed he wasn’t the biological father of his two children conceived through artificial insemination of his wife by Fortier. The children were born in 1980 and 1985.

But documents filed in the case assert that Patrick Fullmer’s business suffered, the couple argued about whether to undergo DNA testing, and they received counseling from a minister at their church after learning about the Craddock case. The situation tore the family apart, and Patrick Fullmer filed for divorce in October 2003, the documents assert.

They did conduct DNA testing, but their lawsuit says, "Upon learning the truth, they suffered depression, mental anguish, emotional distress and anxiety which affected their marital relationship. Carolee continued to emotionally struggle with the impact of the DNA results. She suffered severe depression and would not get out of bed for days."

In his defense, court records say, Fortier asserted at the time of the lawsuit that he had received oral consent from Patrick and Carolee Fullmer to use semen that was not exclusively Patrick’s, but would come from a "donor mix." However, Fortier never produced written consent, and claimed at the time he was unable to find any medical records for Carolee Fullmer’s treatment in the early 1980s.

After the Fullmer case was settled out of court in 2006, the state Board of Medical Examiners launched its investigation of Fortier in response to a 2003 state law that wasn’t enacted until after the Craddock case had concluded. The law requires doctors to notify the board when a malpractice lawsuit is filed against them, and it requires the courts to notify the board after a physician loses or settles a malpractice case, Beggs said.

Although the board dropped the case after Fortier died, the agency’s Investigative Committee issued a complaint in the case after it determined there is "reasonable basis to believe" Fortier violated state laws.

The investigation centered on violations of laws that prohibit doctors from engaging in conduct "intended to deceive" a patient and that "violates the trust of a patient and exploits the relationship between the physician and patient for financial or other personal gain," according to the complaint.

Patients whose treatment is the subject of a complaint are not identified in the document. Instead, they are referred to as patients A and B.

A state law enacted in 1979 required that a physician file a consent form, signed by both parents, in which they would have agreed to use semen from other donors during an artificial insemination procedure.

The board complaint states that Fortier did not file such a form.

And the complaint goes on to state, "Patients A and B did not give their consent nor were they notified that anyone else’s seminal fluid was utilized during the artificial insemination procedures." 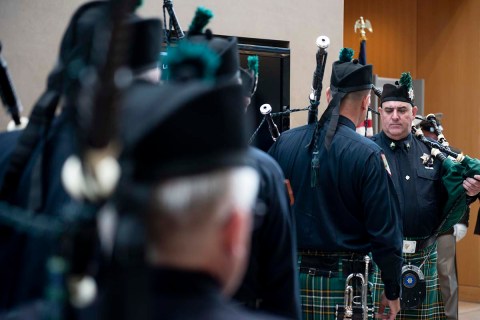 ‘We will never forget their service’: Officers killed in the line of duty honored
By David Wilson / RJ