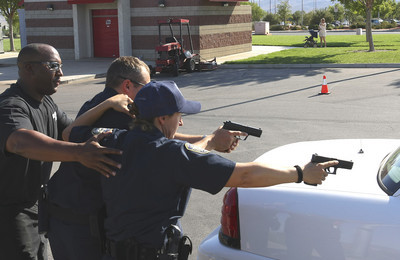 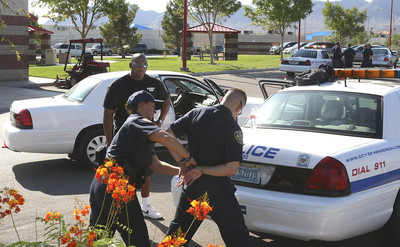 For nearly four weeks a year, Aaron Liu gets to see the type of thing he would normally only see in movies. Across the street from his school, police officers draw their weapons, shout aggressively and make arrests.

“They are not scaring me, they are amusing me,” said the third-grader at J. Marlan Walker International School in Henderson, at Mission and College drives.

He knows that the uniformed police recruits he sees at Mission Hills Park, just like police in the movies, are only pretending.

Liu thinks the action is “cool.”

Some neighborhood parents don’t, however, and say police shouldn’t be training in the park across from the school.

“To my children it was pretty scary,” said Henderson resident Michele Spiger, who has two daughters, ages 7 and 5, enrolled at J. Marlan Walker. “Recruits are out there yelling, ‘Get out of the car now. Get down on the ground. Put your hands on your head.’

Three times a year, recruits from the Southern Desert Regional Police Academy embark on nine-day training sessions at Mission Hills. That makes up a portion of their training at the College of Southern Nevada’s Henderson campus, less than a mile away. The academy opened four years ago.

Henderson police, North Las Vegas police and police agencies from CSN, the Clark County School District and the University of Nevada, Las Vegas, among others, draw from the recruiting pool.

Mission Hills is often used for “practicals,” one of the last steps in a police recruit’s training, said Mark Hoyt, spokesman for North Las Vegas police.

Recruits practice traffic stops, responding to robberies and field interviews, among other things, he said.

The park is convenient for recruits and their trainers because it is near the academy and has the space for training, Henderson police spokesman Keith Paul said.

Recruits also jog around nearby neighborhoods as part of fitness training, he said.

Recruits also can be seen training in the parking lots of Foothill High School and the College of Southern Nevada, and O’Callaghan Park, Paul said. O’Callaghan park is next to Galloway Elementary School on Skyline Road.

There are 18 different off-site locations used by the academy, Hoyt said.

“It’s very important,” Hoyt said of the drills. “They (recruits) are being evaluated on everything they have learned in the past weeks and putting it to use in the field. If they can’t function through those scenarios, they might have a hard time on the street when they are a solo beat officer.”

Recruits use real weapons, which are unloaded, during drills, Hoyt said.

Knudson takes his 18-month-old son to his neighborhood parks four or five times a week.

Recently, Knudson saw recruits roughing up and swearing at a “suspect” during a mock arrest.

“You don’t let them watch that sort of thing on television. Why let them watch it in a park where they are supposed to be safe?” he said. “There has to be tons of places besides where kids play that police can train.”

Recruits are not supposed to curse, regardless of where they are training.

If recruits use foul language during a mock arrest they are counseled by instructors afterwards, Paul said.

Spiger would like to see the recruits train when kids are not around, such as during school hours when they are inside. The officers should make it more clear they are doing training exercises by notifying the public, she said

The police academy uses the park during swing shift hours, starting in the afternoon and working late into the evening so that recruits can train for both day and night scenarios, Hoyt said.

The simulated police events are obvious training situations, Paul said. Sometimes, “up to a dozen folks in uniforms are watching” them. Other times, the instructors present are easily identifiable as teachers, he said.

Henderson resident David Miller frequents Mission Hills Park when his grandchildren are in town and sees a benefit to the drills.

“I think the training teaches kids to appreciate the police and what they do for us. They are here to protect us, not to scare us.”

Many parents who were at J. Marlan Walker to pick up their children had similar sentiments.

Too often crimes go unreported because a victim is afraid to tell police, said Henderson resident Opal Perry. The police presence at the park teaches kids that police are approachable, she said. Perry said she wishes the officers would interact with the students at the school more.

Sharron Carducci of Henderson admits she was a little scared the first time she saw the recruits doing the drills. But she said the training occurs so frequently she’s used to it now.

Her granddaughter, Amanda Carducci, 8, said the recruits don’t scare her, but her little brother, Kyle, sometimes feels uneasy when he sees them practicing. He thinks the police are there to arrest him, she said with a giggle.

Even though Las Vegas police have several training facilities throughout the valley, department recruits also often use the parks and streets around their main academy, the Jerry Keller Training Center at 9880 W. Cheyenne Ave, for practicals and physical fitness, said Las Vegas police spokesman Martin Wright.

Although the department occasionally get complaints from residents about the noise and flashing lights, the public training helps officers and recruits develop a relationship with community members, he said.

Paul said Henderson Police have responded to some complaints about the action at the park. Usually residents are pleased when they hear new officers are being trained, he said.

“Residents always want more police and these recruits will one day patrol our community,” he said.