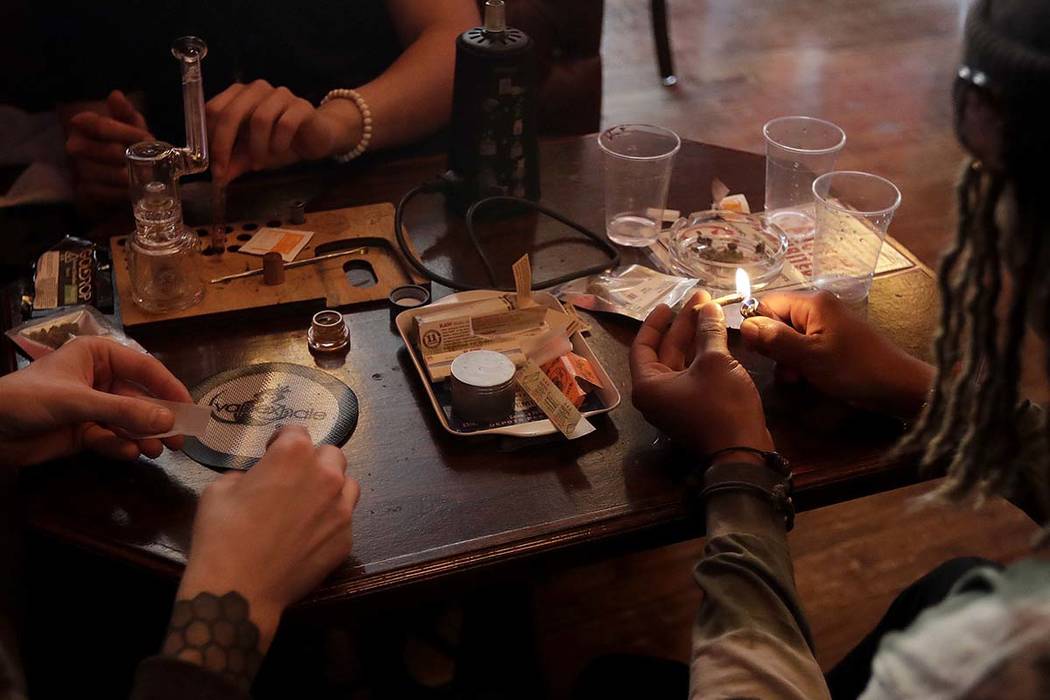 Patrons smoke marijuana while sitting in a booth in the smoking lounge at Barbary Coast Dispensary in San Francisco in 2018. (AP Photo/Jeff Chiu)

CARSON CITY — Just as one local government made its move to allow for marijuana consumption lounges, an amendment to a bill in the Legislature threatens to stall those efforts.

The Assembly Judiciary Committee approved the amendment to Assembly Bill 533 Friday morning. The bill would create the Cannabis Compliance Board, one of Gov. Steve Steve Sisolak’s key proposals this session.

In its original version, the bill would have given the new board the authority to hand out state licenses to operate consumption lounges. But the amendment approved in committee Friday excised that language from the bill and added a provision that would temporarily bar local governments from licensing such lounges.

That prohibition on local governments would expire on July 1, 2021, under the new amendment.

Assemblyman Steve Yeager, D-Las Vegas, chairman of the committee, said the changes came at the request of Sisolak’s office.

“I just think we’ve got to get it right. And I don’t feel comfortable that we were going to get that balance right in the next 10 days,” he said. “So while I would like to see them open as quick as possible, I also don’t want to have a situation where they’re opening and they’re not successful and they have ail kinds of associated problems.”

The amendment also calls for the cannabis board to conduct a two-year study on consumption lounges.

“The governor believes that it’s better to address this issue the right way than the quick way, which is why he’s establishing the Cannabis Compliance Board to address some of the issues that have arisen as a result of rushed decisions made in the past and to establish a comprehensive, statewide regulatory structure that will make Nevada’s cannabis industry the gold standard in the nation,” Sisolak spokeswoman Helen Kalla said in a statement. “The governor believes that consumption lounges have a place in the future of Nevada’s rapidly-growing cannabis industry, and looks forward to the work that the CCB will do in the interim to ensure that this part of the industry is well-positioned to add to the job creation and economic growth our cannabis industry has brought to the state.”

If AB533 were to pass in its amended form, it’s unclear how it would affect the ordinance that the city of Las Vegas passed this month that allows for consumption lounges.

City spokesman Jace Radke said in an email that “the city is still reviewing this amendment to determine how it impacts the city ordinance.”

Las Vegas’s decision came two years after a legal opinion issued by the Legislative Counsel Bureau said there was no state law preventing local governments from licensing lounges themselves.

The city’s ordinance on lounges drew support from the likes of the Metropolitan Police Department, but the Nevada Resort Association, the gaming industry’s primary state lobbying organization, opposed the concept.

On AB533, the resort association had proposed an amendment that would have required consumption lounges to be at least 1,500 feet from any licensed gaming property, a larger separation than for schools or community facilities.

“For our industry, it’s a compatibility issue. As long as cannabis remains illegal on the federal level, Nevada’s gaming regulators have directed gaming license holders to steer clear of the cannabis business,” Virginia Valentine, president of the resorts association, said in an email. “We’re encouraged to see the governor and legislative leadership provide the time needed to create an effective regulatory structure that ensures the gaming industry and the cannabis industry continue to operate separately and successfully.”