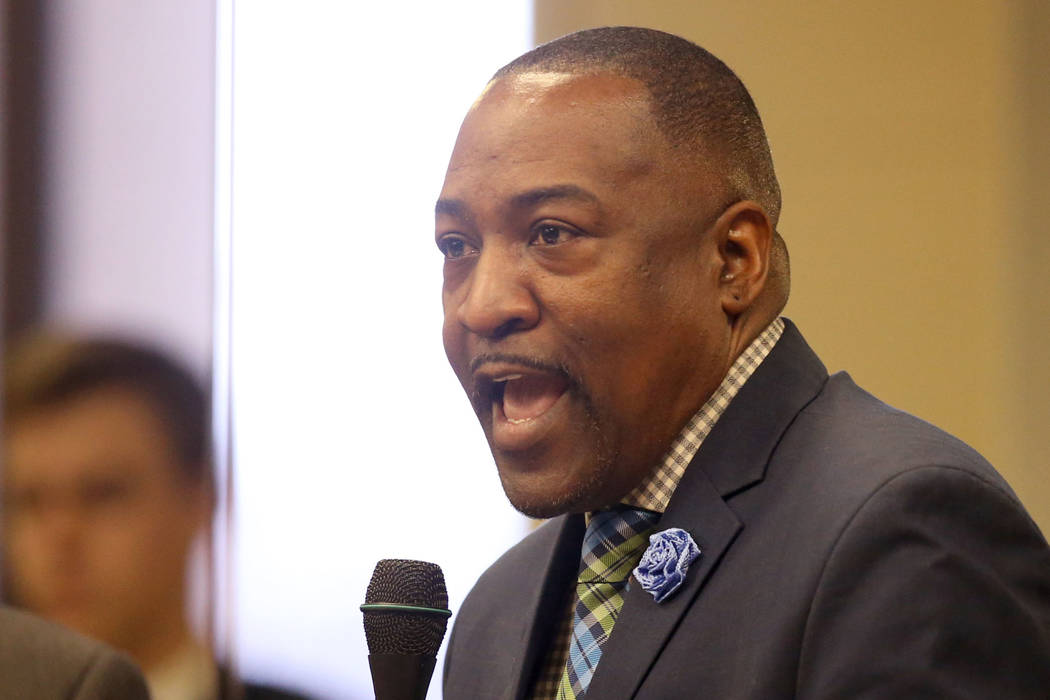 Democrats in Nevada are again pushing to join an interstate compact to let the national popular vote determine the winner of the presidency.

It’s the third time the proposal has gone before lawmakers in Nevada in the last decade, with the previous efforts falling short of making it to the governor’s desk.

But the proposal has gained traction recently in other states, including Colorado, where Gov. Jared Polis is set to sign the measure after it was approved by state lawmakers. And with Democrats in Nevada controlling both houses of the Legislature and the governor’s mansion for the first time in decades, Nevada could follow suit.

Under Assembly Bill 186, Nevada’s six presidential electors would be required to cast their votes for whichever candidate wins the national popular vote regardless of how residents in the state voted, effectively negating the Electoral College system that has been in place since the nation’s early days.

That would prevent cases similar to what occurred in the 2016 election, in which Hillary Clinton won the popular vote but lost the race to Donald Trump after he won handily in the Electoral College.

“It’s important for all of our generations to know that their vote counts,” the effort’s sponsor, Assemblyman Tyrone Thompson, D-North Las Vegas, said. Ten other Democrats are signed on as sponsors or co-sponsors of the bill.

But opponents of the measure say it would disenfranchise states such as Nevada because candidates would instead focus their efforts on the states and areas with the highest populations, such as California, New York, Florida and Texas to get the most bang for their buck.

And even if Nevada were to pass the bill and join the movement, the effort has a long way to go before it could actually take effect.

The bill would only take effect if enough states join the compact. For that to happen, states representing at least 270 total electoral votes — the threshold needed to win the presidency in the Electoral College system — would need to be signed on to the compact at the same time.

Eleven states plus the District of Columbia — representing a total of 172 electoral votes — have passed legislation to join the compact. With Colorado expected to join in the coming weeks, its nine votes bring the compact’s total to 181, meaning it is still 89 votes shy of the threshold.

Along with Nevada, other states including Oregon, Delaware, Maine and New Mexico are considering legislation this year to join the compact. If all five states were to join, it would bring the collective’s electoral vote total to 206, or just 64 shy of the mark needed.

Republicans who questioned the idea raised concerns over the constitutionality of such legislation and argued that it effectively renders the Electoral College meaningless.

Kevin Powers, legal counsel for the state’s Legislative Counsel Bureau, said during last week’s hearing that nothing in the compact violates the Constitution, however.

And according to the federal government, nothing requires state electors to vote in line with the state’s results.

“There is no Constitutional provision or Federal law that requires Electors to vote according to the results of the popular vote in their states,” the U.S. Electoral College website says. 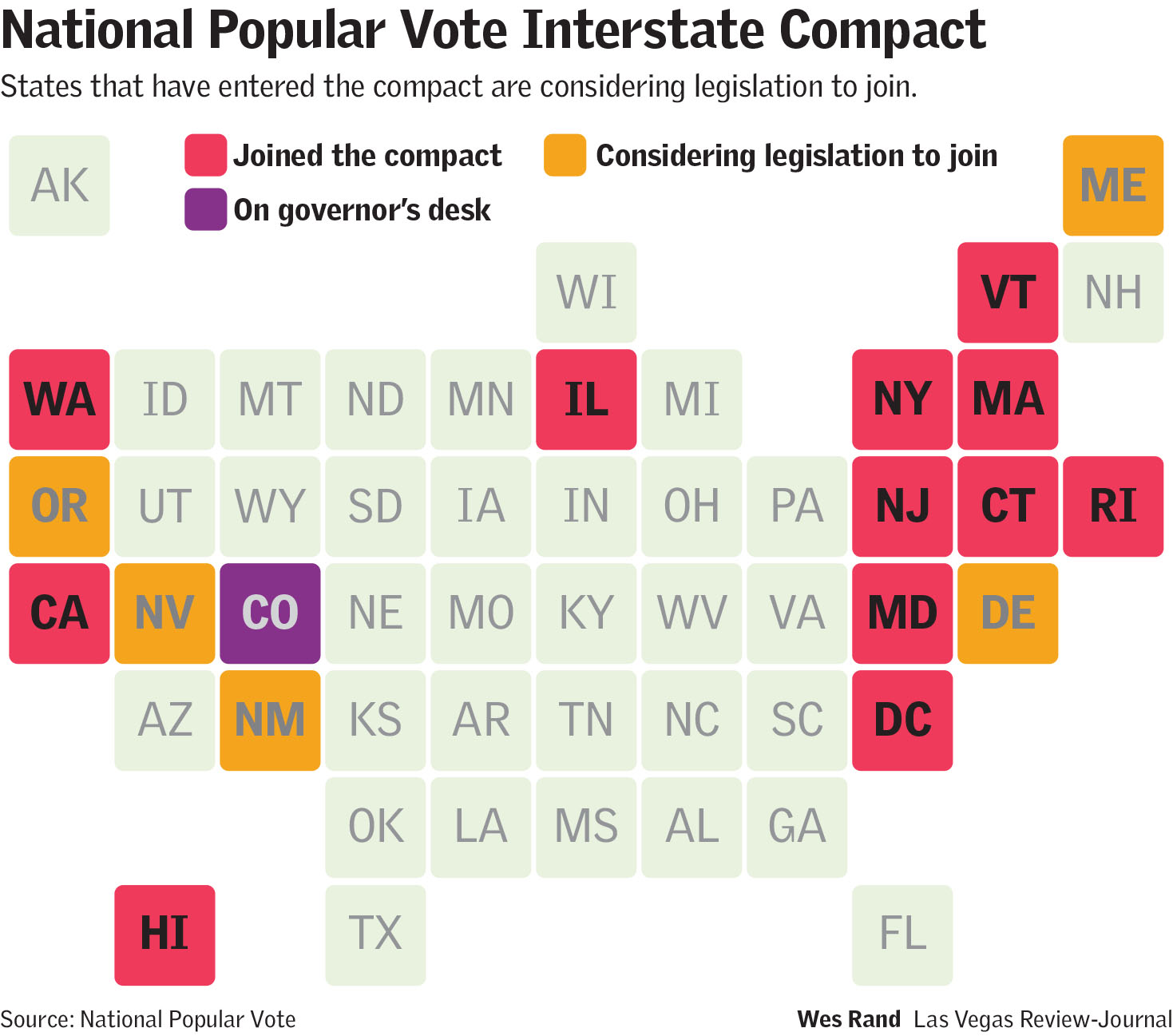 Reasons for the push

The U.S. Constitution also gives state legislatures the authority to decide how their electoral votes are allocated.

And that is why the group behind the effort believes it’s necessary.

National Popular Vote President Barry Fadem said that the problem with the more-than-200-year-old system is that most states lean strongly to one side or the other, which renders voters of the minority party almost meaningless in presidential elections.

And the candidates themselves spend very little time in those states, as well: 94 percent of the campaign stops made by Clinton and Trump in the 2016 election were in 12 battleground states, according to Fadem’s group.

Those factors lead to lower turnout in the non-battleground states and puts the power of the presidential elections into just a handful of states, Fadem said.

But opponents are worried that Nevada, which was one of the 12 battleground states in 2016, would lose the voice it has in the current system.

With just over 3 million residents, Nevada ranks 32nd in terms of state population in the U.S. There are 18 urban metropolitan areas with larger populations than the entire Silver State.

And given Nevada’s massive area — it is the seventh largest state in terms of geographic size — opponents question why candidates would even bother coming here in a national popular vote model.

“Campaigns will naturally concentrate their efforts on large states and areas because it is more efficient,” Jim DeGraffenreid, vice chairman of the Nevada Republican Party, said during the bill’s hearing last week. “A candidate can reach a population much larger than the entire state of Nevada in any of America’s largest cities, and do so more easily.”

DeGraffenreid, who testified on behalf of the party against the bill, said it would “neuter the Electoral College,” which he argued was designed to protect smaller states.

“To suggest that a state should disregard its own voters and instead follow the will of voters in some other state is the exact opposite of what the framers intended,” he said.

While the effort is billed by supporters as nonpartisan, there is a clear split between Republicans and Democrats on the issue.

When the Colorado Legislature passed the bill last month to enter the compact, it did so without a single vote from a Republican.

In Nevada, where the proposal has come up twice before in the last decade, that party split hasn’t been much different.

In 2017, a bill sponsored by 16 Democrats and no Republicans got one hearing before dying in committee. And in 2009, the proposal made it out of committee and was passed by the Assembly on a party line vote, with every Democrat voting for it and every Republican against it, before dying in the Senate.

But this year could be different. Like Colorado, Democrats seized control of the trifecta of state government by winning the majority of both houses of the Legislature and the governor’s mansion, which hasn’t happened in Nevada since the early 1990s.

As for what’s next for the bill, time will tell. It has not yet been scheduled for a committee work session, where it could be voted on and sent to the full Assembly for a vote. The deadline for bills to be voted out of their first committee is April 12.