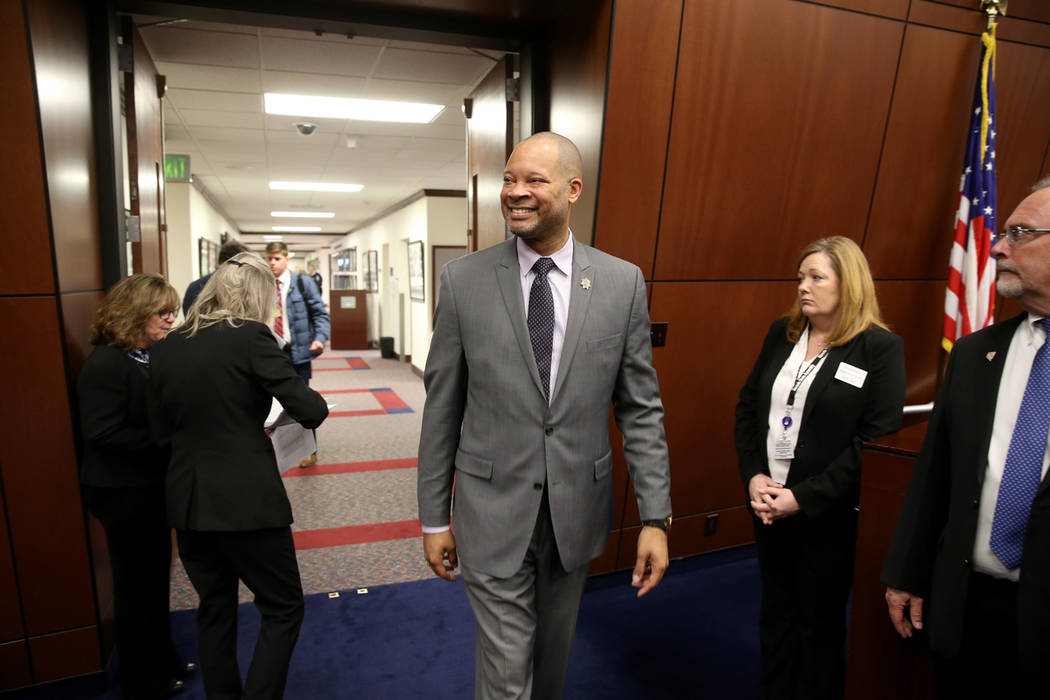 Attorney General Aaron Ford walks into the Assembly chamber in the Legislative Building in Carson City on the first day of the 80th session of the Nevada Legislature Monday, Feb. 4, 2019. (K.M. Cannon/Las Vegas Review-Journal) @KMCannonPhoto

CARSON CITY — Tougher domestic violence policies are now on the books in Nevada.

It also introduces a penalty specific to the domestic battery of pregnant women, punishable at first as a gross misdemeanor and then as a category B felony.

“This is an exciting day for law enforcement, to be able to protect the citizens that we’re sworn to protect,” said Nevada Attorney General Aaron Ford, who sponsored the bill. “Domestic violence is a growing trend in a negative sense for our state.”

The bill was one of three domestic violence measures Ford sponsored this session, each of which cleared the Legislature before close Monday.

Assembly Bill 41, also signed into law Monday, requires government agencies and public utilities to accept fictitious addresses instead of real ones. The state already allows the Department of Health and Human Services to issue fictitious addresses as a protective measure to victims of domestic violence, sex trafficking, stalking and sexual assault.

The state’s largest domestic violence organization, SafeNest, helps secure about 500 to 700 of such fictitious addresses a year for victims and their children, the organization’s CEO, Liz Ortenburger, said.

Assembly Bill 19, which awaits the governor’s signature, provides alternate methods of service for temporary protective orders, which under current law can be served only in person — a system that can be abused if the person subject to the order purposefully avoids its service.

The measure also expands the amount of time an extended protection order can be in effect from one year to two, and it increases penalties for people who repeatedly violate protective orders.

“We view this trio of bills as a very important step forward in the protection of domestic violence victims and survivors,” Ford said.

While Ortenburger said SafeNest was enthusiastic about many of the bills’ changes, the organization remained neutral when it came to increased penalties.

“We think of domestic violence as a unit,” she said. “We’ve got a batterer and a victim, and oftentimes there’s children as well. When we increase the penalties on one person, the whole unit suffers. We can really be putting the victim and the children in harm’s way from a financial standpoint.”

Still, Ortenburger said charges like strangulation and assault with a deadly weapon can indicate that violence is escalating toward homicide, in which case increased penalties “make sense.”

“We were really proud and happy to work with the AG’s office,” Ortenburger said. “The bulk of what these bills are doing is protecting domestic violence victims, and we need more of that in our state.”

The loose network of anti-government extremists are known for “paper terrorism,” and the documents are meant to harass people in response to perceived grievances, experts say. One Metropolitan Police Department detective who investigates sovereign citizen cases received death threats.

“Common sense, you would think that it should be illegal,” Metro lobbyist Chuck Callaway said of creating and issuing fake court documents. “But the way our statutes are written, the sovereign citizen folks know how to exploit the loopholes in the law and to take advantage of what’s not in law.”

The new measure closes that loophole and “gives us the tool we need to address it.”

Sisolak signed about 60 other bills Monday, including Assembly Bill 492, which adds post-traumatic stress disorder to worker’s compensation benefits for first responders who have experienced trauma while on the job, including 911 call dispatchers.

The bill was inspired in part by the events of the Oct. 1, 2017, shooting, after which many had no recourse but to file a worker’s compensation claim.

Thousands of traffic warrants thrown out due to new law