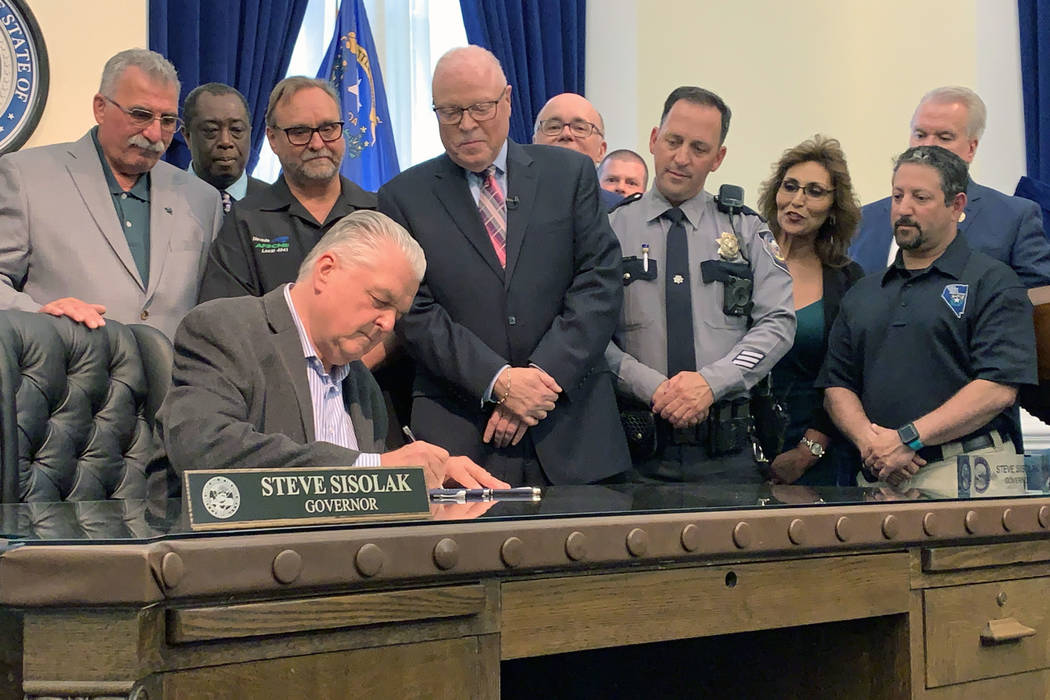 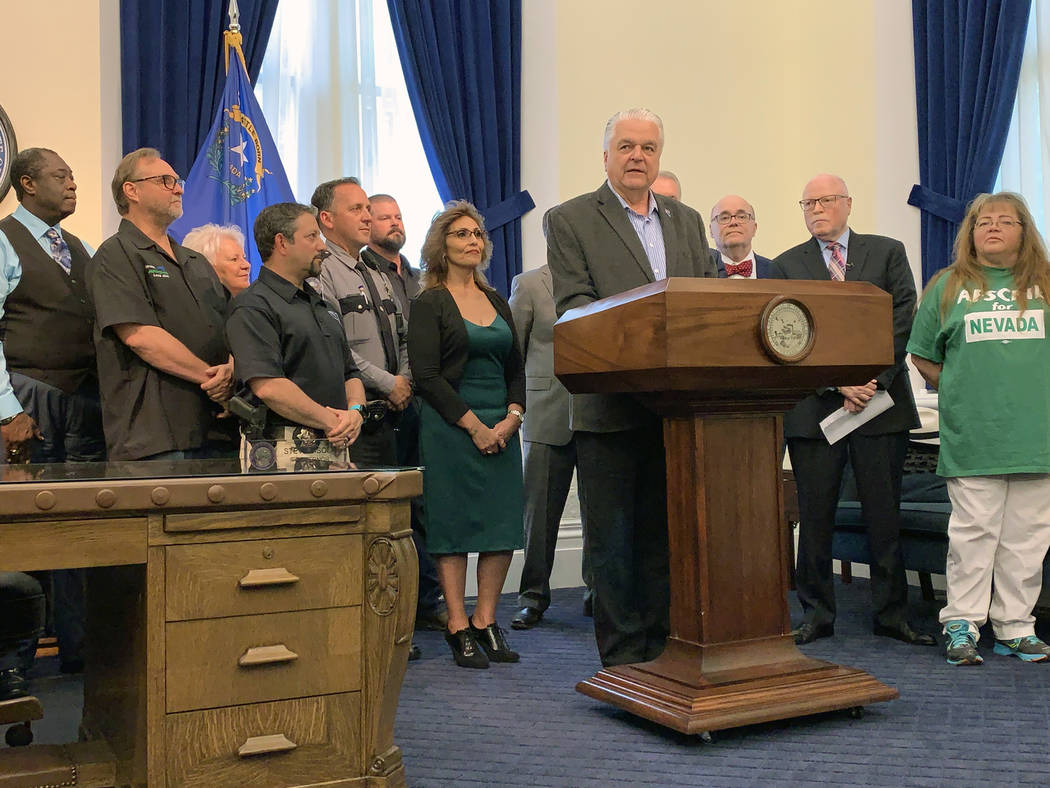 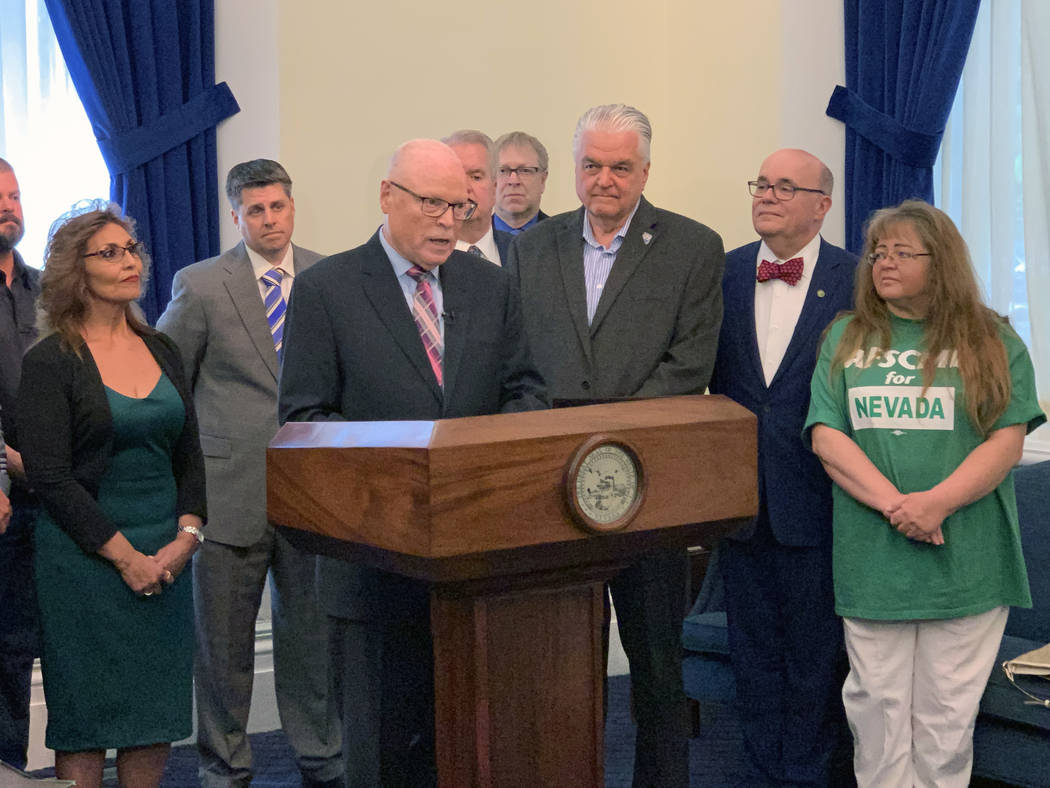 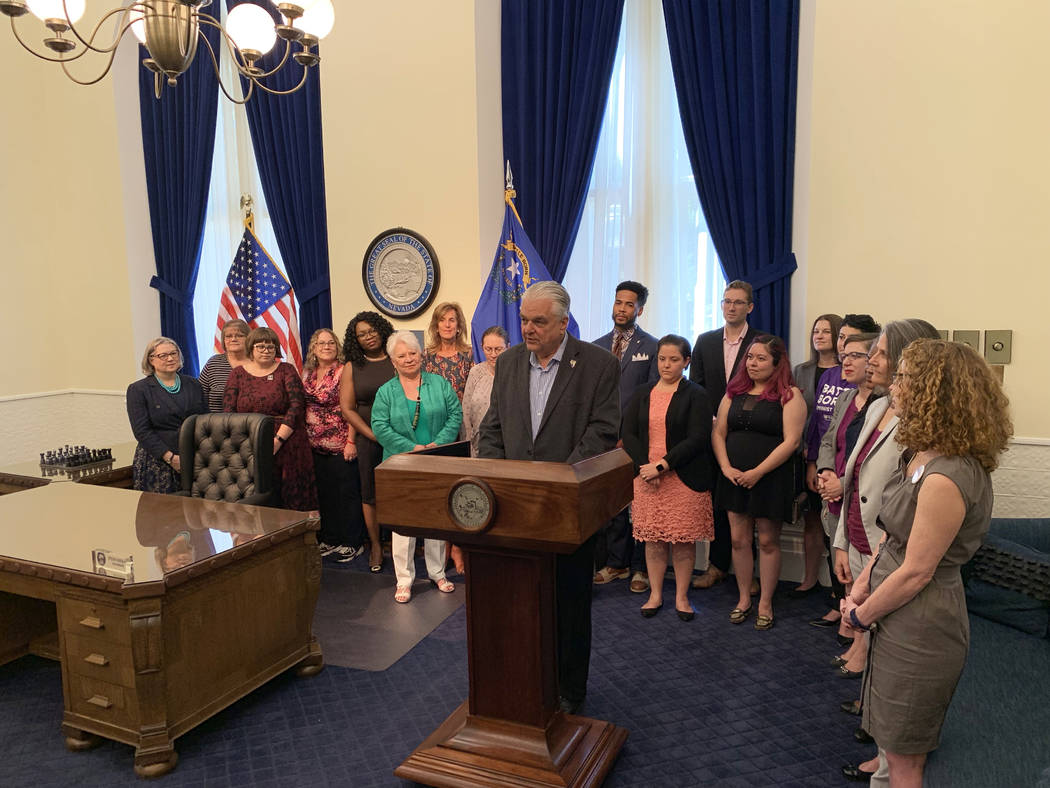 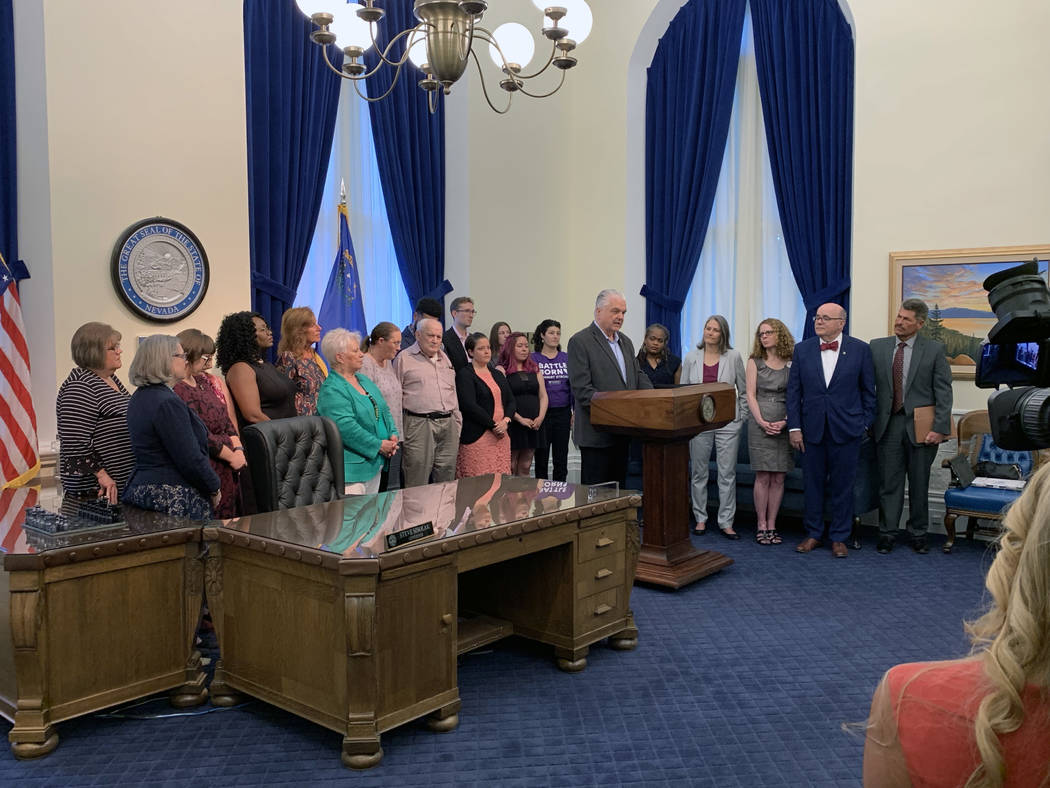 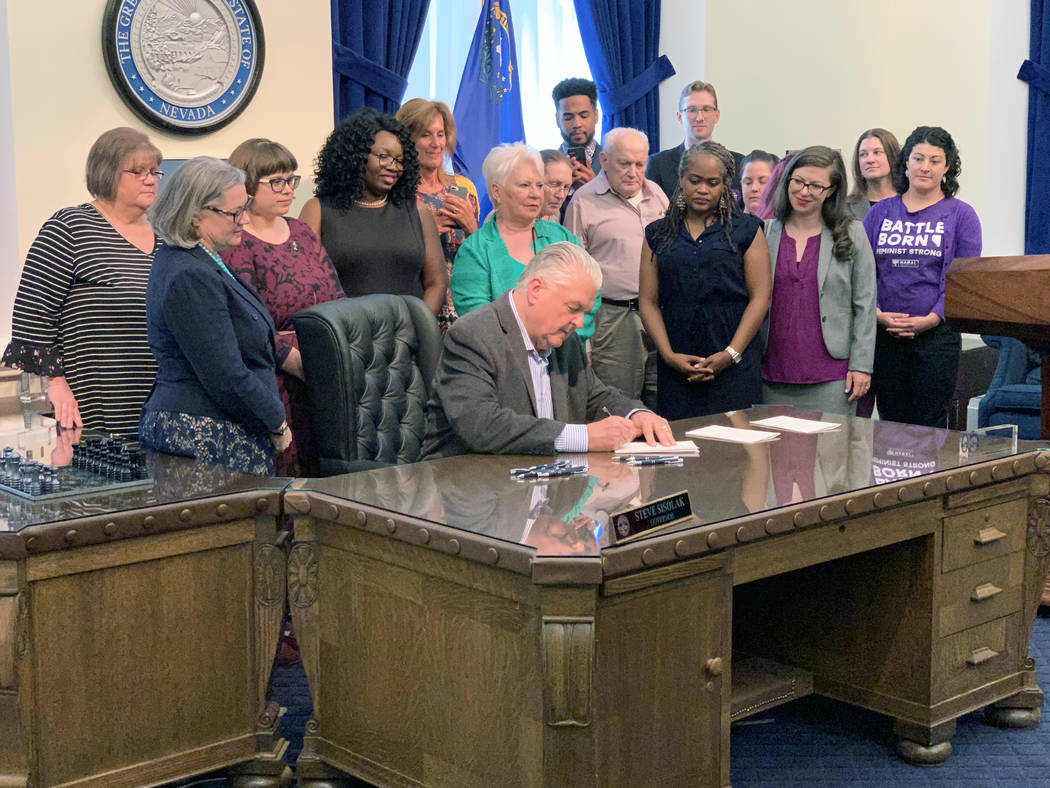 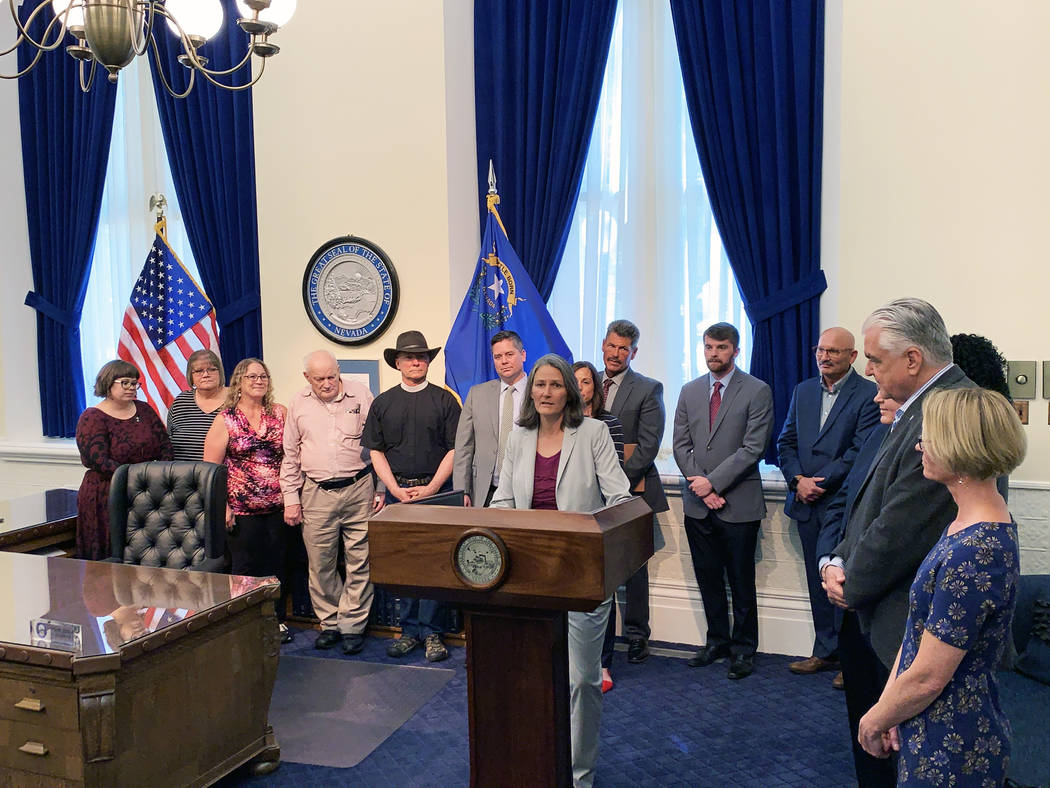 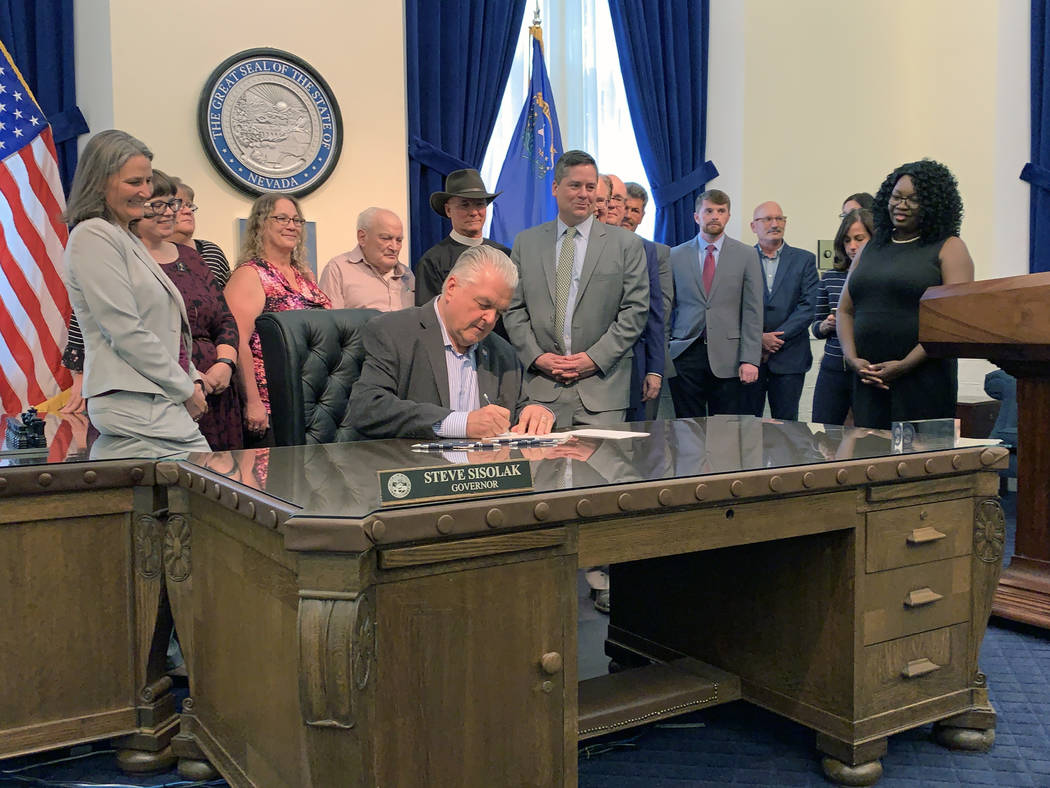 CARSON CITY — Higher wages and stronger protections are on the horizon for working Nevadans.

Gov. Steve Sisolak on Wednesday signed Assembly Bill 456 into law, fulfilling one of the state Democrats’ biggest promises from the campaign trail. Under the new law, the minimum wage in Nevada will increase gradually to $12 per hour by over the next five years for employees who are not offered health insurance and $11 for those who are.

The incremental increases start July 1, 2020, when the state’s minimum wage will rise by 75 cents, and will continue at that rate each year until it hits its apex in 2024.

Nevada’s wage floor has not changed since 2010 when it was set at $8.25 for workers not offered health benefits and $7.25 otherwise. Nearly 300,000 Nevadans will see higher pay under the new minimum wage law, according to an study conducted by the Washington, D.C.-based think tank Economic Policy Institute.

“Keeping working Nevadans stuck in a 10-year-old minimum wage erodes the real value and purchasing power of the wages of hardworking Nevadans,” Sisolak said Wednesday before signing the bill. “But with this bill, hundreds of thousands of working Nevadans will see a difference in their paycheck — extra hard-earned money they can use to put food on the table, save for their kids’ education, and re-invest into the economy.”

Advocates hoped that with Democrats in control of both houses of the Legislature and the governor’s office, Nevada would join the likes of California, Illinois, New York and Massachusetts in raising the minimum wage to $15 per hour. That wasn’t the case this session, but many of those advocates are coming away from the session feeling like Nevada took a step in the right direction.

“It’s a good start,” said Laura Martin, executive director of the Progressive Leadership Alliance of Nevada. “We’re still going to be fighting for $15, but $12 is a significant win.”

The $12 mark was born out of conversations with both voters and business owners, Speaker Jason Frierson, D-Las Vegas, told reporters Wednesday.

“This was a very collaborative conversation about what makes sense for our state. And we didn’t necessarily want to mimic what any other states did. So we talked with the chambers, we talked with large- and small-business owners to find out what we could do to help improve our economy here, but not put people out of business,” said Frierson, who sponsored AB456. “And so the $12, over a five-year period, was something that I think, ultimately landed in most folks’ comfort level.”

SB166 codifies the federal Lilly Ledbetter Fair Pay Act from 2009 into state law and gives the Nevada Equal Rights Commission more teeth and options in handling complaints of gender discrimination in the workplace.

Full-time working women earn 80 percent of what their male counterparts earned, according to the most recent analysis of national data from the U.S. Census Bureau.

In Nevada, that gap is slightly smaller, with women earning roughly 84 cents for every dollar a man makes, according to the National Partnership for Women in Families. That gap equates to a roughly $7,100 difference in annual earnings between men and women in Nevada.

For women of color, that gap is significantly wider. Black women in Nevada make 66 percent of what white men make. For Hispanic women, it’s 54 percent. And for Asian women, 69 percent, according to the National Partnership for Women and Families.

“Equal pay isn’t just a women’s issue, it’s a family issue. Pay equity, or the lack thereof, impacts men, women and children.” Sisolak said. “A loss of hundreds of thousands of dollars, or even over a million, over a woman’s working lifetime can mean barriers to homeownership. It can mean financial obstacles to their children’s education. And it can mean a less secure retirement.”

The governor also signed Senate Bill 312, which requires companies with 50 or more employees to offer at least 40 hours of paid sick leave a year.

“These bills are about fairness and dignity for the working men and women of this state,” Sisolak said of the collection of bills.

■ Senate Bill 425: Expands Medicaid funding to help vulnerable populations such as the elderly and disabled with affordable housing.

■ Assembly Bill 533: Creates the Cannabis Compliance Board to oversee regulation of the state’s marijuana industry.