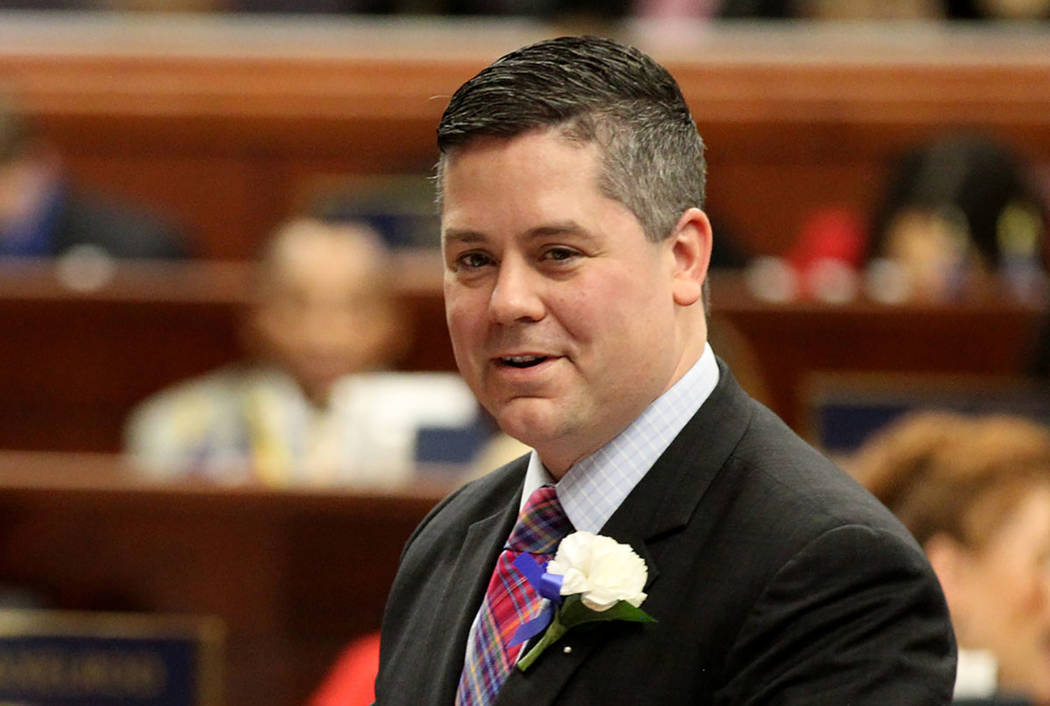 Assemblyman Steve Yeager, D-Las Vegas, signs the oath of office forms on the Assembly floor in the Legislative Building in Carson City on the first day of the 80th session of the Nevada Legislature Monday, Feb. 4, 2019. (K.M. Cannon/Las Vegas Review-Journal) @KMCannonPhoto

CARSON CITY – Compensation for wrongful imprisonment, up to $100,000 a year for those who spent 20 or more years behind bars for crimes they did not commit, won final passage in the Nevada Legislature Sunday and now heads to the governor.

An amended version of Assembly Bill 267 passed the Senate unanimously and the Assembly concurred with the changes several hours later. The bill sponsor, Assembly Steve Yeager, D-Las Vegas, hugged Assemblyman William McCurdy II, D-Las Vegas, on the Assembly floor when he learned of the Senate’s passage.

“It’s just a huge relief,” Yeager said later. “I mean, when I saw the vote in the Senate it really felt like a weight was lifted off of my shoulders.”

The preamble to the bill notes that nearly 2,400 people are listed on a national registry of exonerations, 13 of them from Nevada. Among Nevada’s group is DeMarlo Berry, a Las Vegas man released from prison in 2017 after serving 22 years for a 1994 murder he did not commit.

Under the bill, those released from wrongful imprisonment can sue, and if they prevail, can receive a certificate of innocence and have records related to their conviction sealed. Those who served up to 10 years in prison stand to receive $50,000 for each year behind bars. The award climbs to $75,000 per year for those imprisoned up to 20 years and $100,000 per year for those who serve longer. It also provides a minimum of $25,000 for every year someone serves on parole and probation or years spent on a sex offender registry.

“To run a bill like that for DeMarlo Barry, and not just him, but for the other 12 or 13 people we know about and, you know, it’s a lot of pressure to make sure that you get it right and you can get it through,” Yeager said. “I think for the state of Nevada, it was absolutely the right thing to do.”

If Gov. Steve Sisolak signs the bill, Nevada will become the 35th state to offer some sort of compensation to the wrongfully convicted.