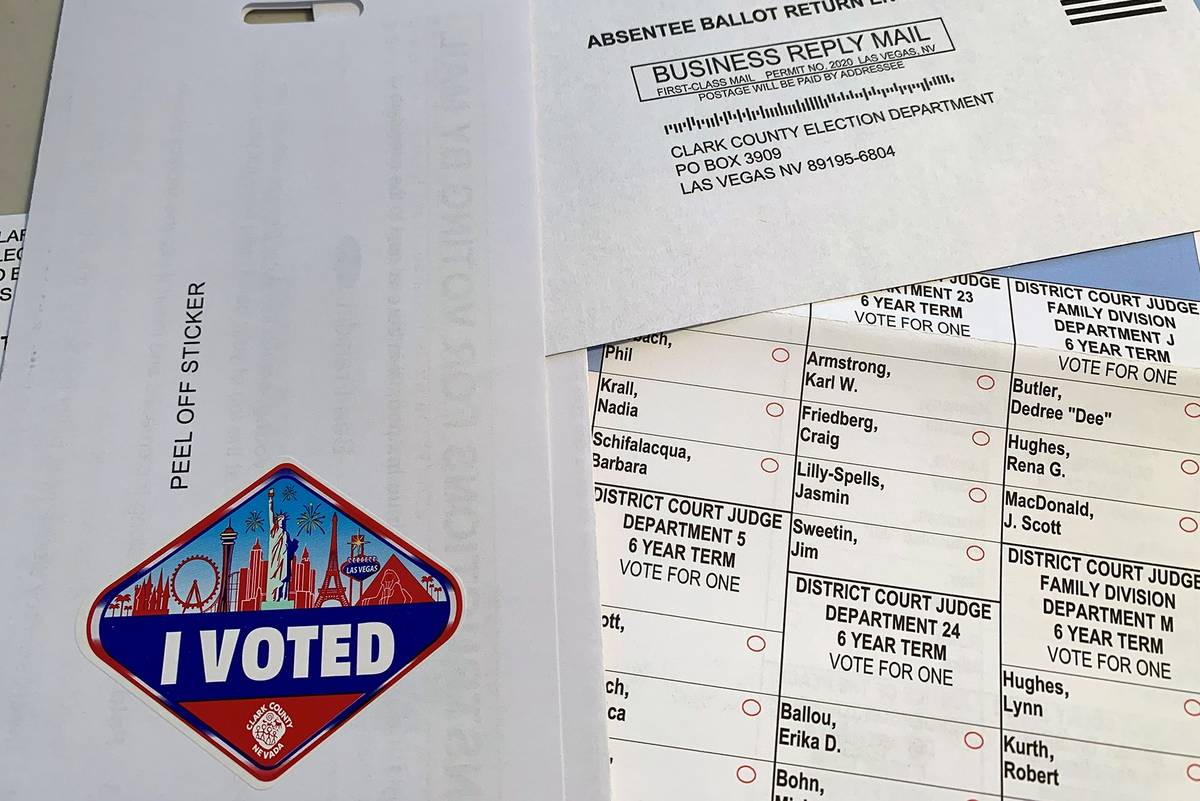 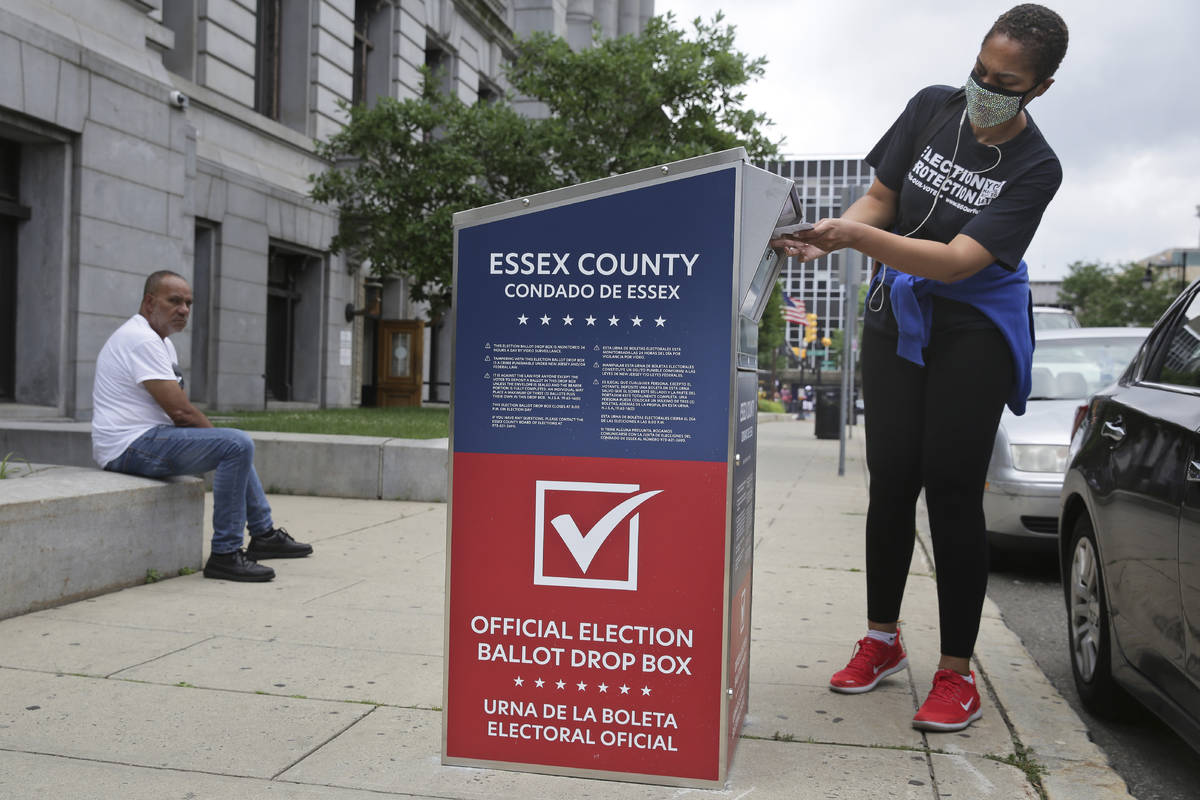 A woman drops her mail-in ballot into a drop box in Newark, N.J., Tuesday, July 7, 2020. New Jersey Democrats and Republicans will choose their candidates for president, Senate and House on Tuesday, but because of the COVID-19 outbreak, they'll be doing it mostly by mail-in ballots. Voters have until 8 p.m. Tuesday to get their ballots postmarked, put in a county drop box or dropped off in person at the county board of elections. (AP Photo/Seth Wenig)

Nevada Secretary of State Barbara Cegavske said the state plans to return to a traditional, in-person election format for the Nov. 3 general election, despite a recent wave of increased COVID-19 cases during the country’s lingering coronavirus pandemic.

In an interview with the Review-Journal, Cegavske said her office would need another $4 million or $5 million to conduct an all-mail election similar to the June primary and that she lacks the funds in her budget.

She said her office does have the money to cover a higher-than-usual increase in absentee voting, and pledged to work to make applying for an absentee ballot as easy as possible online. In Nevada, no excuse is required to request an absentee ballot.

The state conducted its first all-mail election in June after Cegavske and county election leaders agreed the pandemic posed a significant risk to election workers and voter safety. It received about $5 million in federal relief to help offset increased costs.

But, Cegavske noted, officials indicated at the time that the mail-in election procedures would only apply to the June primary, not the November general election.

The COVID-19 pandemic has only worsened in the six weeks since that election, with Clark County alone regularly topping 1,000 new cases per day.

Advocates, political party leaders and county officials have raised a variety of concerns for the upcoming election, such a disenfranchisement of black and brown voters, combating the long lines seen during the all-mail primary and lingering pandemic safety concerns. Some say a move back to a traditional election during a pandemic would significantly limit voter participation.

It also remains unclear whether the secretary will approve Clark County’s election plan, which calls for a mixed format of mailing ballots to all active voters, opening up additional early voting locations and reopening traditional election day polling places to accommodate what Registrar Joe Gloria believes will be a record-setting turnout.

Cegavske’s statements come on the heels of a special session of the Legislature in which lawmakers made substantial cuts to the state budget due to the economic downturn related to COVID-19. For months, the state has worked to balance the threat to Nevadans’ health with the financial woes stemming from full and limited business shutdowns.

Cegavske said she believes a traditional, in-person election can be conducted safely, and noted that people are returning to regular daily activities now that the state has begun gradually reopening businesses shuttered in the early phases of the pandemic.

Another special session is expected before the Legislature officially reconvenes in 2021, and Sisolak said in a statement one of the issues to be addressed would be “ensuring Nevadans can exercise their fundamental right to vote in a way that does not dangerously expose them to increased risk of COVID-19 infection.”

In response to Cegavske’s comments, Sisolak spokeswoman Meghin Delaney said it remains critical that the upcoming election have significant safeguards.

“The discussion around voting shouldn’t be whether we do all in-person with limited mail options or all-mail voting with limited in-person options,” she said. “It is essential in a pandemic that we make both methods of voting equally available so the voters can participate in the election safely. The governor looks forward to a public health and safety measure that reaches this goal being discussed at a subsequent special session of the Nevada Legislature.”

The Clark County Commission heard Gloria’s proposed hybrid election plan on June 19. Even his plan is not without hurdles, such as recruiting, training and protecting hundreds of poll workers during a pandemic.

Clark County spokesman Dan Kulin said Gloria was not available for an interview on Tuesday, but he confirmed that the county’s plan has not yet received necessary approval from the state. In order to treat all voting precincts in the county as mail precincts, Gloria would need Cegavske’s permission.

Cegavske said her office has not seen any drafts of proposed election-related legislation that may be taken up at a special session.

Jessica Hanson, executive director for the Nevada Republican Party, said her party favors a traditional election over any plan that relies heavily on absentee balloting.

“In a time where we are in an economic downfall already, why are we going to spend all that money to be mailing out all those ballots to voters?” she said of Gloria’s proposed plan.

The state GOP — and, eventually, the White House — circulated photos of ballots strewn about several Las Vegas apartment complexes during the weeks leading up to the primary. National and state Republicans maintain all-mail elections are a recipe for voter fraud.

Republican claims of actual voter fraud in recent elections throughout the country remain largely unfounded, and a federal judge rejected a conservative group’s lawsuit that argued the mail election should be scrubbed because of fraud concerns.

Another concession to the Democrats’ lawsuit — opening two additional in-person voting centers on election day — proved extremely necessary, as some voters waited in long lines until after 2:30 a.m. to cast a ballot.

“While our state faces an unprecedented health crisis, we are working to both protect Nevadans from spreading this virus as well as their constitutional right to vote,” he said. “That’s why we must have both an expansive vote by mail option as well as a robust in-person voting system.”

McCurdy is also a member of the state Assembly, and would be called upon to vote on any election plan that comes before a future special session.

Shifting back to a mostly in-person model for the general election while cases of the coronavirus continue to rise would significantly reduce voter access, said Emily Zamora, executive director of Silver State Voices, a progressive-leaning nonprofit that advocates for expanding civic access in Nevada.

“We need to make voting more accessible than ever, especially under these circumstances,” Zamora said.

Zamora said there should be a push for absentee ballots to be sent to all active voters in the state, but while also better balancing the number in-person voting locations so as to avoid the hourslong lines seen during the primary.

Silver State Voices and a coalition of other organizations sent a letter to Sisolak and Democratic Legislative leaders advocating for election issues to be put on the agenda for the potential second special session.

One of the big pushes, Zamora said, is ensuring that all active voters in Nevada are sent a ballot along with pre-paid postage in order to return it. She also said that there need to be more in-person voting locations across the state.

There are people who don’t trust voting,” Zamora said. “Whether they come from communities of color and don’t trust that the government is going to cast their vote. Or it’s just people listening to political rhetoric and feel their vote is not going to be counted.”

Zamora also said they are pushing for legislation that would allow people to gather and turn in ballots on behalf of others. That so-called “ballot harvesting,” Zamora added, would greatly benefit Nevada’s 27 tribal nations, where traditional addresses are not a guarantee and for whom casting a mail-in ballot can require several hours of driving to and from post offices to pick up their voting material.

“We do think it’s the safest way to vote,” Zamora said of mail-in elections, “but there’s still a lot of work collectively that still needs to be done.”