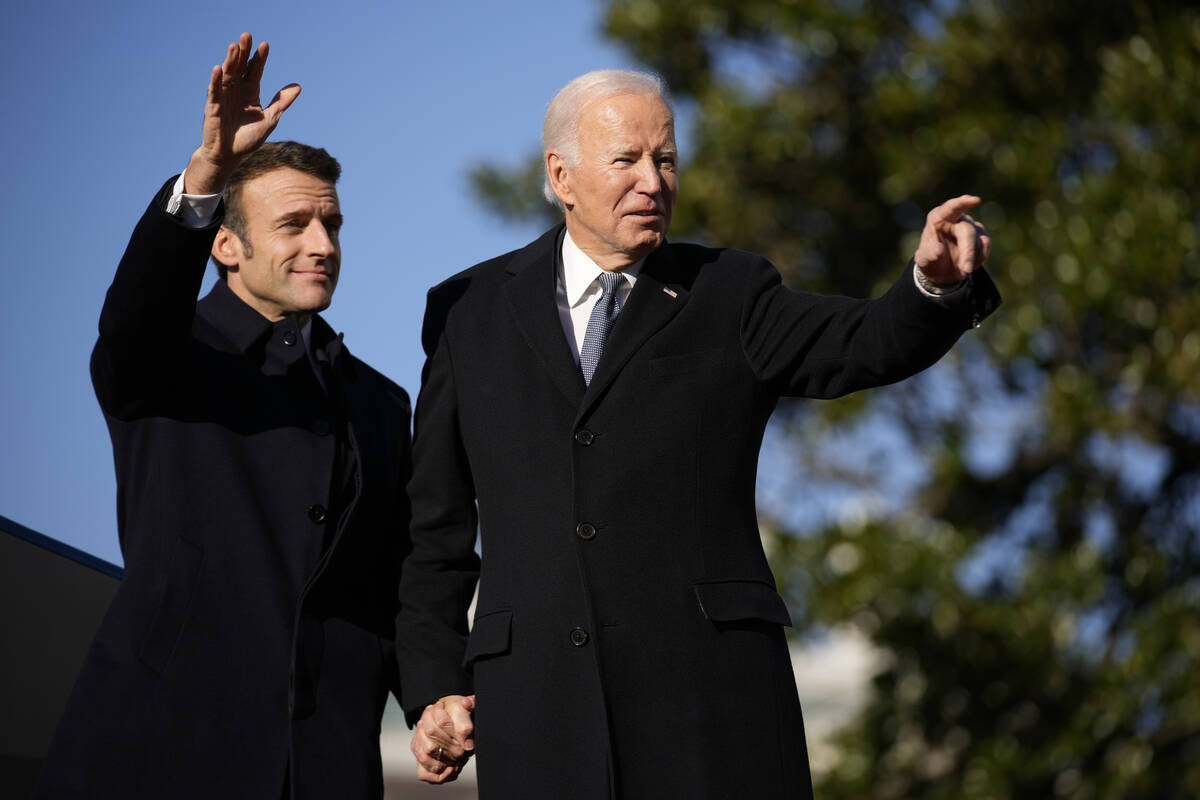 President Joe Biden and French President Emmanuel Macron stand on the stage during a State Arrival Ceremony on the South Lawn of the White House in Washington, Thursday, Dec. 1, 2022. (AP Photo/Andrew Harnik) 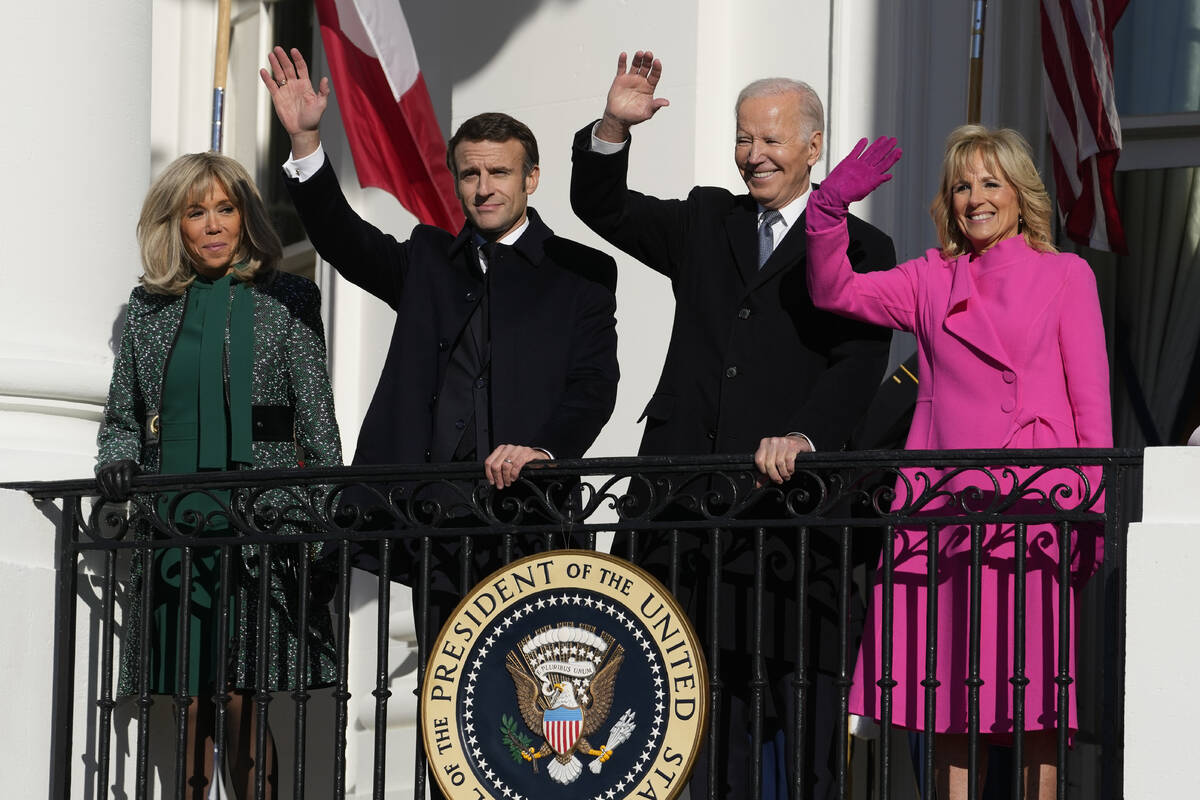 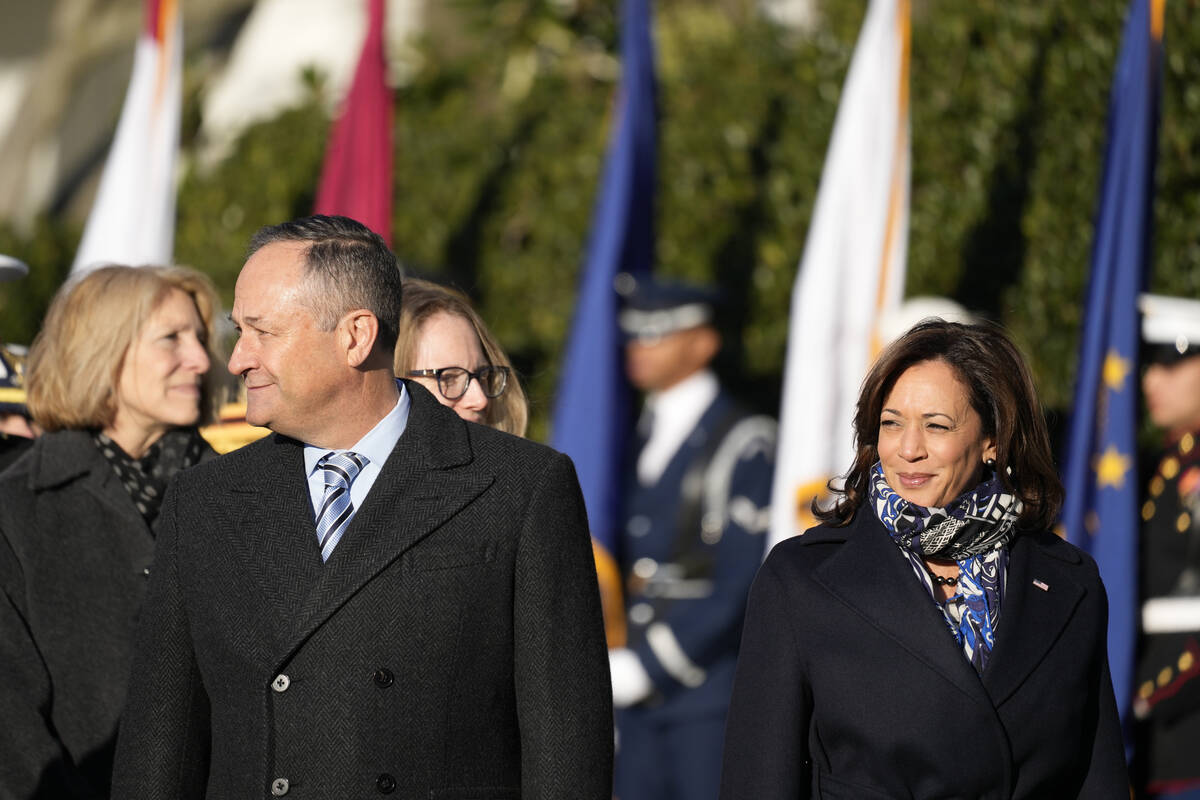 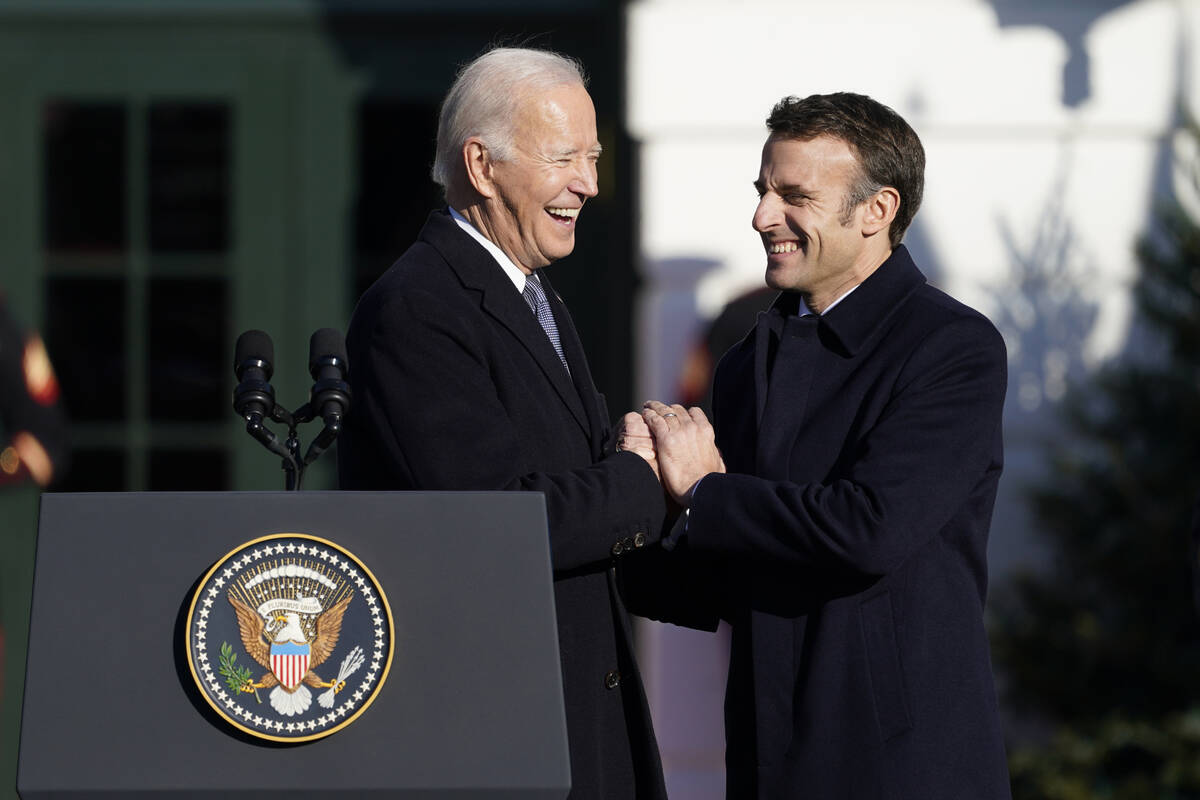 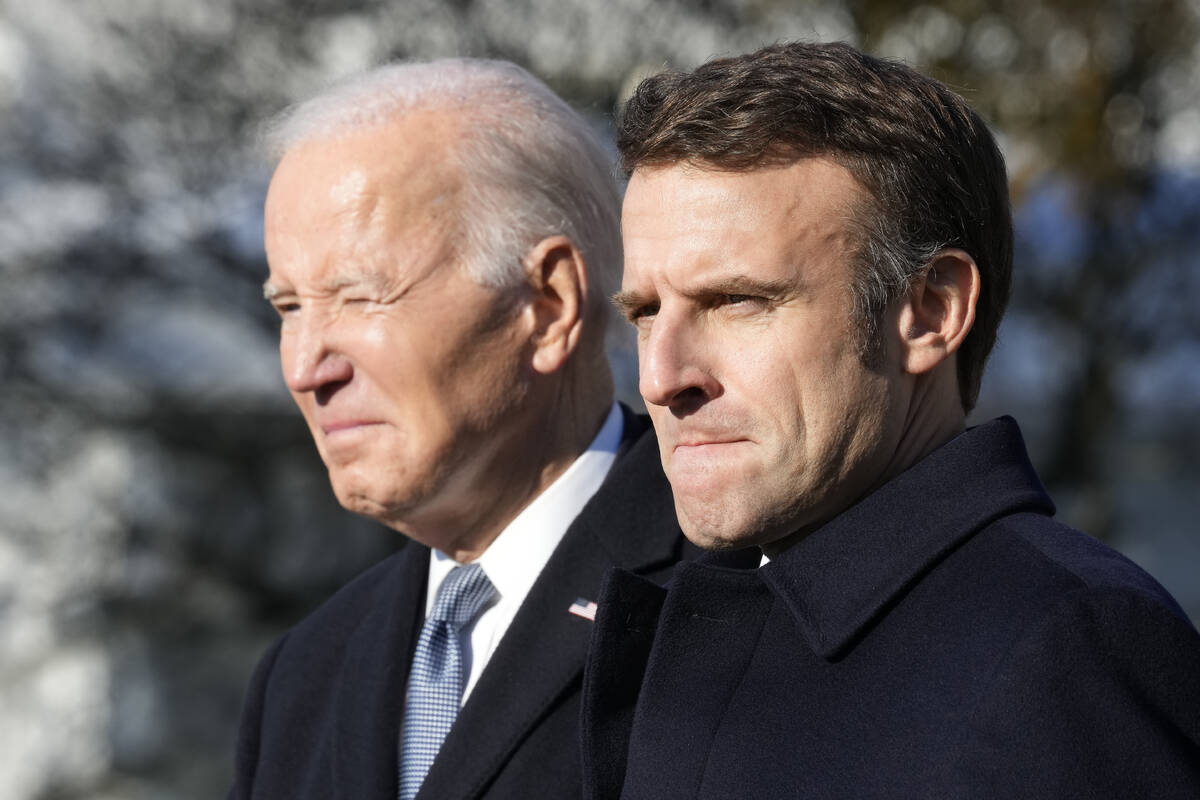 President Joe Biden and French President Emmanuel Macron stand on the stage during a State Arrival Ceremony on the South Lawn of the White House in Washington, Thursday, Dec. 1, 2022. (AP Photo/Alex Brandon)

WASHINGTON — Presidents Joe Biden and Emmanuel Macron are celebrating the long-standing U.S.-French relationship, but these are friends with differences. The French leader is using his visit to Washington to sharply criticize aspects of his ally’s signature climate law as a bad deal for Europe.

Biden was to honor Macron with the first state dinner of his presidency Thursday evening. First, the presidents are holding talks in the Oval Office that officials from both sides said were expected to largely center on efforts to stay united in their response to Russia’s war in Ukraine and to coordinate their approach to an increasingly assertive China.

Hundreds of people gathered on the South Lawn on a sunny, chilly morning for a pomp-filled official arrival ceremony that included a 21-gun salute and review of troops. Ushers distributed small French and American flags to the guests who gathered to watch Biden and Macron start the state visit.

Both leaders at the ceremony paid tribute to their countries’ long alliance while acknowledging the difficult moments ahead as the two nations struggle to maintain Western unity that is showing some wear nine months into Russia’s invasion of Ukraine.

“The choices we make today and the years ahead will determine the course of our world for decades to come,” Biden said. “And the United States could not ask for a better partner in this work in France.”

Amid the talk of unity, differences were shadowing the visit.

Macron has made clear that he and other European leaders are concerned about the incentives in a new climate-related law that favor American-made climate technology, including electric vehicles.

He criticized the legislation, known as the Inflation Reduction Act, during a luncheon Wednesday with U.S. lawmakers and again during a speech at the French Embassy. Macron said that while the Biden administration’s efforts to curb climate change should be applauded, the subsidies would be an enormous setback for European companies.

“The choices that have been made … are choices that will fragment the West,” Macron said. He said the legislation “creates such differences between the United States of America and Europe that all those who work in many companies (in the U.S.), they will just think, ‘We don’t make investments any more on the other side of the Atlantic.’”

In an interview that aired Thursday on ABC’s “Good Morning America,” Macron said the U.S. and France were working together well on the war in Ukraine and geopolitics overall, but not on “some economic issues.” The U.S. climate bill and semiconductor legislation, he said, were not properly coordinated with Europe and created “the absence of a level playing field.”

Earlier, he had criticized a deal reached at a recent climate summit in Egypt in which the United States and other wealthy nations agreed to help pay for the damage that an overheating world is inflicting on poor countries. The deal includes few details on how it will be paid for, and Macron said a more comprehensive approach is needed — “not just a new fund we decided which will not be funded and even if it is funded, it will not be rightly allocated.″

The blunt comments follow another low point last year after Biden announced a deal to sell nuclear submarines to Australia, undermining a contract for France to sell diesel-powered submarines. The relationship has recovered since then with Biden acknowledging a clumsy rollout of the submarine deal and Macron emerging as one of Biden’s strongest European allies in the Western response to Russia’s invasion of Ukraine.

Macron at the arrival ceremony stressed the need for the U.S. and France to keep the West united as the war continues.

“Our two nations are sisters in the fight for freedom,” Macron declared.

As for the Inflation Reduction Act, the European Union has expressed concern that tax credits, including those aimed at encouraging Americans to buy electric vehicles, would discriminate against European producers and break World Trade Organization rules.

Germany’s Economy Minister Robert Habeck said Wednesday that he believes parts of the law aren’t compatible with the WTO.

“I believe that this view is largely shared by those countries that are committed to a multilateral trading order,” he told reporters in Berlin. “The Americans know that we see it that way and the European Commission will have told them this too.”

Macron planned to make his case to U.S. officials against the subsidies, underscoring that it’s crucial for “Europe, like the U.S., to come out stronger … not weaker” as the world emerges from the tumult of the pandemic and Russia’s invasion of Ukraine, according to a senior French government official

Macron also planned to seek exceptions to the U.S. legislation for some European clean energy manufacturers, according to a French official who requested anonymity under the presidency’s customary practices.

Biden administration officials have countered that the legislation goes a long way in helping the U.S. to meet global goals to curb climate change.

Macron raised eyebrows earlier this month in a speech at a summit in Bangkok when he referred to the U.S. and China as “two big elephants” that are the cusp of creating “a big problem for the rest of jungle.” His visit to Washington also comes as both the U.S. and France are keeping an eye on China after protests broke out last weekend in several mainland cities and Hong Kong over Beijing’s “zero COVID” strategy.

Macron and his wife, Brigitte, came to the U.S. bearing gifts carefully tailored to their American hosts, including a vinyl and CD of the original soundtrack from the 1966 film “Un Homme et une Femme,” which the Bidens went to see on their first date, according to the palace.

Macron will be hosted by Harris for a lunch at the State Department before the evening state dinner for some 350 guests, a glitzy gala to take place in an enormous tented pavilion constructed on the White House South Lawn.