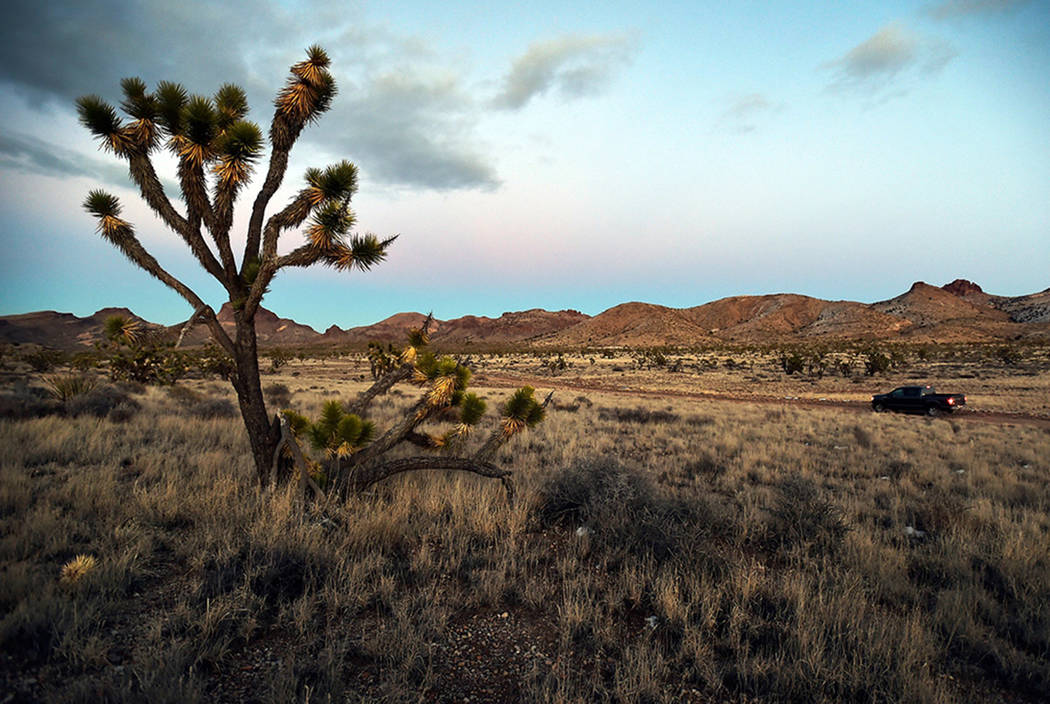 Joshua trees at Castle Mountains National Monument in eastern California on Feb. 1, 2016. The Bureau of Land Management has rejected plans for a sprawling wind energy project in Nevada, just across the border form the monument. (Las Vegas Review-Journal) 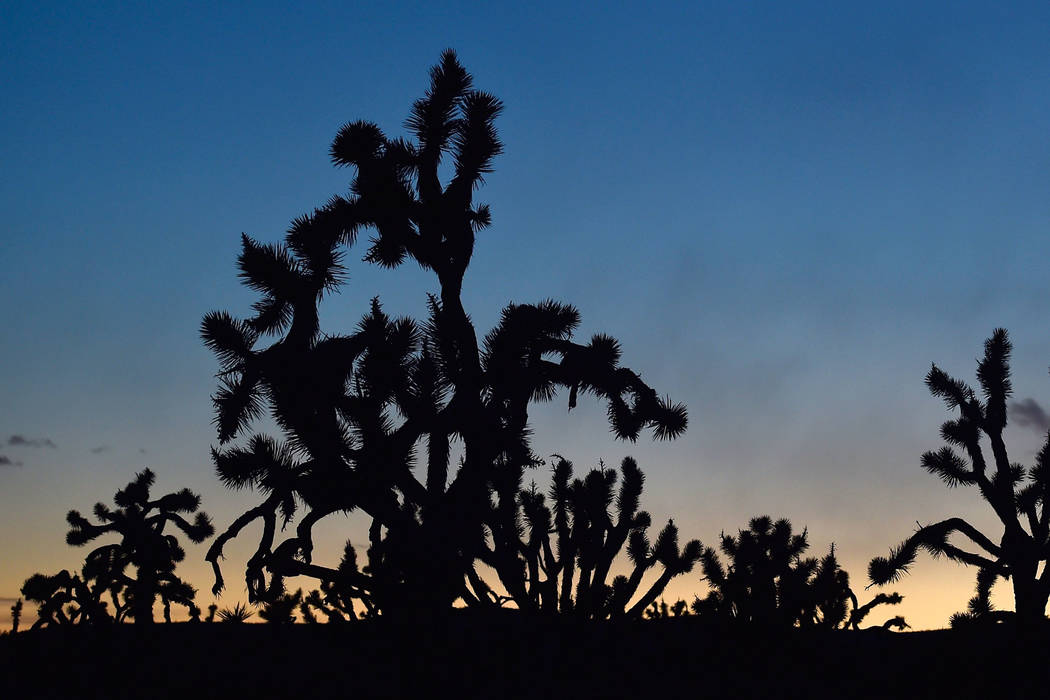 The sun goes down on Joshua trees at Castle Mountains National Monument in eastern California on Feb. 1, 2016. The Bureau of Land Management has rejected plans for a sprawling wind energy project in Nevada, just across the border form the monument. (Las Vegas Review-Journal) 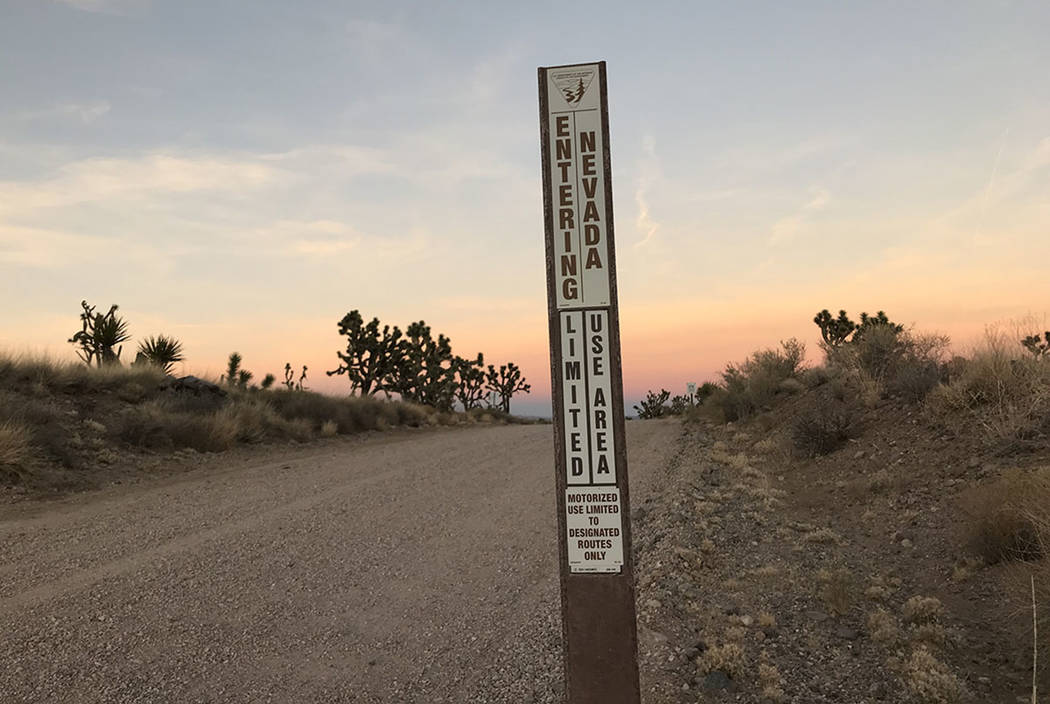 A sign marks the state line on a dirt road west of Searchlight on Nov. 25, 2017. A wind farm with as many as 220 40-story turbines has been proposed on the Nevada side of the line. Henry Brean Las Vegas Review-Journal

Federal regulators have knocked the wind out of another renewable energy project planned for the desert west of Searchlight.

The Bureau of Land Management has decided to reject a Sweden-based energy company’s application to build more than 200 turbines, each the height of a skyscraper, along a 22-mile stretch of the Nevada-California border.

The project would have covered more than 32,500 acres of public land adjacent to two wilderness areas in Nevada and the Mojave National Preserve and Castle Mountains National Monument in California.

In a written statement, the agency said it identified “multiple issues and concerns” with the Crescent Peak Wind Energy Project, including the disruption of aviation radar systems and potential impacts to mining claims and the “visual landscape” of the area.

Rudy Evenson, spokesman for the BLM in Nevada, confirmed the decision on Friday, but he could not say who made it or when. He referred additional questions to the Department of Interior’s main public information office in Washington, D.C., which did not respond to multiple requests for comment.

Eolus, the company behind the project, also did not respond to requests for comment.

Company officials previously said the wind farm would generate as much as 500 megawatts of electricity, enough for up to 125,000 homes, and produce 200 to 400 construction jobs and 20 to 40 permanent operational jobs.

“We’re just ecstatic,” said Kevin Emmerich, cofounder of the Nevada environmental group Basin and Range Watch. “We always thought this was a renewable energy project that was inappropriately sited.”

The group wasn’t alone. More than a dozen conservation groups came out against Eolus’ plans, as did a large contingent of Searchlight residents who turned out for a public meeting in April.

They raised concerns about the number of eagles that would be killed by the spinning blades and the miles of new roads that would have to be cut through the eastern edge of one of the largest Joshua tree forests in the world. They also worried that the turbines would spoil their pristine desert views and diminish dark night skies with their the blinking red warning lights.

In its statement, the BLM said it initially determined that the project did not conform with its resource management plan for Southern Nevada, but the agency decided to review it anyway rather than reject it outright.

Unrelated plans for another, smaller wind farm near Searchlight were abandoned by a different developer last year in the face of strong local opposition, including legal action brought against the BLM for approving that proposal.

Basin and Range Watch played an integral part in blocking that earlier wind development. Now Emmerich is calling on the BLM to head off any future renewable proposals west of Searchlight by adopting a resource plan amendment that would permanently protect the desert there.

“The area is too special for this kind of development,” he said.