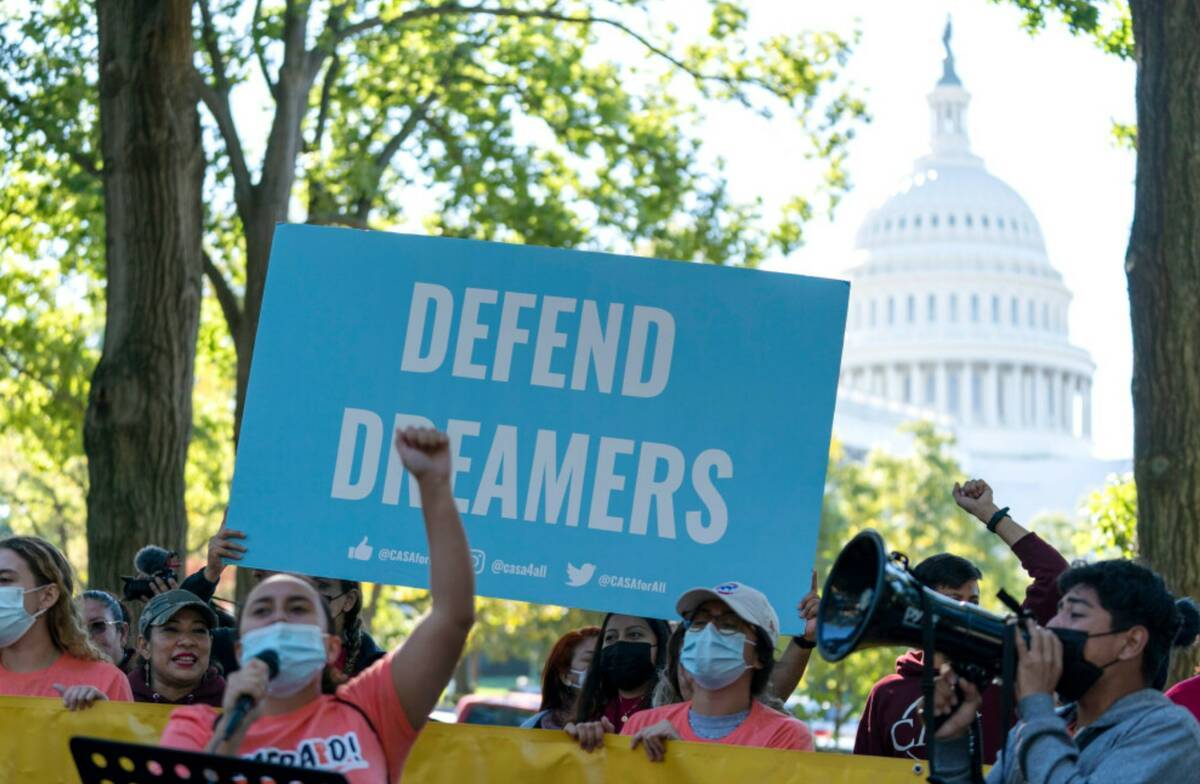 People rally outside the Capitol in support of the Deferred Action for Childhood Arrivals (DACA), during a demonstration on Capitol Hill in Washington, Thursday, Oct. 6, 2022. ( AP Photo/Jose Luis Magana)

WASHINGTON — Partisan divisions in Congress on immigration reform make it unlikely that lawmakers any time soon will tackle the thorny issue of deportation protections for immigrants who were brought here illegally as children.

Nonetheless, Nevada lawmakers in Congress called for legislative action to address the status of those currently here under the Deferred Action for Childhood Arrivals, or DACA, program.

The New Orleans-based 5th Circuit Court of Appeals this week upheld a Texas federal judge, who ruled an executive order issued by President Barack Obama in 2012 was unlawful, but should be again reviewed by the lower court to consider revisions made by President Joe Biden.

Immigrants who received protections under DACA, known as “Dreamers,” will not be affected by the appellate court ruling, but the decision blocks new applicants from the program.

There are 12,100 immigrants in Nevada protected under DACA, according to the American Immigration Council. There have been 14,278 people granted the status in the state since 2012.

U.S. Rep. Mark Amodei, R-Nev., said he agreed with the appellate court decision that found the executive order unlawful, because immigration policy and laws should be established by Congress.

Amodei also agreed with the appellate court ruling that will allow those in this country who have followed the rules to remain with deportation protection. But he said congressional action is needed to clarify their status.

He said the appellate court decision would hopefully spur Congress to act on DACA recipients “and take them out of limbo.”

“Congress hasn’t done anything since the Reagan administration,” Amodei told the Review-Journal.

The lack of congressional action has prompted Obama, former President Donald Trump and President Joe Biden to take executive action on the status of DACA recipients and other immigration issues. All have been challenged in court.

Trump tried to reverse the Obama policy on DACA in 2017, but wound up with greater legal challenges to his administration’s action to separate children from their parents trying to cross the U.S.-Mexico border.

Court challenges to presidential actions over the past decade have meant uncertainty for people in the DACA program, who must adhere to background checks, have no criminal record, have educational or military qualifications to apply and receive deportation protection.

“The constant back and forth in the courts is destabilizing for DREAMers and puts their safety and security at risk. The 5th Circuit’s ruling is distressing but I will keep fighting for a permanent solution to our broken immigration system,” said U.S. Rep. Dina Titus, D-Nev., on Twitter immediately after the court action.

Biden laid the blame of congressional inaction on Republicans in Congress.

“It’s time for my Republican colleagues to show some spine,” Cortez Masto said on Twitter.

But some Republicans in the Senate have supported legislation to address DACA recipients and provide further protections, noting that they were brought here as children and have now grown to be productive members of communities.

The Dream Act of 2021, sponsored by U.S. Sen. Dick Durbin, D-Ill., and U.S. Sen. Lindsey Graham, R-S.C., would create a path to citizenship for “Dreamers” who met criteria and without a criminal record.

It has languished in the Democrat-controlled Senate Judiciary Committee.

Trump, in 2019, dangled before Congress a three-year extension of DACA in exchange for $5.7 billion to build the border wall. It was roundly rejected not only by Senate Democrats, but also Senate GOP conservatives who opposed an “amnesty” for undocumented immigrants.

Ann Coulter of FOX News excoriated Trump over his proposal, claiming: “We voted for Trump and got Jeb!”

The Trump deal failed in the then-Republican-controlled Senate, with Democrats voting against it and 14 GOP senators defecting.

In today’s evenly divided Senate, an immigration bill would need 60 votes to overcome a filibuster.

Democrats, when they controlled the House, Senate and the White House with Obama as president, also failed to address immigration reform.

There are roughly 616,000 immigrants who have DACA status, according to the National Immigration Forum

Immigration advocacy groups have lobbied to make the Obama-era rule a law since the executive order in 2012.

“Now more than ever, a legislative solution is necessary in order to end the uncertainty in our daily lives,” said Silva, executive director of Dream Big Nevada, an advocacy group.

Norma Ramirez, another DACA recipient, said she has spent a decade working to obtain a doctorate degree in clinical psychology from Fuller Theological Seminary in California.

“Nothing in my studies could have prepared me for the trauma that the Federal Courts are putting me and my fellow DACA recipients through,” Ramirez said in a statement from Dream Big Nevada.

“We need Congress to act, we need our leaders to lead on concrete and tangible immigration relief,” Ramirez said.