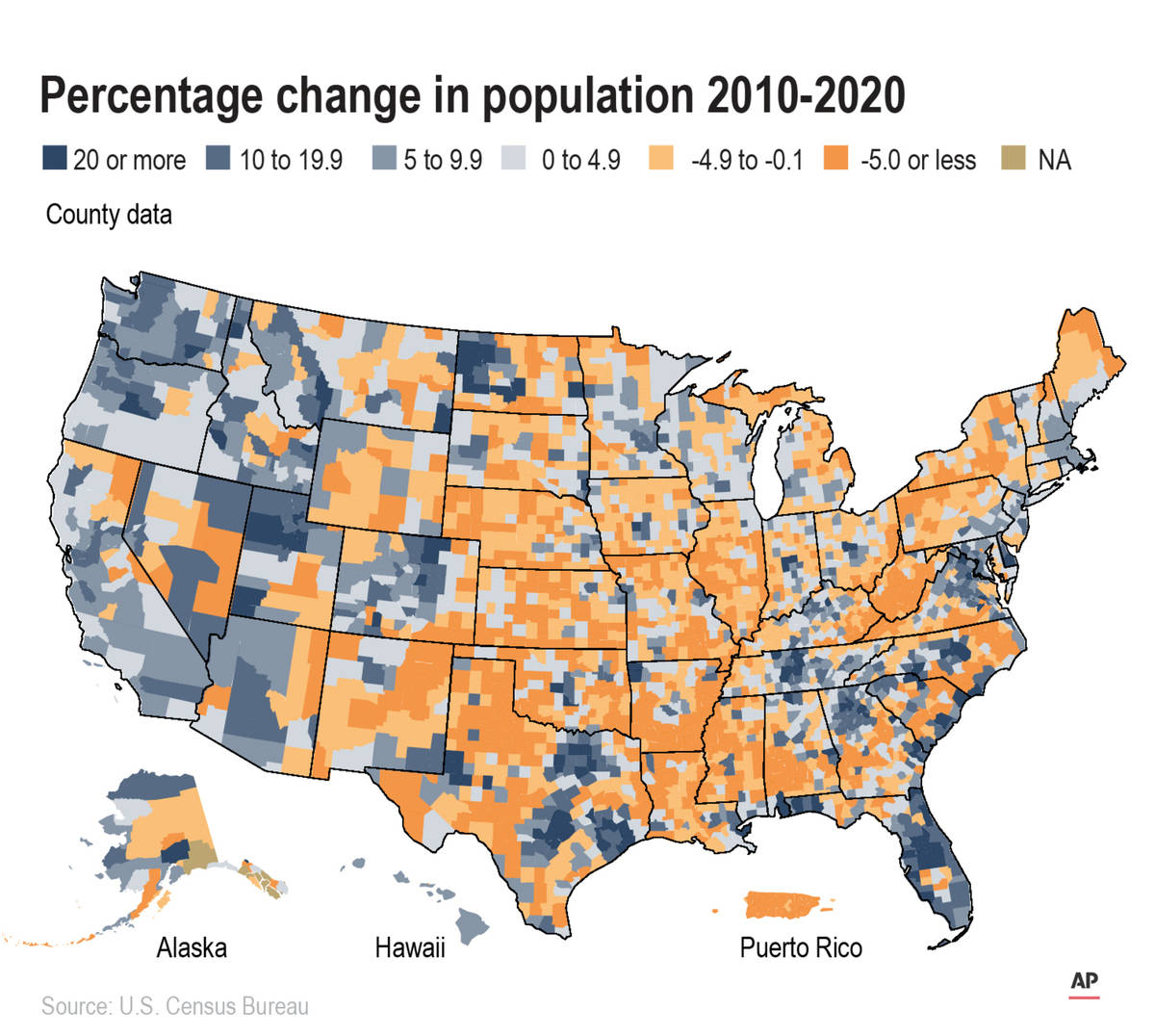 A county map of the United States and Puerto Rico shows percentage change in population from 2010 to 2020.

An increase in the number of Hispanic residents spurred growth in Nevada over the past decade, as the state’s white population fell.

That’s according to new Census Bureau data released on Thursday, documenting the results of the nation’s decennial headcount that took place last year.

Nevada’s largest population remains white, non-Hispanic people. However, they now make up less than half the state’s residents, falling from 54.1 percent to 45.9 percent between 2010 and 2020.

That could be due to more people acknowledging their full racial and ethnic background, said Nancy Brune, executive director at Guinn Center for Policy Priorities. She noted that the state’s multiracial population more than doubled, from about 79,000 to close to 167,000.

“You may be seeing people choose two or more races (on the Census), where maybe they chose just white last time,” she said.

Meanwhile, the state’s Hispanic numbers grew by more than 170,000. That group now makes up 28.7 percent of the statewide population, remaining the second-largest group.

But while Nevada remained one of the nation’s fastest growing states, Brune said it has slowed over the past decade.

“It seems like Latino growth as a driver of overall growth has flattened or remained stable,” she said.

Clark County, home to Las Vegas and more than two-thirds of all Nevadans, gained more than 314,000 residents. It also had the largest relative population growth, 16.1 percent, of any county. The county’s population is now more than 2.2 million.

The growth will affect a wide range of things, such as home prices, water use and demand for public services, said Stephen Miller, a professor of economics at UNLV Center for Business and Economic Research.

“The general rule here in Nevada has been that the population growth generates a need for more services that outpaces the tax growth, so there’s a gap that opens up,” he said.

“It’s exciting, but there’s a high level of responsibility that comes with it I think,” she said.

Overall, the state’s population grew from 2.7 million to 3.1 million people over the decade. While it wasn’t enough to garner another U.S. House seat, Miller said Nevada will receive other benefits.

“Because certain federal programs and grants are tied to population, you get a slightly larger piece of the pie,” he said.

Growth wasn’t seen everywhere in the Silver State, however.

The state’s seven least-populated counties all saw a decrease in residents. Esmeralda, Eureka, Lander, Lincoln, Mineral, Pershing and White Pine counties make up a little more than 1 percent of the state’s population.

Nevada was also one of the most diverse states in the nation, according to Census officials.

Officials determined that using a diversity index, a metric measuring the probability that two people chosen at random will be from different racial and ethnic groups.

Nevada’s score was 68.8 percent, compared with the national average of 61.1 percent. The state ranked third, behind Hawaii and California.

Non-Hispanic Black and Asian American populations both increased by about 40 percent.

Another diversity measure also ranked Nevada near the top.

Known as a diffusion score, it measures the percentage of a state’s population that is not in the three largest racial or ethnic groups.

Nevada’s score was 16 percent. Only Hawaii, Alaska and Oklahoma had higher scores.