Nevada's government employees are selling their unused paid time off at retirement, and local governments in Clark and Washoe counties owe employees more than $600 million for unused time off. 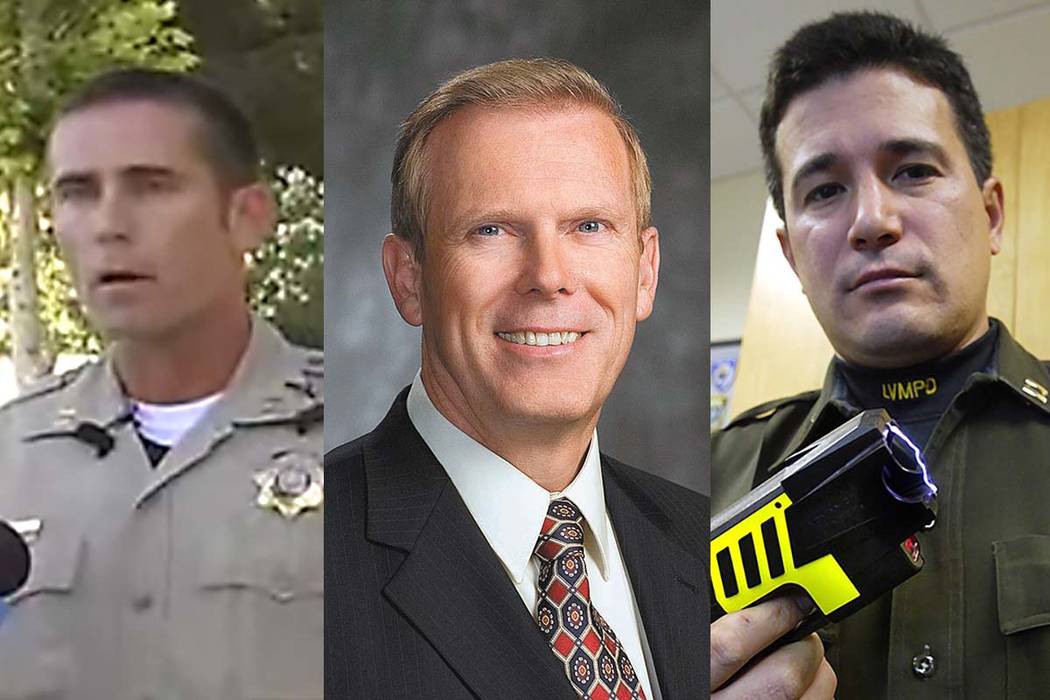 That liability grew 26 percent from 2007 to 2017, and it doesn’t represent compensation that will be paid exclusively for rest, relaxation, illness or personal time. Many of Nevada’s public employees can stockpile their sick and vacation hours and cash them out at retirement. Some of those payouts exceed $100,000.

Over the past five years, governments in Clark and Washoe counties have paid $215 million to departing employees for their unused sick and vacation time, a Las Vegas Review-Journal investigation has found. Because some governments do not budget for the payments, departments must delay hiring replacement employees to recoup expenses.

“It can be sticker shock, depending on who retires,” said Thom Reilly, chancellor for the Nevada System of Higher Education and a former Clark County manager. “If it’s not budgeted and you’re paying it out, you have to make up the cost somewhere.”

The Review-Journal surveyed 22 local government employers in Nevada — including cities, counties, police forces and school districts — and found that each allowed employees to accumulate unused leave across their careers and sell back those hours when they leave. And retiring public employees start collecting lifetime state pensions after cashing out their unused PTO.

The state of Nevada was not included in the survey because it made public payout amounts to former executive and judicial branch employees but refused to identify the names or positions of those workers. Financial reports show that as of last year, the state owed almost $150 million to its workforce for unused paid time off.

Supporters of paid-leave accumulation policies say they encourage employees to take less time off and spend long careers at the same government.

But those policies also have turned a quality-of-life benefit into taxpayer-funded nest eggs. Payouts for unused hours are based upon an employee’s final salary, not what employees were paid when they banked each hour of time off. Each banked hour effectively becomes stock that rises in value as a public employee’s base pay climbs.

The result for many workers is a massive final paycheck at retirement.

Payroll records show 344 departing workers at the surveyed governments received $100,000 or more for unused sick and vacation time from 2013 through 2017. Twenty-five people, all working in Southern Nevada, received more than $250,000 each.

When Mark Calhoun retired as Henderson’s city manager in 2012, he collected about $475,000 from the city, spread across three annual payments. The money was for thousands of unused sick and vacation hours accumulated over a nearly 30-year career. “I had vacation that I used. I took very little sick leave because I wasn’t sick,” said Calhoun, now 70.

Employees who received more than $100,000 for unused sick and vacation time took home nearly one-fourth of the money paid out, but they represent fewer than 2 percent of people who received payments.

Henderson and some other governments have responded to large payouts by reducing the number of hours that departing employees can sell back.

All it did for years and years was spiral up because of competition between local public agencies. Somebody has to start the spiral back down.

“All it did for years and years was spiral up because of competition between local public agencies,” Tarwater said. “Somebody has to start the spiral back down.”

Paid time off is a common employee benefit across the United States, but amassing unused hours for an end-of-career payday is not.

The Society for Human Resource Management surveyed thousands of public and private employers last year and found that about 1-in-7 respondents allow employees to cash out their unused vacation leave at separation.

Only 1-in-20 respondents bought back employees’ unused sick leave, according to the Virginia-based organization, which bills itself as the world’s largest professional human relations professional society.

But when college professors surveyed city and county governments nationwide in 2014, they found more than half of respondents paid separating employees for their unused sick hours. The survey did not ask about vacation leave policies.

Payouts were offered to employees at all of the Nevada governments surveyed by the Review-Journal. Rank-and-file workers had the perk enshrined in union contracts, and government executives often extend the same benefits to themselves and managers.

Some cities — like Las Vegas, North Las Vegas and Henderson — have four-day work weeks, ensuring employees receive long weekends without using paid time off. A handful of public employers — including Clark County, University Medical Center and the city of Sparks — do not cap the number of sick days most employees can cash out.

“Clearly, practices in the private sector are a lot less generous than in the public sector,” said Reilly, who co-authored the study while serving as director of the Morrison Institute for Public Policy at Arizona State University.

One of Nevada’s largest public employers, Clark County, gives workers with at least a decade of service more than a month of paid leave each year. The county has paid departing employees nearly $35 million for accumulated sick and vacation leave in the past five years. More than 50 of those employees received at least $100,000.

County Manager Yolanda King said she sees no need for a policy change because payout programs encourage employees to take less time off work. She also noted that employees aren’t eligible to receive payment for all of their unused sick leave until they spend 30 years with the county.

“You want to be able to provide benefits that will incentivize people to have long careers here,” King said.

Some citizens on the Review-Journal’s voter panel criticized the policy.

Jim Sida, a Henderson resident and former California police supervisor, said he received about $50,000 for his unused sick and vacation time when he retired in 1994. He said allowing employees to accumulate and sell back unused time off can be beneficial to recruitment and retention, but such programs need limits.

“It’s a matter of fiscal responsibility, it’s a matter of good planning for the expenditure of the taxpayer dollars and, finally, it’s to demonstrate to the public and other entities in the community the confidence that they are managing their workforce and their costs effectively,” said Sida, 69.

William Bradley, a commercial pilot who lives near the Strip, said government employees should be allowed to roll over some sick leave in case of an extended illness. But, he says, accumulation of unused vacation time can encourage unethical behavior.

“I saw that all the time when I was a federal employee with the Department of Defense,” said Bradley, 49. “People would try to take vacation without logging it, and I’m sure it happens here in local government.”

Indeed, a Review-Journal analysis revealed this month that now-retired Las Vegas Convention and Visitors Authority CEO Rossi Ralenkotter did not claim about 300 hours of paid time off for days he didn’t work.

Ralenkotter would have received about $65,000 for the leave when he retired, but he declined to take a payment for it and his other accrued hours, worth more than $234,000 in total.

As of last year, Clark County was liable for more than $120 million of unused paid time off to its workers. The Metropolitan Police Department, which is partially funded by the county, owed $122 million to its employees.

Despite the massive IOUs, the county does not budget for end-of-career payouts.

Instead, when an employee leaves, that position is left vacant until any payout costs are covered by the savings of not paying salaries and benefits. Some positions, like firefighters and department heads, are excluded from the practice.

“We can have a position that has to remain vacant for a full year because of the cost recovery time,” King said. “For the most part it’s probably within two-, three-, four-month time period on the recovery period.”

Similar cost-recovery strategies are employed by the cities of Reno and Mesquite.

Robert Fellner, transparency director for the Nevada Policy Research Institute, said the practice flies in the face of government’s duty of serving the taxpayers. “The county’s entire purpose for existing is to provide ostensibly vital public services,” Fellner said. “Leaving positions unfulfilled to pay for county employees’ ability to cash in hundreds of days worth of unused leave doesn’t make that perk free. It instead represents a failure by the county to perform its core function, or an admission that residents’ tax dollars are being used to fund a bloated workforce.”

The county does not forecast how many of its 7,300 full-time employees are expected to retire in coming years, county spokesman Erik Pappa said. But a large, ongoing wave of retiring baby boomers is expected to last until 2028, said Geoff Sanzenbacher, associate director of research for Boston College’s Center for Retirement Research.

“The baby boomer population is probably the largest generation to go through the U.S. economy, and it was one of the first generations where women worked a lot,” Sanzenbacher said. “Those two things combined means there will be a lot more retirees than previous generations.”

Though he is critical of cash-out programs, Reilly said he recognizes paid time off is an essential employee benefit.

“It’s very important that employees have access to sick leave when they need it for themselves or their families,” he said. “It’s more a question of how you manage the payouts and the accumulation.”

Clark County employee and union representative Brenda Marzan said that being able to roll over unused sick hours each year allowed her to take months of paid time off following the birth of each of her two children and weeks for two surgeries. “If I had to go out without an income, I would have no house,” she said.

But redeeming unused hours for an end-of-career payment, some at many times the value as when they were earned, remains a practice under scrutiny from executives such as Las Vegas’ Tarwater.

“There’s no logical reason for the city to pay out $100,000 in sick benefits that aren’t used when someone leaves,” he said. “A sick program is just that. It’s supposed to be an insurance policy while you’re here working. It’s not supposed to be a cash program.”