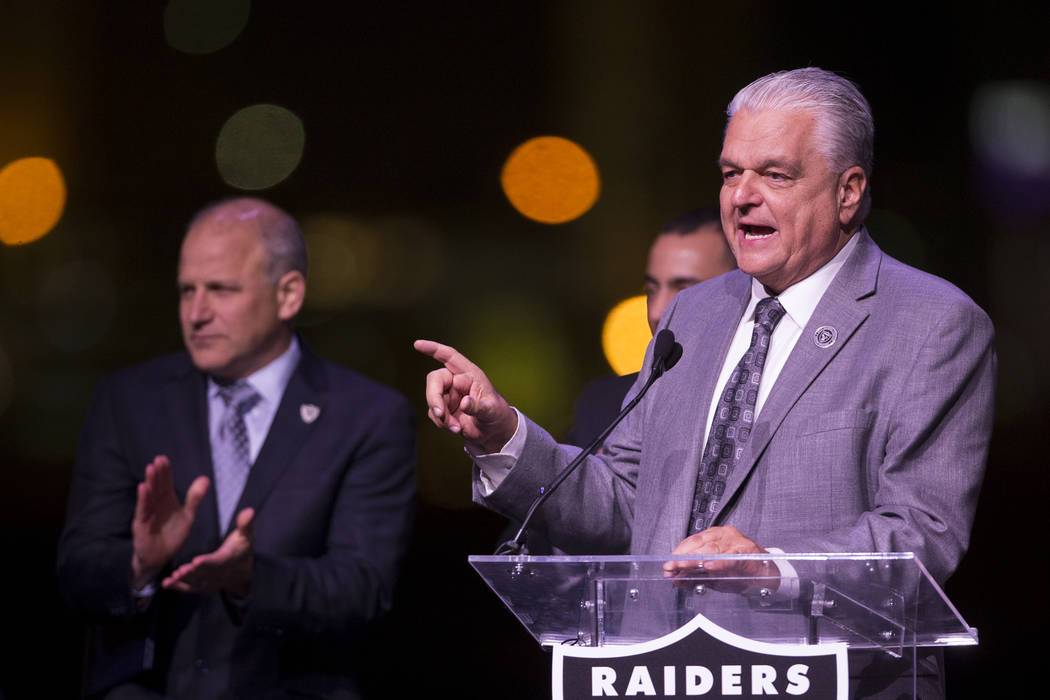 As chairman of the Clark County Commission, Steve Sisolak was a driving force in bringing the Oakland Raiders to Las Vegas.

Now at least one member of the Raiders’ top brass is helping the Democrat in his bid to become Nevada’s next governor.

Raiders President Marc Badain, who in December credited Sisolak for giving the discussion of the new Raiders stadium a “swift kick in the ass,” will be a “special guest” for a Feb. 27 private fundraiser in Las Vegas for Sisolak’s gubernatorial campaign, according to a source with knowledge of the event. The event has a $500 minimum contribution for guests.

While Sisolak’s primary opponent, Chris Giunchigliani, has been hammering him for supporting a tax subsidy to help fund the new stadium in Las Vegas for the Raiders, Badain’s appearance at the fundraiser signals that Sisolak is banking on the team’s popularity to help propel him to the governor’s mansion in Carson City.

The platforms for the two Democratic front-runners appear to line up on several subjects, with both being staunch supporters of renewable energies, boosting public education funding and protecting legal marijuana in Nevada.

But the Raiders — and the $750 million room-tax subsidy that was passed to help pay for the $1.9 billion stadium and lure the team from the Bay Area to Las Vegas — is quickly setting up to be a key issue for June’s Democratic primary battle.

In recent weeks, the campaign for Giunchigliani — who is also Sisolak’s colleague on the County Commission — has bashed Sisolak for his support of the room tax on several occasions.

When Sisolak announced in early February that he would donate his salary as governor if elected until Nevada’s education system improves, Giunchigliani campaign manager Eric Hyers touted Giunchigliani as the sole no vote on what he called the “Raiders stadium giveaway.”

“With Nevada’s public schools among the most underfunded in the entire country, she would love nothing more than to have back the $750 million that Steve Sisolak was so eager to hand to millionaire NFL owners,” Hyers said.

Sisolak, meanwhile, has maintained his support for the stadium, touting the jobs associated with the project (18,700 construction and nearly 6,000 new permanent jobs predicted), the additional tax revenue that the stadium is expected to generate and the fact that most of the $750 million subsidy will be paid for by a increase in hotel room taxes, rather than a flat tax on Nevada residents.