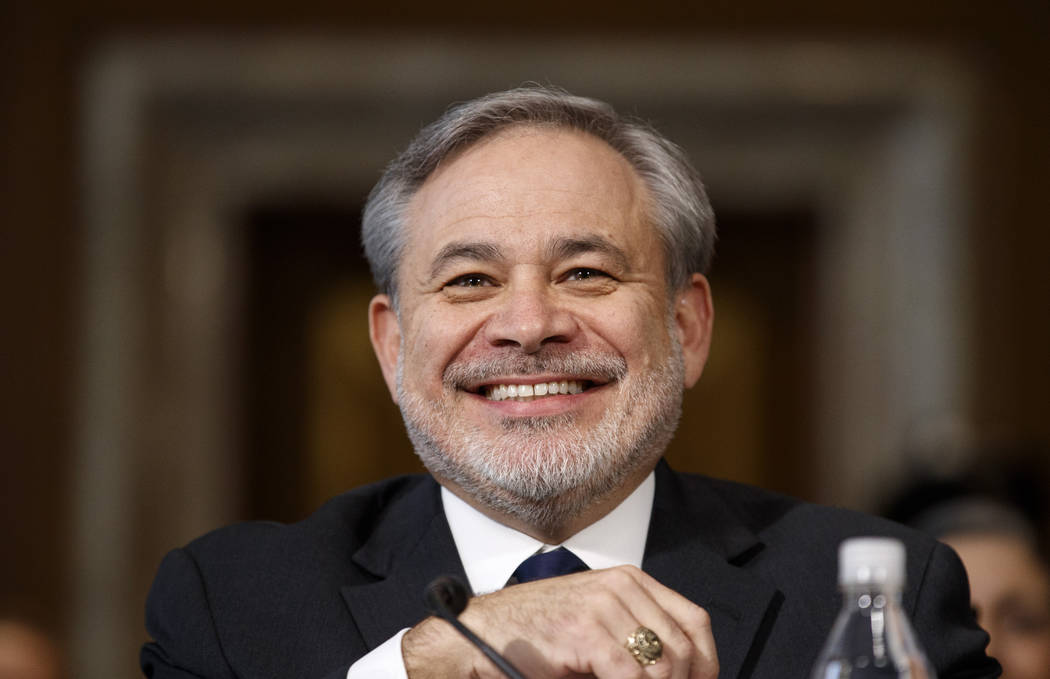 WASHINGTON — Despite assurances about Yucca Mountain and the removal of plutonium secretly shipped to Nevada, the state’s two Democratic senators voted against Dan Brouillette, who was confirmed by the Senate on Monday to be secretary of energy.

“We are very fortunate to have someone of his caliber and his experience,” said Sen. Lamar Alexander, R-Tenn., the chairman of the Senate Appropriations subcommittee on energy.

The Senate voted 70-15 to confirm Brouillette, with only Democrats opposed to the nominee who was selected by President Donald Trump to replace outgoing Energy Secretary Rick Perry.

Sens. Catherine Cortez Masto and Jacky Rosen of Nevada both voted against the nomination, despite winning assurances from Brouillette that he would abide by an agreement between Perry and Cortez Masto to begin moving a half ton of weapons grade plutonium from the state in 2021.

Brouillette also assured Cortez Masto during a Senate Energy and Natural Resources Committee hearing that he would only spend funds directed by Congress to revive the licensing hearings on the department’s application to build a nuclear waste repository at Yucca Mountain.

Vote of no confidence

For the Nevada lawmakers, the opposition to the nomination was more a vote of no confidence with the Trump administration and the Energy Department, which has pushed to revive the Yucca Mountain project and store weapons grade plutonium storage at the Nevada Nuclear Security Site.

Cortez Masto was one of four Democrats who voted against Brouillette, 16-4, when the committee moved his nomination to the full Senate earlier this month. She said her vote was out of concern for the relationship between Energy and Nevada.

“I hope that relationship improves and that nothing new shocks the Silver State,” she said.

Brouillette served as deputy energy secretary prior to being tapped for the top post after Perry announced he would step down amid a widening congressional investigation into Trump administration policy in Ukraine.

Perry was identified by State Department witnesses as one of several Trump loyalists involved in trying to arrange a White House meeting for Volodymyr Zelenskiy, the Ukrainian president who was urged by Trump to launch an investigation into political rival Joe Biden and his son, Hunter.

The president’s request for the Biden investigation is the focus of impeachment hearings held by the House Intelligence Committee. Perry was never accused of any wrongdoing.

Brouillette’s nomination, meanwhile, was met with bipartisan support in the Senate where Chairman Lisa Murkowski, R-Alaska, and Sen. Joe Manchin of West Virginia, the ranking Democrat on the Energy and Natural Resources Committee.

“He’s made a good impression on just about everyone,” Murkowski said.

“He is the right person at the right time for this job,” Manchin said.

Brouillette is a former executive who served at Ford Motor Co. and USAA, the insurance giant.

He was confirmed as deputy secretary with a bipartisan 79-17 Senate vote in 2017.

Brouillette also won Senate confirmation to serve in the Energy Department during the George W. Bush administration, which pushed for licensing of Yucca Mountain as the nation’s sole nuclear waste repository.

But that embrace of Yucca Mountain as a permanent repository for the nation’s radioactive waste from nuclear power plants left Nevada lawmakers skeptical of his nomination to head the Energy Department.

And state relations with the Energy Department have soured under Perry with the shipment of a half ton of plutonium to Nevada last year, under federal court order, as the state was preparing a lawsuit to block the material.

The Energy Department didn’t notify Nevada that the plutonium was in the state until after it filed a federal lawsuit seeking an injunction to block the shipment.

Cortez Masto later won concessions from Perry to begin moving the plutonium out of the state in 2021, an earlier time frame than Energy had planned to transfer the material to Los Alamos Laboratory in New Mexico.

Brouillette assured Cortez Masto he would abide by the agreement the senator struck with Perry.

“I will give you a firm commitment that we will honor that agreement,” Brouillette told Cortez Masto during the hearing this month.

Cortez Masto also peppered Brouillette on Yucca Mountain. He replied to her questions in the same manner that Perry had in the past, noting that Congress approved the location as the sole site for nuclear waste disposal from power plants.

Until Congress changes the law, Brouillette said he and the Energy Department are bound to follow it.

But, Brouillette the Energy Department would not spend funds on Yucca Mountain that had not been first directed by Congress.