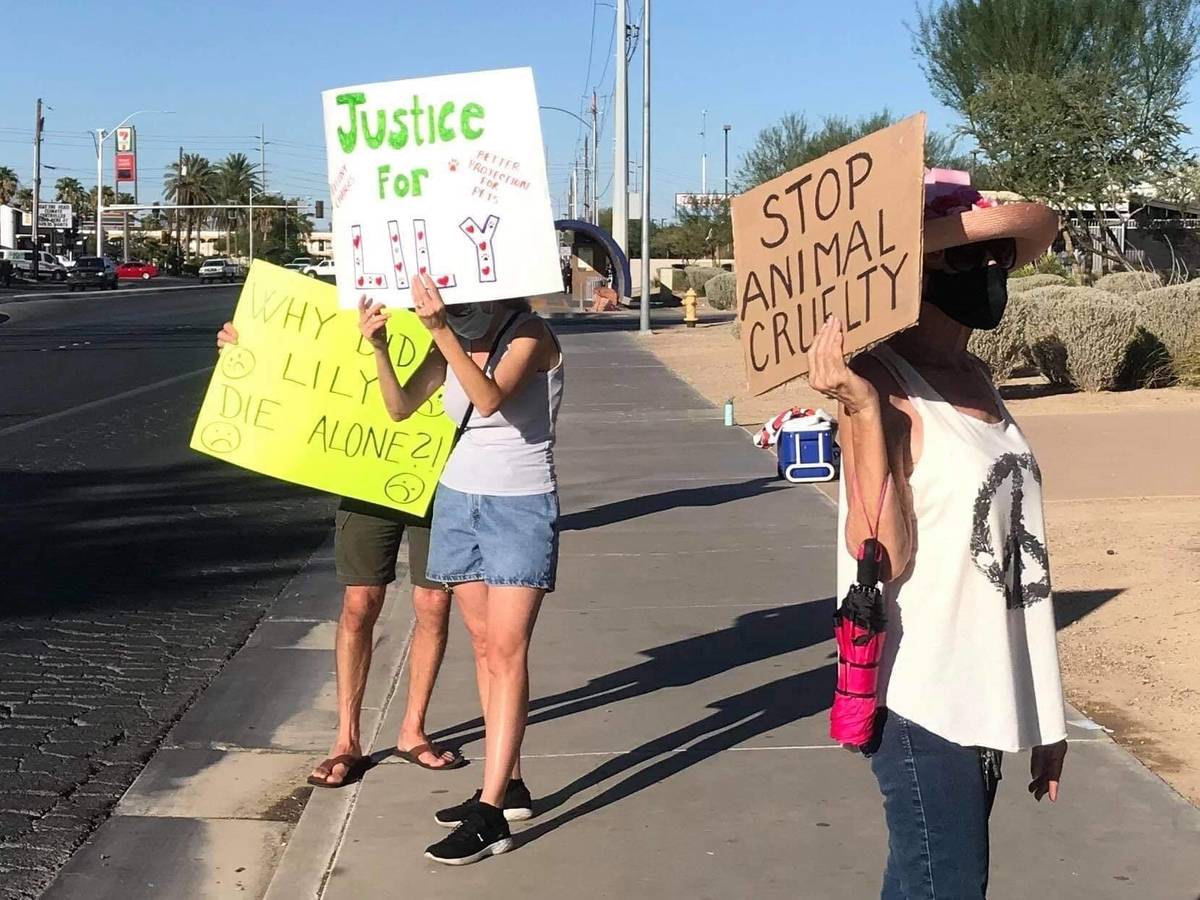 Protesters were in front of North Las Vegas City Hall on Wednesday to ask for felony charges against an owner who they say neglected to properly care for their dog. (Nevada Voters for Animals)

Advocates are trying to strengthen animal cruelty ordinances in North Las Vegas after a resident said they saw a dog apparently die from heat exposure while it was lying in direct sunlight.

A petition for justice for the dog named Lily says it was tied to the end of a chain outside and was distressed from the heat. It has more than 21,000 signatures.

A video on the Nevada Voters for Animals Facebook page shows the dog lying partly under the sun with its mouth open and making sudden movements. On Wednesday, the group protested outside North Las Vegas City Hall during a virtual City Council meeting, asking for felony charges against the owners.

Advocates are in talks with the city to strengthen animal abuse ordinances to protect animals, Gina Greisen, a Las Vegas animal activist and president of Nevada Voters for Animals, said during the meeting.

“The other thing we ask is that you please, please put resources into animal control,” she said. “These are the front line positions that go and look at abuse, neglect — not only of animals, but of people.”

The group declined to identify the owner of the dog when asked by the Review-Journal.

A statement from Councilman Richard Cherchio says the city is waiting on several pieces of evidence, including the results of a necropsy.

“Regardless of the outcome, over the course of this investigation and through the tireless efforts of the Nevada Voters for Animals, it has become clear to me that more tools are needed, like updated ordinances, to better protect our four-legged friends,” he said in the statement. “Work has already started on those updates, and we are committed to collaborating with advocates and other stakeholders to address animal issues in our community.”

When asked for comment, North Las Vegas spokesman Alexander Cuevas said in an email the investigation into the matter is ongoing, and the police department cannot further comment. A police report of the incident was not immediately available.

At the meeting, Greisen criticized the time it took for animal control and police officers to arrive at the dog’s home.

A neighbor called dispatch and said it took an hour and a half for animal control and police to respond, and all the owner did to cool off the dog was hose it off and move a trampoline over the body, according to the petition.

“You’re not a premier city if you allow this to happen in your city,” Greisen said in an interview.