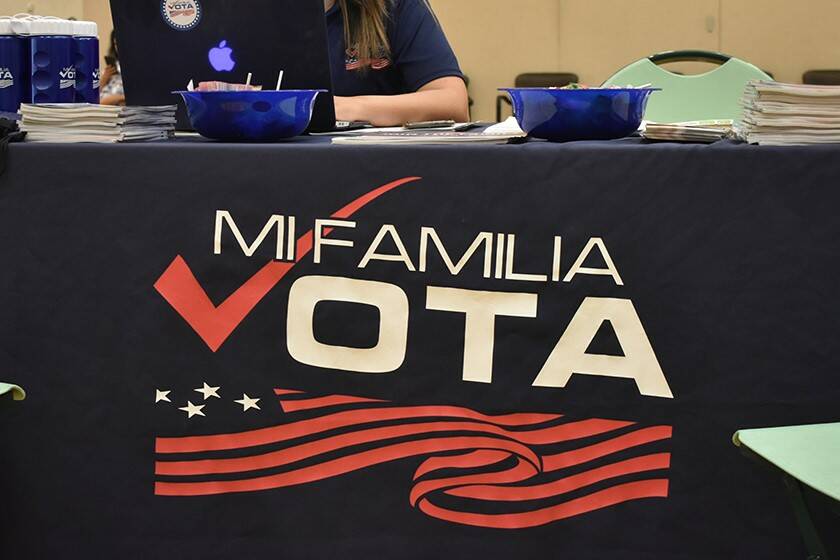 Nearly all the Las Vegas staffers for Mi Familia Vota, a prominent advocacy group for Latino communities, resigned this week, a public airing of a major rift between the group’s local and national leaders, sources told the Las Vegas Review-Journal.

After an interim state director of the organization’s Nevada chapter allegedly berated two undocumented employees who quit on Wednesday, 19 other staffers resigned in protest, according to a source with direct knowledge of the situation.

“This is something you would expect from a Trump supporter, not a progressive organization, and that’s what is really disturbing about all of this,” said another source close to the organization.

Ramirez on Friday hung up on a Review-Journal reporter calling to request comment on the allegations, but then texted an email for the national Mi Famila Vota’s media representatives.

That source said the Ramirez had planned to fire the first two staffers before they preemptively quit.

In response to the exchange between Ramirez and the two outgoing employees, a staffer resigned in solidarity on Wednesday. Another 18 staffers resigned a day later, leaving the organization’s Nevada chapter with only two employees, not including Ramirez, a source said.

Mi Familia Vota’s national office disputed that the majority of employees quit, saying that most are staying with the branch. It also said there are 39 workers in the Las Vegas office.

The organization’s national office offered its own version of events in a Friday statement.

“At no time did Mi Familia Vota threaten to, or call, law enforcement,” the national office said in its statement.

Instead, Ramirez threatened to call security because an employee had “become unruly and exhibited threatening behavior” at the Las Vegas office, the statement reads.

The national office for the organization also said that it had launched an investigation last month into practices by former managers in the Las Vegas office and both had resigned, but that it could not comment any further because the probe was ongoing.

Staffers who resigned Thursday wrote in a letter that they were “tired of the toxic and disgusting actions done by the national leadership” of the organization, according to an email obtained by the Las Vegas Review-Journal.

“Yesterday, we witnessed our supervisor being yelled at for about two hours and then being threatened to have the cops called on her after she was let go,” the staffers wrote. “Mi Familia Vota is an organization that is intended to protect our immigrant community and serve it.

The Review-Journal reported in November that the Metropolitan Police Department had an informal agreement with Immigration and Customs Enforcement to turn over undocumented immigrants who had been arrested for allegedly committing non-violent crimes.

“This incident is only one example of the hostile, toxic, and degrading work environment that has been created at Mi Familia Vota,” the letter continued. “We are sad to see an organization to which we have dedicated our time to behave this way. It is clear things will not change so we are writing this letter to simply ask Mi Familia Vota to have the human decency to pay us until the end of the month, which is December 31st.”

In another email from Thursday obtained by the Review-Journal, the Nevada Immigrant Coalition steering committee informed Mi Familia Vota’s national leaders that it was formally expelling the organization from its group. The committee is made up of the Progressive Leadership Alliance of Nevada, Culinary Union and Make the Road Nevada.

“While we have enjoyed working with previous State Directors and MFV staff based locally in Nevada, it has become clear based on MFV actions, MFV no longer aligns with the NIC values and mission,” the email states. “We hope that in future, MFV can reassess priorities, practices and structure and one day rejoin the NIC.”

In a second statement Friday, Mi Familia Vota said it has the “utmost respect” for the coalition. It also said it was actively reaching out to all of its partners to “clarify the erroneous and harmful reports circulating.”

“We look forward to getting community stakeholders the facts and getting back to all of our aligned missions: serving the Latino and immigrant community and continuing building political power to have a more inclusive democracy,” Mi Familia Vota said.

Mi Familia Vota is an important turnout machine for Democrats in Latino communities, and the tension within the Nevada office comes as Democrats face political headwinds going into the 2022 midterm elections, when the party that controls the White House usually loses seats in Congress. Nevada is also a key state Republicans are targeting to flip control of the U.S. Senate.

Mi Familia Vota operates in six states including California, Texas, Florida and Arizona, where it is headquartered. It focuses on promoting social and economic justice for Latino communities and it is influential in elections, championing voter registration and participation.