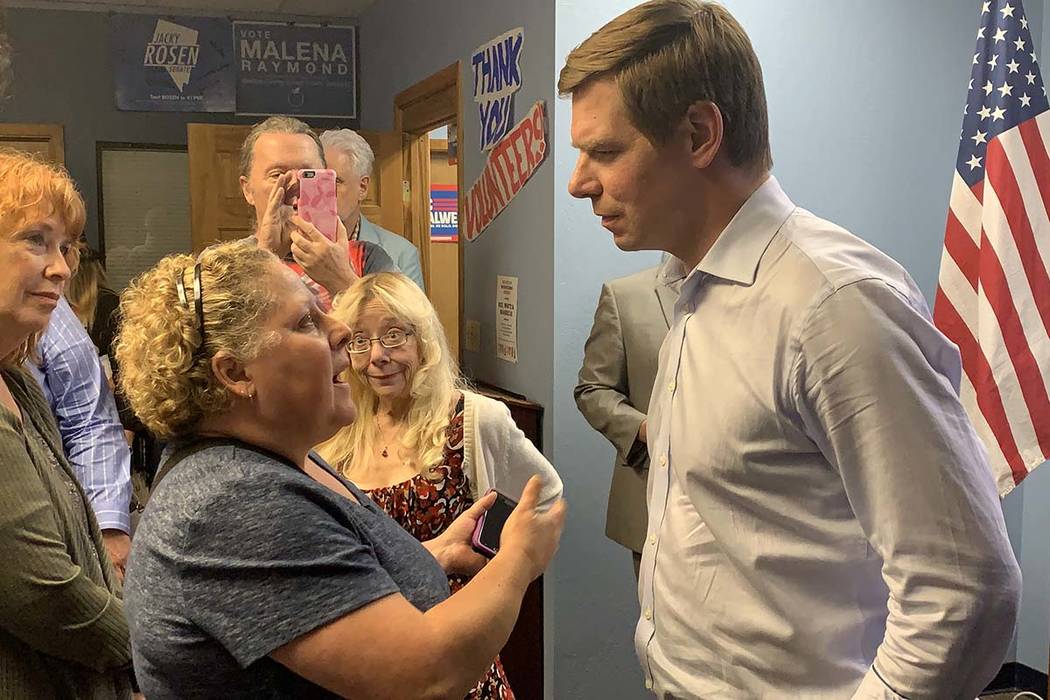 California Rep. Eric Swalwell speaks to an audience member after addressing a gathering of Washoe County Democrats in Reno Monday on his second official visit to Nevada as a presidential candidate. May 6, 2019. (Bill Dentzer/Las Vegas Review-Journal) 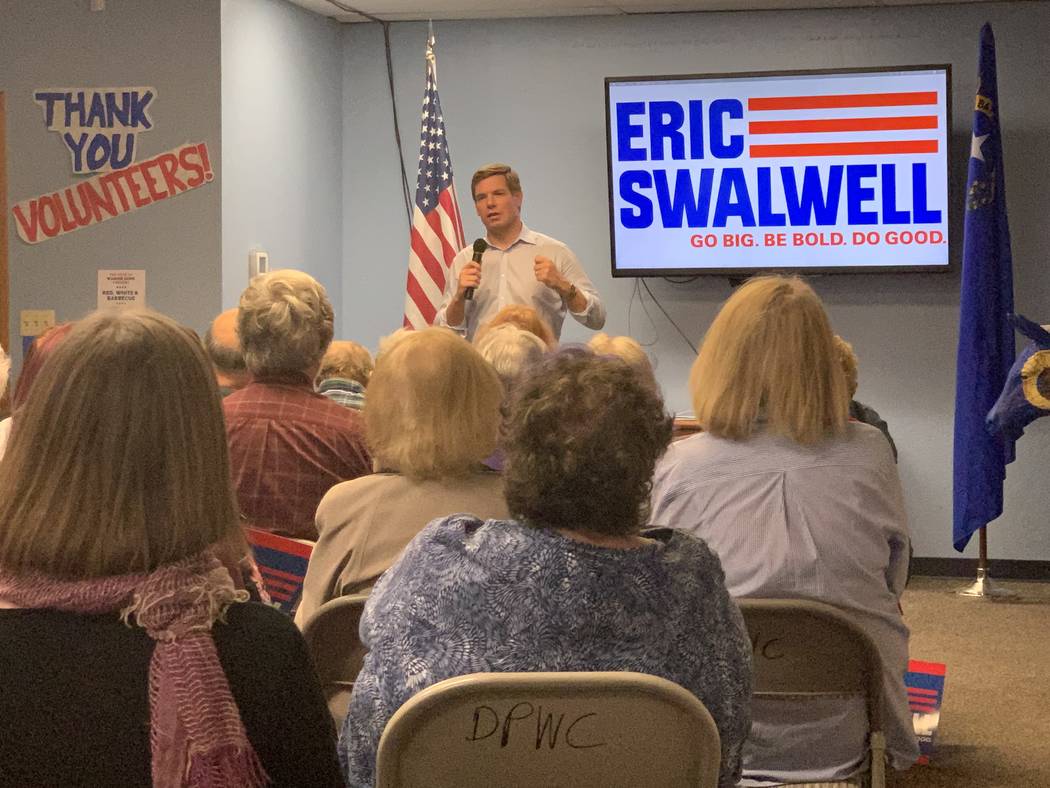 California Rep. Eric Swalwell speaking to a gathering of Washoe County Democrats in Reno Monday on his second official visit to Nevada as a presidential candidate. May 6, 2019. (Bill Dentzer/Las Vegas Review-Journal) 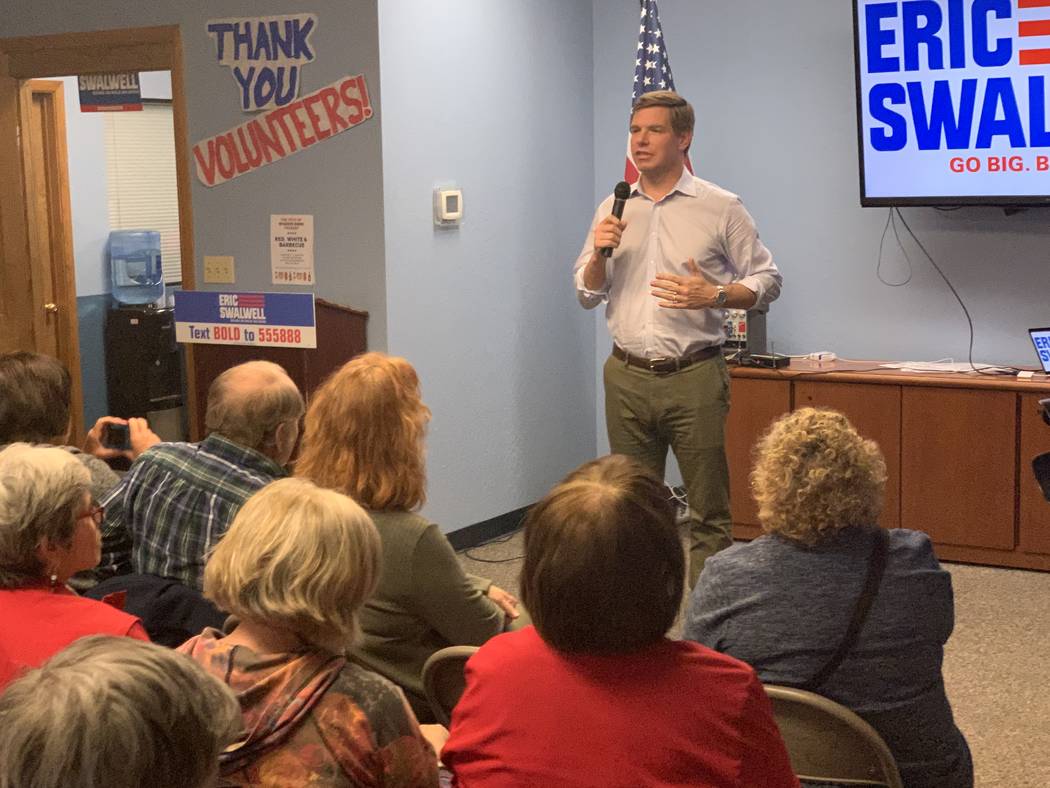 California Rep. Eric Swalwell attacked President Trump and other Republicans as he spoke to a gathering of Washoe County Democrats in Reno Monday on his second official visit to Nevada as a presidential candidate. May 6, 2019. (Bill Dentzer/Las Vegas Review-Journal)

That is, bridge divides with congressional Republicans whom Democrats can’t manage to defeat in 2020.

Republicans, he said, tell him they are paralyzed by President Donald Trump and his ability to dominate the public debate on Twitter, unable to disavow him for fear of retaliation.

“They’re scared,” he told an audience of about 60 in party headquarters. “They’re scared about losing jobs. So we should just make it easy for them and take their jobs.”

The campaign stop was Swalwell’s second visit to the state since he announced his candidacy. The 38-year-old, four-term representative, who represents the eastern edge of the San Francisco Bay Area, spoke and answered questions for about an hour.

He is the fifth Democratic presidential hopeful to pass through the area in the past month.

Though he has staked out gun control as his main issue — and did so again in comments Monday — Swalwell ran the gamut of Democratic and progressive priorities and talking points.

He touched on plans to reduce military spending; address climate change by signing the U.S. back on to the Paris climate accord and supporting the Green New Deal; change the tax code to strengthen Social Security and fund his health care proposals, including a public option often termed “Medicare for All;” and fund a trillion-dollar infrastructure plan that would include modernizing schools and bringing broadband to rural areas in addition to road and bridge repairs.

Swalwell got his biggest crowd reaction when he attacked Trump and other Republicans, repeating a call he first made last week to impeach Attorney General William Barr, whom he accused of lying to Congress.

He said he also favors reversing the Department of Justice’s stance on not indicting a sitting president.

“So when I think about this president, if we don’t start showing that there’s consequences for this lawlessness, he’s going to keep doing it,” Swalwell said. “And future presidents will think that the standard of conduct has been lowered.”

In response to an audience question, he said he supported restoring a felon’s voting rights upon release from prison, adding that he also backed criminal justice reforms that put fewer people in prison to begin with and legalization of marijuana.

Swalwell also included a few comments on foreign policy and international relations, attacking the current administration’s jettisoning of and disregard for strategic alliances. He said he was a strong backer of Israel but said the U.S. should restore funding the Palestinian state and support a two-state solution in the Middle East.