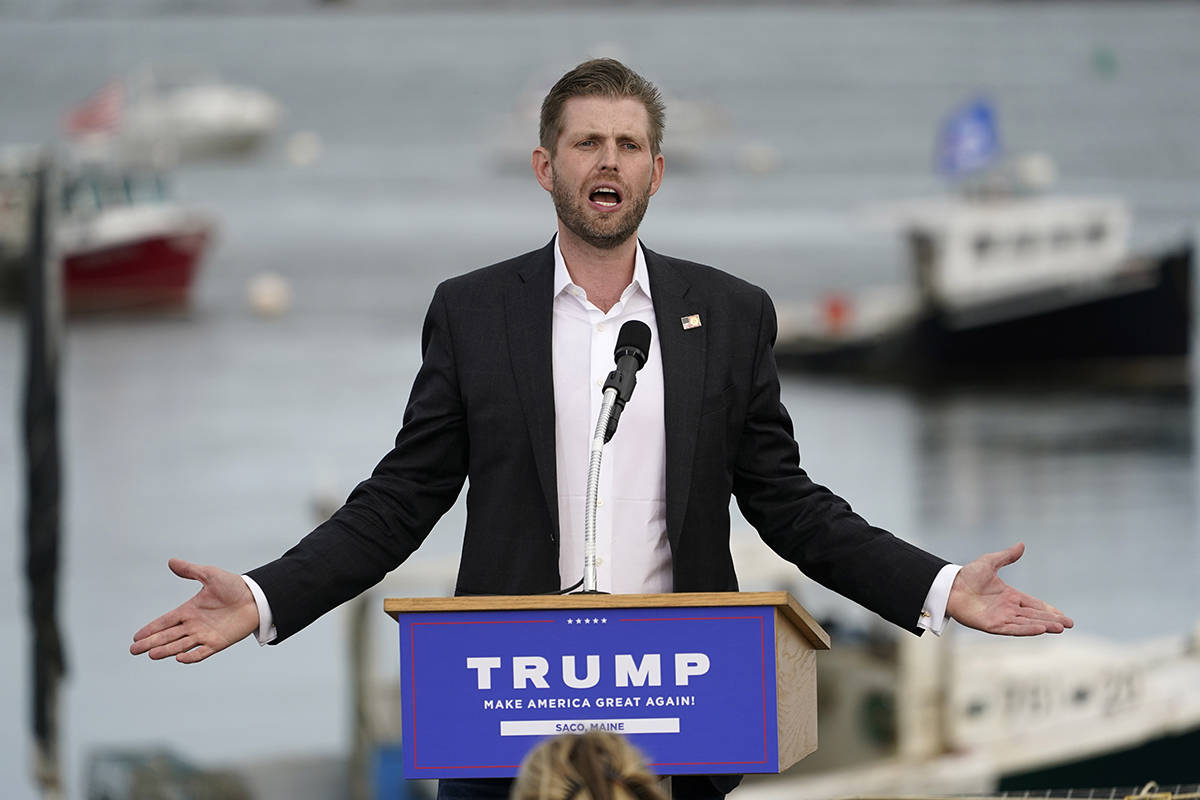 During a campaign swing through Las Vegas on Thursday, Eric Trump, son of President Donald Trump, addressed the president’s recent refusal to commit to a peaceful transfer of power should he lose the upcoming election, saying his father is only pressing for a fair contest and would concede to Democratic nominee Joe Biden should Biden be the clear victor.

Trump referenced a recent interview given by former Secretary of State Hillary Clinton to Showtime’s “The Circus” in which the 2016 Democratic nominee advised Biden not to concede to Trump “under any circumstances” because of the possibility of Trump contesting the results.

“I think my father’s saying the same thing: I’ll have to look at what happens,” Trump said.

Trump said if “tens of thousands of ballots are found in a dumpster” or some similar case of fraud, his father would obviously contest the results.

“I think my father’s just saying listen, if he got blown out of the water, of course he’d concede,” Trump said. “If he thought there was massive fraud, then he’d go and try and address that.”

When told there is a lack of evidence of voter fraud in mail ballots, Trump pushed back, citing an August story out of Patterson, New Jersey, in which a new election had to be called after allegations of fraud in the all-mail contest.

During his brief remarks to a few dozen campaign supporters assembled at the campaign office for a phone bank, Trump said Democrats “are going to cheat” in the election and pushed for the supporters to volunteer on Election Day to monitor the polls.

Trump was scheduled to host an outdoor rally at Pahrump Valley Winery during the evening. He told his father’s supporters that Gov. Steve Sisolak was trying to block the rally — a familiar refrain echoed at previous Nevada campaign rallies featuring the president and his pastor, Paula White. (Sisolak has placed a 50-person limit on public gatherings as part of mitigation efforts during the COVID-19 pandemic.)

Trump said “no one cared” about the large protest held on The Strip Wednesday evening, but any Republican event is met with opposition from the state. When asked how he knew this, Trump said the governor’s office had called both the campaign and the venue to threaten a shutdown.

“The governor’s office had no involvement or communication with the event organizers or hosts of the campaign event,” spokeswoman Meghin Delaney said.

Delaney added that state and local regulatory bodies and enforcement agencies are the ones who handle compliance. Hosts for previous Trump campaign rallies have been cited by local governments and the state’s Occupational Safety & Health Administration (OSHA).

Nye County Spokesman Arnold Knightly said the sheriff’s office and Department of Emergency Management had been working to figure out what COVID-19 mitigation efforts were planned and had not, as of Thursday afternoon, received such plans.

He said there have been no efforts by the county to shut the event down.

OSHA confirmed that the Division of Industrial Relations was aware of the event but declined to comment further.

Trump was asked whether the campaign made the conscious decision to host an outdoor event, after the president’s indoor Henderson rally was condemned by some as a health risk. He said the decision to hold it outdoors was made because no indoor venue in Pahrump was large enough to hold the crowd expected.

He bristled when asked why he was not wearing a mask during the visit, saying it is hard to communicate with reporters and speak to a group with a mask. He said he gets tested every second day, kept plenty of distance between himself and people at the event and was not worried about contracting the virus.

“Eric Trump’s campaign stop is another desperate attempt to distract from the Trump administration’s ineffective pandemic response, failing economy and long record of attempting to rip away health care coverage from Nevada families,” McCurdy said in a statement.

During his talks with volunteers, Trump blasted Democrats as “anti-religion and anti-family” and criticized Biden for not condemning “looting and rioting” across the country and seeking to raise taxes by $4 trillion.

“I was here in 2016,” Trump said, “and I can tell you (support for the president) is far greater than it was in 2016. People are seeing the Democratic Party for who they are. They’re totally fine with this madness.”

Trump stressed his love for the Las Vegas community, saying he got to know it very well during the building of Trump International Hotel.

Local Latino support for the president is higher than it has ever been, Eric Trump said, as the Democratic Party has moved closer to things like socialized medicine and massive tax increases, which he said many immigrants have fled Latin America to escape.

As he worked the room and posed for pictures, one volunteer asked Trump if he planned to run for president.