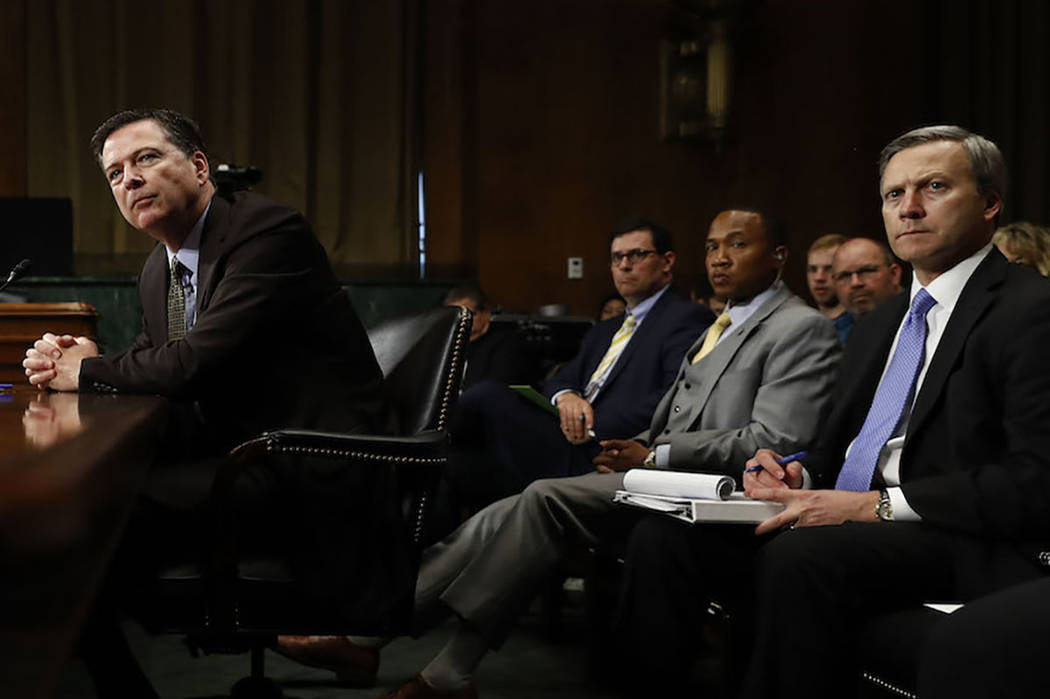 Greg Brower, right, who was sanctioned for sex discrimination while he headed the U.S. Attorney's office in Las Vegas, listens to ex-FBI Director James Comey as he testifies at a Congressional hearing in May. (Senate Judiciary Committee) 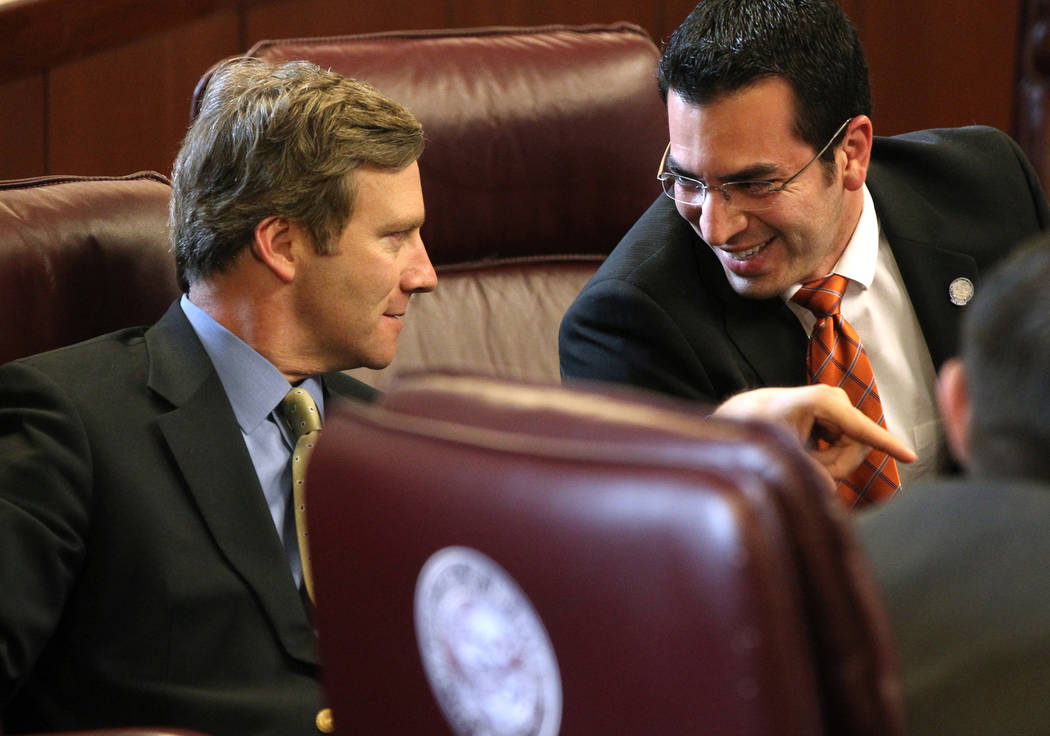 Greg Brower, left, a former Republican state senator from Reno, talks to Ruben Kihuen, D-Las Vegas, in 2011. Brower has come under fire in a sex discrimination case when he led the U.S. Attorney's office in Las Vegas in 2008-2009. (AP Photo/Cathleen Allison)

Brower, assistant director of the FBI’s Office of Congressional Affairs in Washington, D.C., was cited for misconduct in a rare U.S. Equal Employment Opportunity Commission decision issued May 19.

The eight-page decision, obtained by the Las Vegas Review-Journal, concluded that a former female prosecutor was subjected to sex discrimination and retaliation while Brower headed the U.S. attorney’s office between January 2008 and October 2009.

The EEOC upheld an administrative judge’s opinion that Brower had displayed a “hostile” attitude toward the prosecutor in January 2009 after she complained about sexist remarks her white collar crime supervisor had made. The office was criticized for being slow to transfer the prosecutor after she reported her discrimination claims.

One of the managers informed of the allegations was Brower’s top assistant at the time, Steven Myhre, who is now the acting U.S. attorney in the office.

“While acts of discrimination and retaliation are no doubt common within the federal service, it is extremely rare to see such a finding against the U.S. attorney’s office, which is charged with upholding the laws of this country,” said Las Vegas attorney Adam Levine, who has represented clients in the federal equal employment opportunity process. “If any agency should be aware of the prohibition against retaliation, it is the U.S. attorney’s office.”

Brower, a former Republican state senator and assemblyman from Reno, has been thrust into the national spotlight as the FBI’s point man with Congress, which has been holding hearings on Russia’s interference in the 2016 presidential election and possible collusion with the Trump administration. He was originally hired by former FBI Director James Comey as a deputy counsel last year. Comey was fired by President Donald Trump in May, two months after promoting Brower to his current administrative position.

In EEOC documents, the former prosecutor alleged that her immediate supervisor, Assistant U.S. Attorney Daniel Schiess, was prejudiced against women, especially mothers of small children, and had “disparaged her life choices.”

Schiess, one of the most skilled and experienced prosecutors in the office, was promoted from head of the white collar crime group to criminal chief after the complaining prosecutor left the office and while the EEOC case was still open. But he was replaced by veteran Assistant U.S. Attorney Andrew Duncan in the wake of the commission’s decision.

Trisha Young, a spokeswoman for the U.S. attorney’s office, denied a request to interview Schiess and Myhre and said the office does not comment on “personnel matters.”

■ The Justice Department to pay the former prosecutor a total of $287,998 in legal fees, costs and damages.

■ Brower and other managers tied to the case to undergo anti-sex discrimination and retaliation training.

■ The U.S. attorney’s office to post the order explaining the commission findings and submit a compliance report.

The administrative judge awarded the prosecutor $33,000 in damages for pain and suffering, EEOC records show.

The judge concluded that the prosecutor felt that she “had been punched in the gut” and was afraid that her career had been permanently damaged.

It is unclear whether Brower faces discipline over the EEOC’s findings now that he is back with the Justice Department.

Dexter Brooks, associate director of the commission’s Office of Federal Operations in Washington, said he can’t cite any case law, but he sees “nothing precluding” a government agency from disciplining a manager who left and then returned.

Brooks said only about 1 percent of the federal employees alleging discrimination end up going through the formal process with the EEOC.

“As the model employer, federal executive branch agencies should be rooting out discrimination at the lowest level possible,” Brooks said. “It should be rare that they need a third party intervention.”

One former prosecutor in the U.S. attorney’s office, Paul Padda, said the EEOC’s decision raises questions about the fairness of the office.

“If the U.S. attorney’s office is violating the civil rights of its own employees by engaging in intentional discrimination, then it’s unlikely they’re going to respect the constitutional rights of criminal defendants,” he said.

Padda, who recently won a $160 million civil verdict in state court, said he has been a witness for other office employees who have filed grievances against management, including sexual harassment, but he declined to elaborate.

“I became an assistant United States attorney believing in the principles that the Department of Justice is supposed to stand for, and it was obvious to me that I no longer fit in with the management of the office,” said Bliss, who left for private practice.

The EEOC decision did not disclose any names. The Review-Journal uncovered the identities of the supervisors through the dates of the alleged misconduct and their job descriptions laid out in the decision.

EEOC records show that his office challenged the administrative judge’s July 2013 findings that sex discrimination had occurred in the office, but he supported conclusions that Brower had retaliated.

On Jan. 21, 2009, roughly two weeks after the complainant asked to report to another supervisor, Brower told her in a meeting that “she had made a mistake” raising the allegations, EEOC records show.

He said she had “lost all credibility” with him and the rest of the office because an internal investigation did not substantiate her allegations.

Schiess originally denied the prosecutor’s request for a transfer “so that people in the office would not think that there was any validity” to her claims, the judge found.

Marsh, “higher-level” managers and the U.S. attorney’s own internal investigators all disagreed with Schiess, but his opinion prevailed, resulting in the denial of her transfer for two weeks, records show.

Schiess privately admitted to his supervisors that he made some missteps, documents show. He also admitted that he told the prosecutor in the past “that she should stay at home with her kids,” but the prosecutor took his words out of context.

An initial memo by the U.S. attorney’s office falsely stated that an internal investigation found no evidence to back up her claims, the administrative judge found. The office eventually abandoned that position.

Despite her ultimate transfer, the former prosecutor filed a formal complaint with the EEOC in March 2009. Some of her claims of discrimination, which dated back to 2002, were dismissed because they were not timely, records show.

But a claim that she was denied time off in retaliation for reporting her allegations was among those upheld.

Records show the administrative judge criticized the U.S. attorney’s office several times for not providing documents prior to an August 2011 hearing in the case and sanctioned the office for it.

Withholding the documents until the third day of the hearing prevented several witnesses from being questioned under oath about the contents of the documents, the judge found.