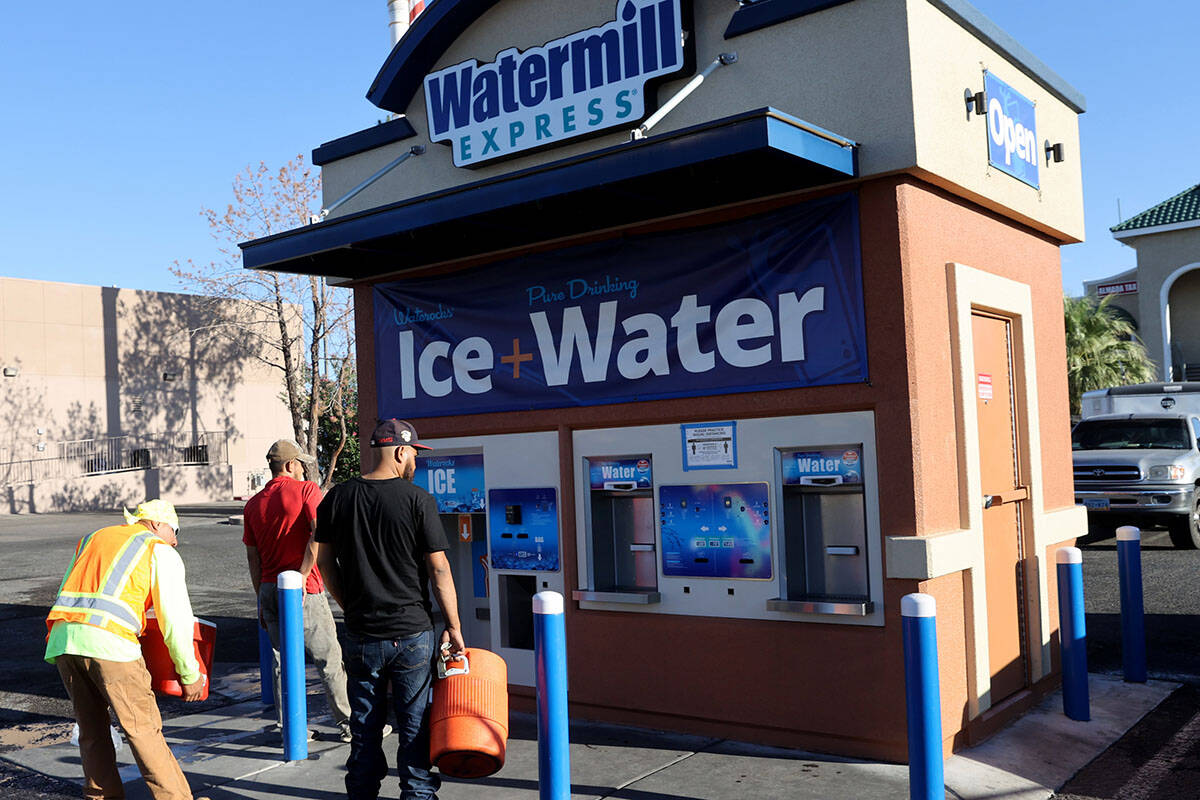 Workers line up for ice at a kiosk on the corner of Smoke Ranch Road and Jones Boulevard in Las Vegas Friday, July 10, 2020. (K.M. Cannon/Las Vegas Review-Journal) @KMCannonPhoto 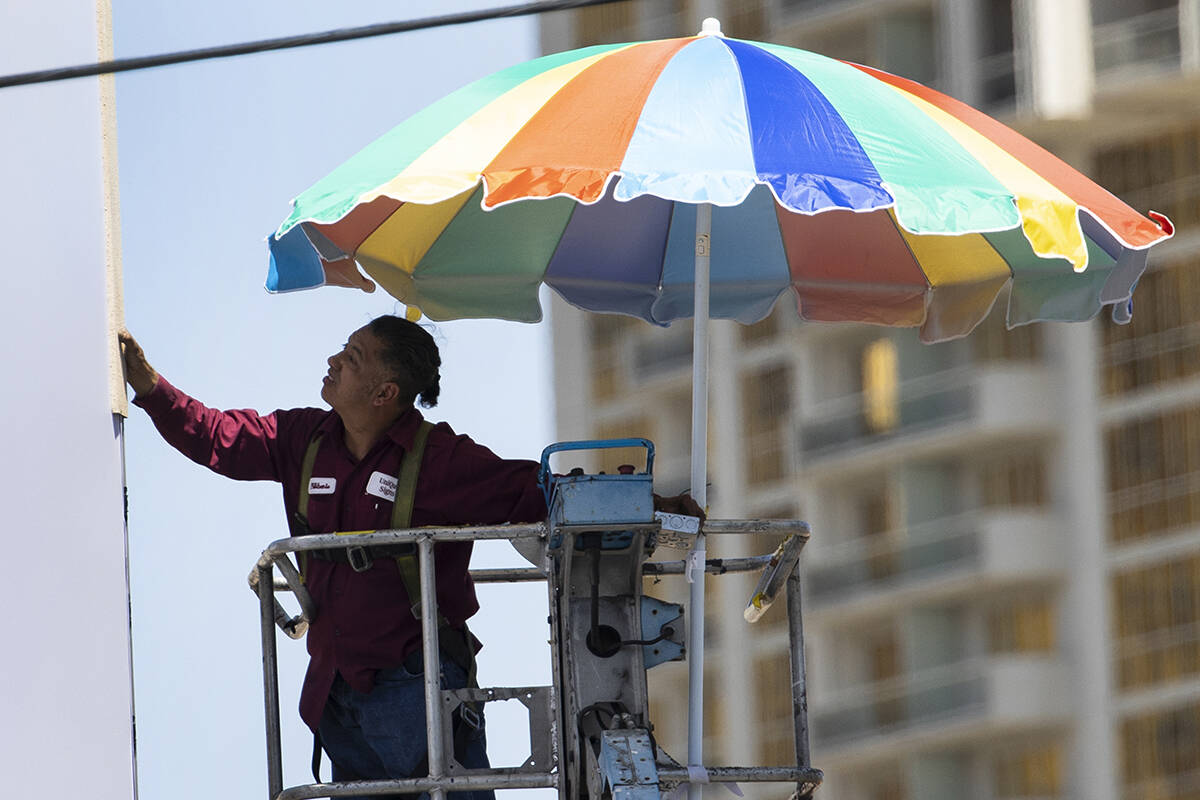 A worker uses a giant umbrella to protect himself from sun as he works on an outdoor advertising structure on the strip, on Wednesday, July 7, 2021, in Las Vegas. (Bizuayehu Tesfaye/Las Vegas Review-Journal) @bizutesfaye 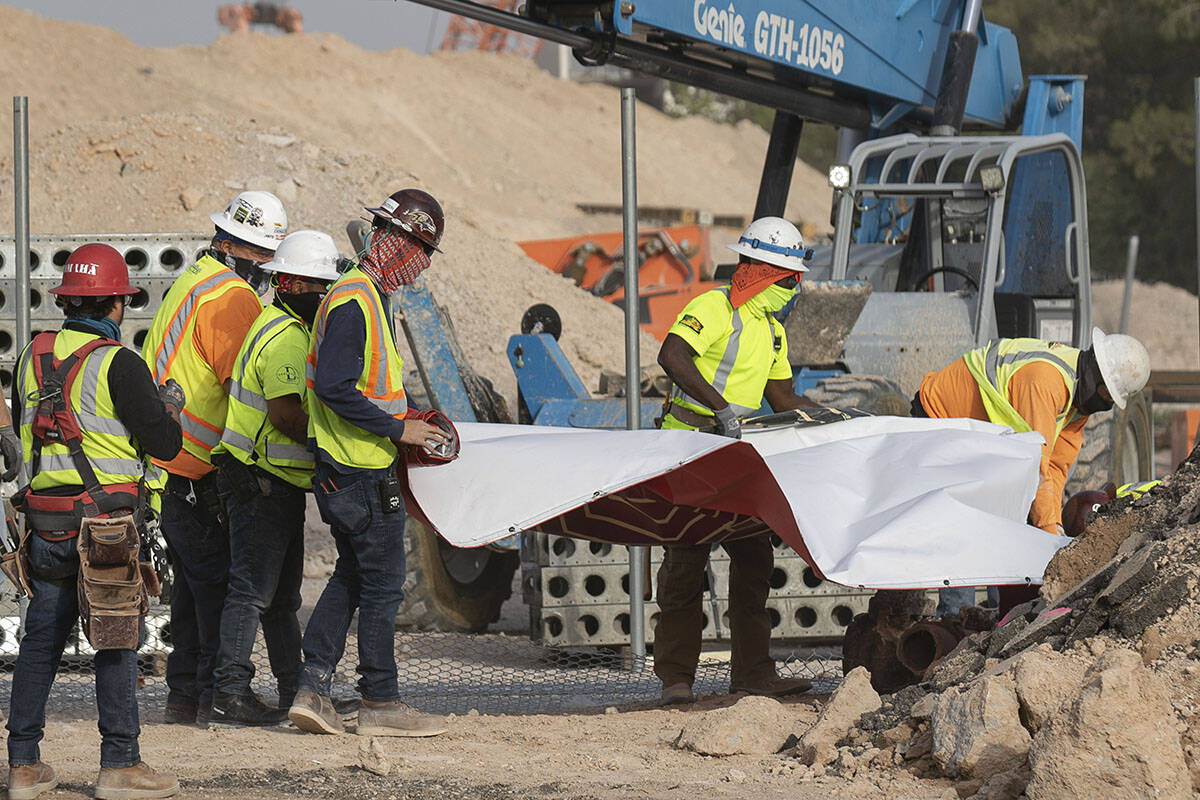 Biden cited catastrophic weather events like wildfires and hurricanes as proof that climate change and extreme heat are increasing health risks to workers and vulnerable communities.

But the governmentwide proposals to protect workers from extreme heat are expected to be met by opposition from business groups, even though Nevada employers are already required to meet guidelines.

“Many employers are already doing this,” said Jody Florence, a partner with Kamer Zucker Abbott, a Las Vegas law firm that represents employers. “Protection from heat has always been an employer’s responsibility.”

But Florence said employers could be exposed to more fines and penalties, depending on how the final regulations are written. And costs of implementing extra protections would fall on employers, she said.

About 180 Las Vegas business and community leaders were in Washington this week to lobby for projects and funding when the Biden proposals were announced. Those business leaders are wary of new regulations at a time when Nevada unemployment is at 7.7 percent, the highest in the nation, because of the pandemic.

“Some of these regulations are onerous,” she said. “We have to strike a balance.”

Marc Freedman, U.S. Chamber of Commerce vice president for workplace policy, said the new rules will be difficult to write.

“Heat is a very challenging hazard to regulate since there is no common threshold of risk and employees react differently to exposure,” he said in a statement.

But Labor Secretary Mary Walsh said this week that “my priority is to make sure we are taking appropriate action to keep workers healthy and safe on the job.”

The proposals include developing workplace heat standards and increased enforcement, use of cooling centers in communities and creating a heat and health tracking center within the Centers for Disease Control and Prevention.

Proposed new labor protections for workers in extreme heat would help reduce injuries and illnesses from heat exposure that disproportionately affect workers of color, according to the White House.

“Every year, Las Vegas grows hotter and hotter as our planet warms. Every day, working Nevadans brave this extreme heat while on the job,” Martinez said.

She said the new regulations would “protect our working brothers and sisters from the impact of these unprecedented and ever-rising temperatures.”

Florence said her firm wants to see some of the proposals amended and narrowed.

Six federal agencies are expected to implement the initiatives, which could take several years, and include new Occupational Safety and Health Administration regulations for agriculture, construction, warehouse, kitchen and factory workers.

According to the White House, millions of workers are exposed to heat, with Black and Hispanic workers disproportionately exposed to high heat, which also poses higher risks in urban centers to children, seniors and economically disadvantaged groups.

New labor safety standards for workers would be enhanced when temperatures reach 80 degrees. Instead of guidelines on available drinking water, shade and rest breaks, the proposals would become regulations.

In Southwest and Sunbelt states, many federal workplace safety precautions and regulations are already in place, but increased enforcement would ensure those new regulations are followed.

“The U.S. Chamber looks forward to participating in OSHA’s rule making and urges the agency to recognize the unique difficulties with this issue,” Freedman said.