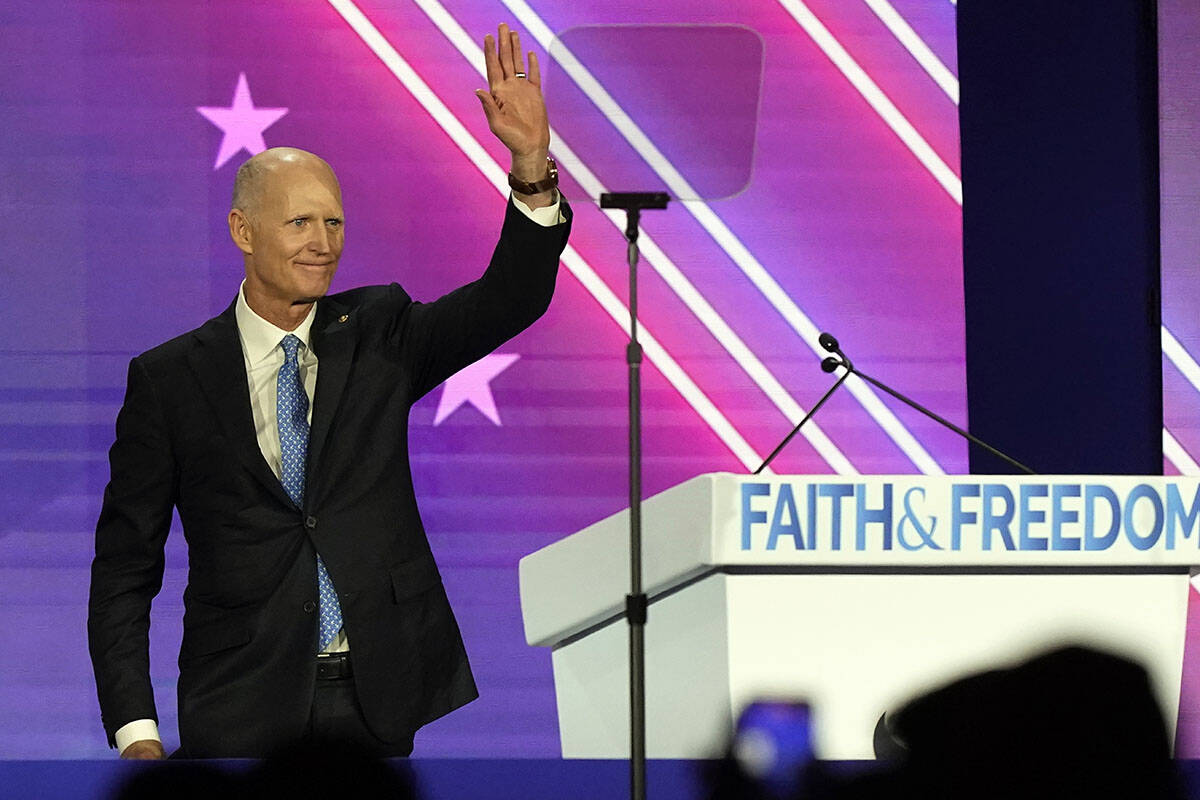 WASHINGTON — Florida U.S. Sen. Rick Scott, chairman of the National Republican Senatorial Committee, predicted Wednesday that the GOP could control the Senate with 54 seats after the midterm elections.

“We have a big opportunity,” Scott said of possible pickups during a question-and-answer session with reporters organized by the Christian Science Monitor.

Laxalt, a former Nevada attorney general, has told media outlets and interviewers that he has a plan to preemptively mount legal challenges over potential voter fraud in the 2022 election.

Asked if the NRSC would fund such challenges, Scott said he didn’t know. “I don’t know anything about filing lawsuits ahead of time,” Scott said. “No one has brought anything up to me.”

But the NRSC chairman did say the committee is organizing lawyers around the country to watch how elections are conducted and to be ready to seek remedies if things appear to be inappropriate.

Scott has disavowed Trump campaign claims of massive voter fraud in the 2020 election and emphasized Wednesday that President Joe Biden was fairly elected. Scott said Jan. 6 rioters should be prosecuted for actions that were disgraceful.

Laxalt assisted Trump campaign legal challenges claiming voter fraud in Nevada in 2020, efforts that were dismissed by judges, election officials and the Republican secretary of state.

Meanwhile, Scott said the Jan. 6 committee hearings are irrelevant to voters and will not sway the upcoming elections. He said the midterm elections would hinge on inflation, rising costs of goods and the lack of baby formula.

There are seven Senate seats, Republican and Democrat, considered competitive in the 2022 cycle.

Two seats are open in states where Republicans are retiring and where Biden won in 2020. Scott said he was optimistic the the GOP would hold those seats, in Pennsylvania and North Carolina.

The GOP is focused on picking up four Democratic seats in Nevada, Georgia, New Hampshire and Arizona.

In Nevada, Cortez Masto has raised more campaign money and enjoys support from the state’s growing Hispanic and Asian communities. She also is supported by the Culinary Union and is part of the political machine of the late Sen. Harry Reid, who hand-picked her as his successor.

Laxalt is the grandson of former Nevada governor and Sen. Paul Laxalt. He is the son of former Sen. Pete Domenici, R-N.M. He was elected Nevada attorney general in 2014, and lost a gubernatorial race in 2018.

The Nevada U.S. Senate race is considered a “Toss Up,” by the nonpartisan The Cook Political Report.

Scott said that in the end, it would be up to individual candidates to win their seats, regardless of endorsements.

The NRSC also is eyeing a potential pickup in Georgia, where U.S. Sen. Raphael Warnock, who won a special election in 2020, faces local and national football star Herschel Walker.

In Arizona, U.S. Sen. Mark Kelly, a former astronaut, will face the winner of a field of Republican candidates.

New Hampshire incumbent U.S. Sen. Maggie Hassan is seen as vulnerable even after the surprise announcement last year by Gov. Chris Sununu, who said he would not seek the Senate seat. Hassan won her last election by a mere 1,000 votes in a state with a Republican bent.

Democrats, meanwhile, have zeroed in on U.S. Sen. Ron Johnson, a Republican in Wisconsin who has broken a term-limit promise to seek a third term.