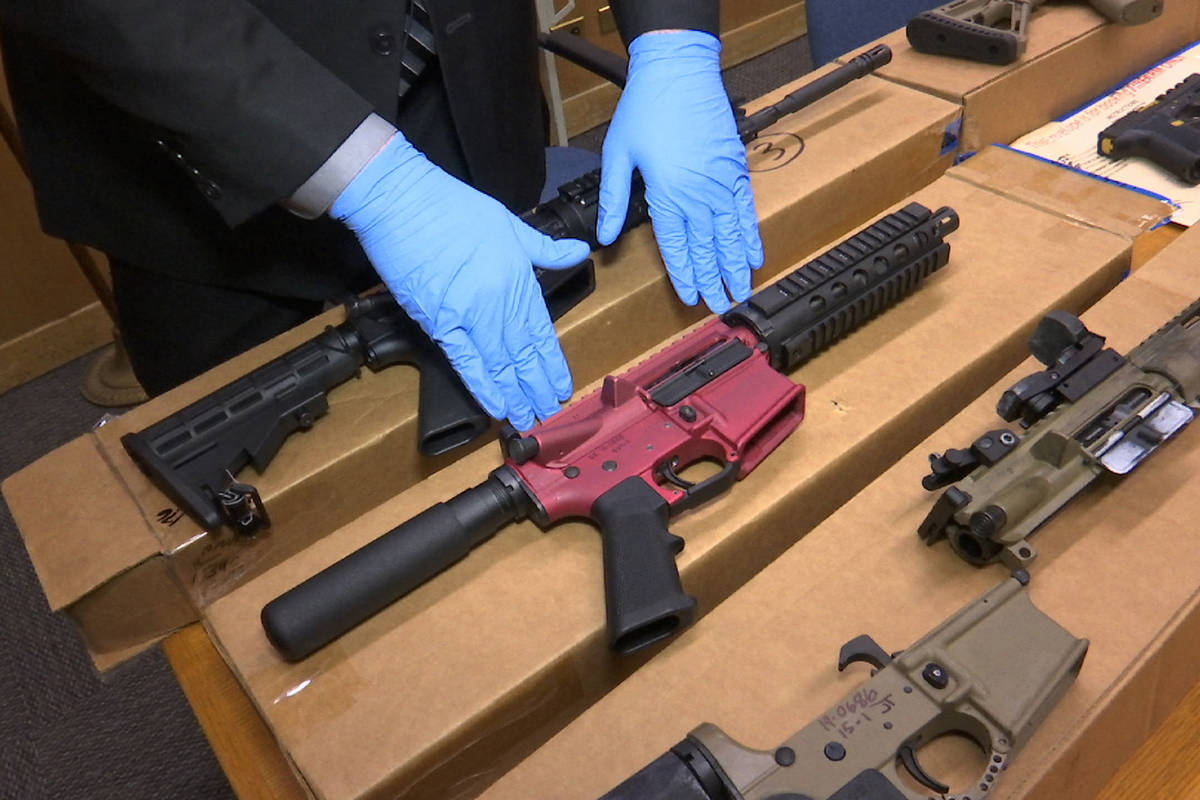 In this file photo taken Wednesday, Nov. 27, 2019, is Sgt. Matthew Elseth with "ghost guns" on display at the headquarters of the San Francisco Police Department in San Francisco. (AP Photo/Haven Daley,File)

CARSON CITY — A Second Amendment rights group has filed a lawsuit challenging Nevada’s recently-passed law that bans the sale, use and ownership of untraceable “ghost guns.”

Filed in federal court in Reno Thursday by the Firearms Policy Coalition and Nevada residents Roger Palmer and Chad Moxley, the lawsuit targets Nevada Assembly Bill 286, claiming the new law prevents people from exercising their Second Amendment rights because it prohibits them from owning self-manufactured firearms.

AB 286 was signed into law by Democratic Gov. Steve Sisolak on Monday after passing the Legislature on party-line votes in both chambers. The new law specifically bans the sale and possession of firearm frames or receivers sold as kits or made with 3D printers.

In their unfinished state, they are not classified as weapons and do not require serial numbers and therefore cannot be traced. Advocates of tighter gun control cite the public safety threat from people who can buy the kits though they may be legally prohibited from owning firearms.

The gun-rights group argues that being able to build your own firearm is a constitutional right.

“In order for a law-abiding individual to exercise their Second Amendment rights, they must have the ability to possess firearms, including those they build themselves. As our complaint explains, the right to self-build one’s own arms has been enjoyed, and at times absolutely necessary, since the founding of our country,” said Adam Kraut, the Firearms Policy Center’s Senior Director of Legal Operations, in a press release Thursday.

Sisolak’s office declined to comment on the lawsuit Friday.

Eight states, including California and Washington, have enacted laws that at least partially address issues with untraceable guns, according to the pro-gun control group Giffords Law Center.

Recently, state and local governments have sued manufacturers of ghost gun kits, including one company in Nevada that has drawn scrutiny from law enforcement.

In December, the Bureau of Alcohol, Tobacco, Firearms and Explosives searched Dayton-based Polymer80, a gun kit maker, on suspicion of evading gun laws by making and selling the kits.

One such kit is advertised as containing “all the necessary components” to build a complete firearm. Despite that, the company “appears not to abide by the rules and regulations governing the sale and disposition of firearms,” according to an ATF affidavit supporting the search warrant application.

Polymer80 was also sued this year by the city of Los Angeles, which accused the company of circumventing federal firearms law by not conducting background checks or inscribing serial numbers onto the guns it sells.

Roughly 10,000 ghost guns were recovered from crime scenes and seizures by law enforcement in 2019, according to ATF data, including 2,700 in California alone. Completed Polymer80 pistols “were used in hundreds of crimes throughout the United States,” according to the ATF affidavit.