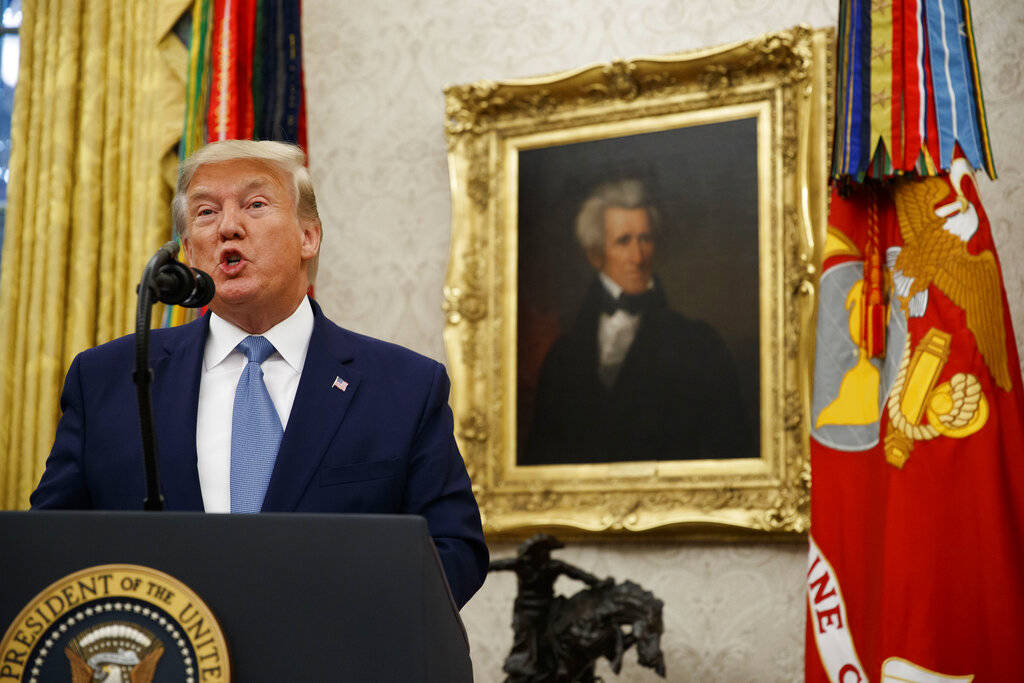 President Donald Trump speaks during a ceremony to present the Presidential Medal of Freedom to former Attorney General Edwin Meese, in the Oval Office of the White House, Tuesday, Oct. 8, 2019, in Washington. (Alex Brandon/AP) 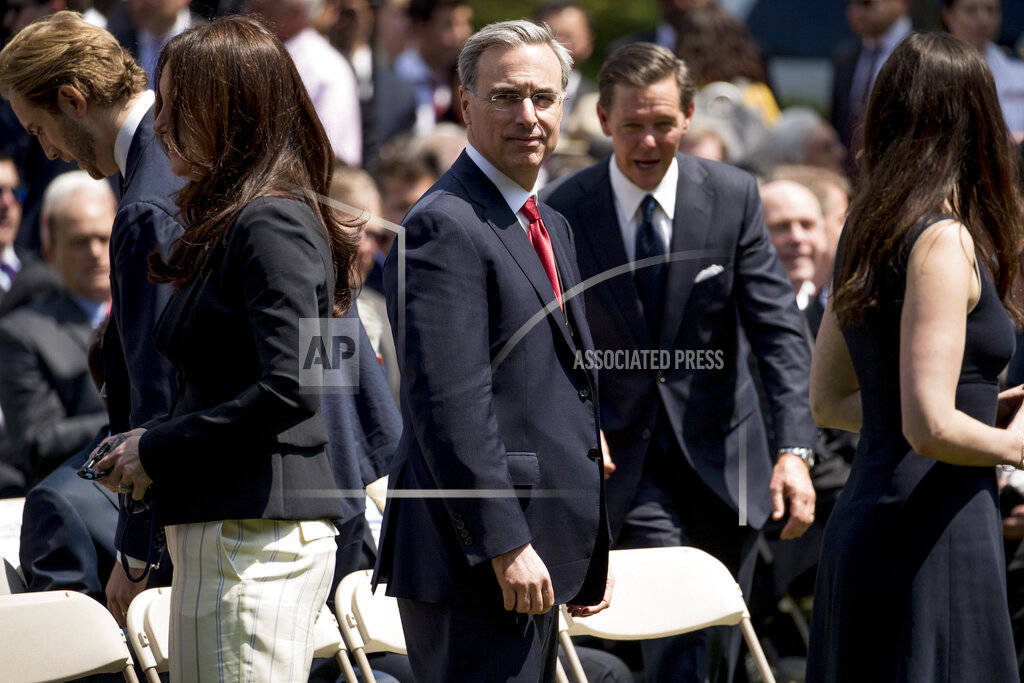 White House counsel Pat Cipollone, center, arrives for an immigration speech by President Donald Trump in the Rose Garden at the White House, Thursday, May 16, 2019, in Washington. (Andrew Harnik/AP)

WASHINGTON — The Trump White House declared political war on House Democratic leaders in a letter that laid out the administration’s reasons for not complying with multiple House subpoena requests.

The letter addressed to House Speaker Nancy Pelosi and the chairmen of the Foreign Affairs, Intelligence and Oversight committees, was released Tuesday around 5 p.m. and signed not by President Donald Trump, but his head in-house lawyer, Pat A. Cipollone.

Cipollone accused House Democrats of depriving the president of due process by holding hearings in secret, denying the president the right to cross-examine witnesses and to have counsel present.

“Put simply, you seek to overturn the results of the 2016 election and deprive the American people of the president they have freely chosen,” Cipollone charged. “Many Democrats now apparently view impeachment not only as a means to undo the democratic results of the last election, but as a strategy to influence the next election, which is barely more than a year away.”

An outraged Rep. Eric Swalwell, D-Calif., responded on Twitter, “I want you to imagine what would happen if while driving you saw police lights behind you and instead of pulling over, you sped away. If you think you can’t do that, then it’s clear why @realDonaldTrump can’t do that. But he is. And it’s because he has a guilty conscience.”

The White House list of grievances included Pelosi’s refusal to hold a vote to approve an impeachment inquiry; House Intelligence Committee Chairman Adam Schiff’s false statements to the media in which he denied his staff had been in contact with the whistleblower who filed a complaint about a July 25 phone conversation between Trump and Ukrainian President Volodymyr Zelenskiy; and reports the committee advised the whistleblower before the complaint was filed.

In a pre-emptive gesture, the Trump White House released a rough transcript of the phone conversation on Sept. 25. According to the document, Trump told Zelenskiy “a lot of people want to find out” if Biden pushed for the firing of a Ukrainian prosecutor who had investigated Burisma Holdings, a Ukrainian natural gas company that paid Hunter Biden some $50,000 per month to serve on its board.

The president describes the call as “perfect,” and proof that he was not trying to squeeze a vulnerable ally.

But because the White House had frozen a military aid package for the Eastern European nation, Democrats charge that the request was Trump’s way of trying to pressure Zelenskiy to help him dig up dirt that would help him in the 2020 election in exchange for releasing the money.

If the House held a vote on impeachment, it would likely pass and “a lot of these objections go away,” said University of Virginia law professor Saikrishna Prakash.

During a conference call with reporters, however, a senior administration official would not say if the White House would cooperate with subpoenas and witness requests if the House were to hold an impeachment vote.

“I don’t want to speculate about what would happen in various hypothetical situations,” the official said. “We’ll take this step by step. We have one concrete situation now that we’re confronting. We’ve addressed it.f the House wants to engage and alter the current circumstances, then we’ll have to evaluate that as it goes along.”

Schiff faulted the Trump White House for refusing to cooperate with the House inquiry “unless it’s on their terms. They mean: the president is above the law. The Constitution says otherwise.”

Pat Cipollone letter to Nancy Pelosi by SteveSebelius on Scribd

Schiff angry at delays, but Trump defiant about impeachment