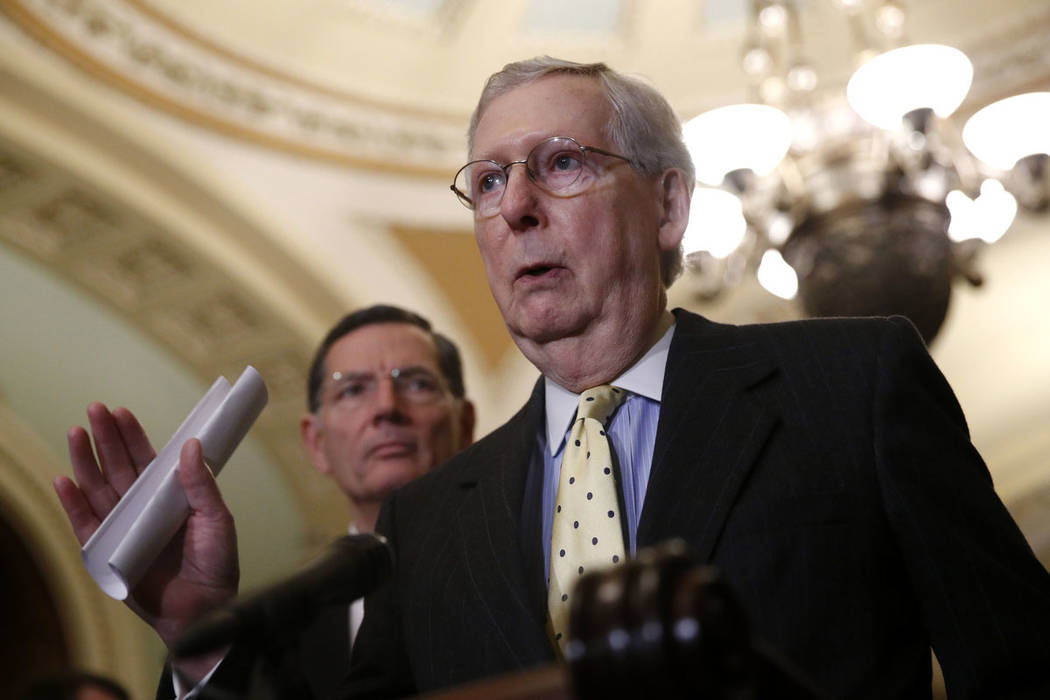 WASHINGTON — Senate Majority Leader Mitch McConnell invoked the name of his predecessor, former Sen. Harry Reid of Nevada, when he triggered yet another change to Senate rules on presidential nominations of federal district judges and lower-ranking administration officials.

The GOP voted to trim the allowable hours of debate on those nominees from 30 hours to just two, fast-tracking lifetime judicial nominations.

Changes to the rule passed on a mostly party-line vote, 51-48, with Republicans Susan Collins of Maine and Mike Lee of Utah voting with Democrats.

McConnell pointed out that it was Reid who first changed Senate rules, in 2013, when Republicans blocked President Barack Obama’s nominees to circuit courts and agencies. Reid lowered the threshold of votes to overcome a filibuster from 60 to a simple majority for confirmation of administration nominees and district court judges.

Republicans went further in 2017 and applied that rule change to Supreme Court justices, when Democrats threatened to use the 60-vote threshold to stop President Donald Trump’s nomination of Neil Gorsuch to the high court.

McConnell said Democratic obstruction of lower court appointees and sub-Cabinet level positions, by insisting on the 30 hours of debate, was out of hand.

“It’s time for this sorry chapter to end,” McConnell said.

“We are putting on a fast track nominations of people being appointed to the federal bench, which is a lifetime appointment,” said Sen. Catherine Cortez Masto, D-Nev. “This is not how the Senate should be operating.”

Democrats bristled at the change, especially because McConnell led Republican obstruction of Obama’s nomination of Judge Merrick Garland to the Supreme Court in 2016. Garland’s nomination was never considered by the Senate, and his nomination died when Trump was elected.

The GOP-controlled Senate then used a rule change to confirm Gorsuch, eliminating the 60-vote threshold that allowed confirmation in favor of a simple majority vote.

McConnell claimed Democratic obstruction forced 128 votes in the last Congress to end debate and vote on judicial picks, even those that Democrats supported.

The rule change limiting debate to two hours sharpened the already partisan tone of the Senate.

In February, Reid defended his decision to employ “the nuclear option” and change the rule for confirming circuit court judges during an interview with the Review-Journal.

Reid said the obstruction by McConnell and Republicans kept Obama from filling judicial seats on appellate courts and agencies and boards that served vital oversight and watchdog functions.

The former majority leader said the rule change that eliminated the 60-vote threshold for appellate courts and sub-cabinet positions led to the confirmation of 100 judges and appointments to the National Labor Relations Board and the Consumer Financial Protection Bureau.

“It was for the good of the country,” Reid said of the rule change, which also set the precedent for the majority to change Senate rules in the future on a straight majority vote.

Reid also said the Republican obstruction of the Garland nomination had nothing to do with precedent.

After the 2013 rule change was triggered by Reid, McConnell told reporters it was “a sad day” in the Senate.

Leaders in both political parties have shied away from changing rules to end the 60-vote threshold to end a filibuster and pass legislation.

But Trump has pressured McConnell to change that rule to pass legislation that the president has favored.