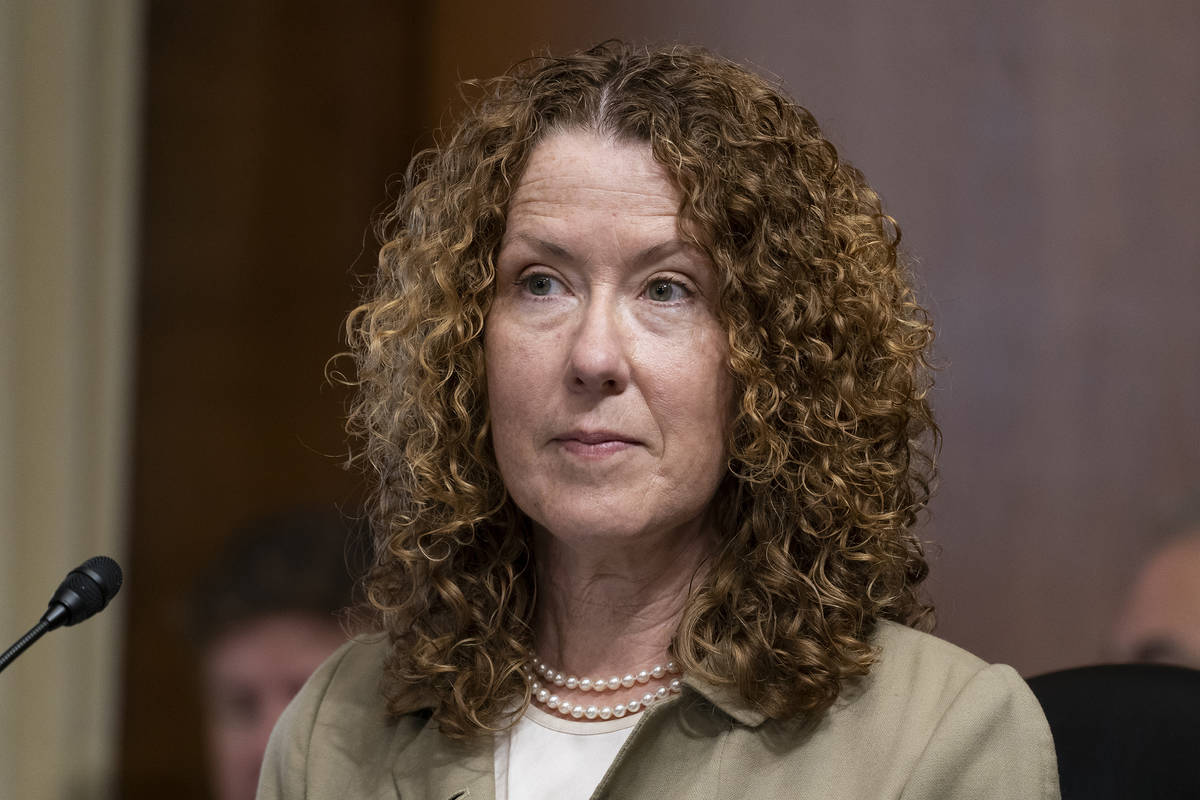 FILE - In this June 8, 2021, file photo, Tracy Stone-Manning listens during a confirmation hearing for her to be the director of the Bureau of Land Management, during a hearing of the Senate Energy and National Resources Committee on Capitol Hill in Washington. (AP Photo/Alex Brandon, File)

Nevada Democrats Catherine Cortez Masto and Jacky Rosen voted with the majority, 50-49, to allow debate on the nomination of Tracy Stone-Manning of Montana to direct the agency. One Republican, Mike Rounds of South Dakota, did not vote.

Rosen met with the nominee and said she is qualified to head an agency that oversees 48 million acres, or 67 percent, of the federal public lands in Nevada. (The federal government owns about 87 percent of all land in Nevada overall, but different patches are overseen by different agencies.)

But Republicans were united in their opposition to Stone-Manning, citing a 1980s investigation into an act of environmental terrorism in Idaho where metal spikes were pounded into trees to prevent them from being harvested. Tree-spiking poses a grave danger to loggers.

A University of Montana graduate student at the time, Stone-Manning sent a profanity-laced letter to the U.S. Forest Service warning of the tree spiking, carried out by friends. She also received immunity for testimony before a grand jury that led to convictions for two men involved.

But Republicans accused Stone-Manning of lying about whether she was ever a target of the investigation. A federal investigator said she was.

Sen. John Barrasso, R-Wyo., said Stone-Manning was under investigation for the tree spiking in the Clearwater National Forest, and lied to the Senate about her role in the case.

“Lying to the United States Senate has consequences. In this case, her actions and her lies should cost her this nomination,” said Barrasso, the ranking Republican on the Senate Energy and Natural Resources Committee.

“How can the men and women who work at this important agency respect Tracy Stone-Manning knowing she threatened her colleagues at the U.S. Forest Service?” Barrasso asked during a hearing last week.

Sen. Mike Lee, R-Utah, said people could have been hurt or killed by the actions that Stone-Manning participated in. He held up a steel spike on the Senate floor moments before the vote to dramatize the danger to loggers and firefighters using chainsaws to cut timber.

Democrats, in turn, accused Republicans of lying about her role in the incident for political reasons.

The facts of the case, and her association decades ago with convicted environmental terrorists, have been in the spotlight since Stone-Manning, a former chief of staff to Montana Gov. Steve Bullock, a Democrat, was nominated by Biden to head the Bureau of Land Management.

She is a former aide to Sen. Jon Tester, D-Mont., who pushed her as a candidate for nomination to the White House and said he looks “forward to confirming her on the Senate floor as soon as possible.”

“Members of this body have played politics with this nomination,” Tester said before the Senate vote. He said Stone-Manning was being dragged through the mud.

Despite a GOP letter asking Biden to withdraw the nomination, the White House has continued to back the nominee.

Democrats have charged the GOP with carrying out a political vendetta against a qualified candidate with an exemplary career who embraces climate change policies favored by environmentalists, tribal leaders and clean-energy groups.

To some, the confirmation fight has become a proxy battle between groups and interests that back differing policies on public land use.

Tuesday’s vote allowed the nomination to move forward to a full debate and final vote in the Senate.

Energy and Natural Resources Committee Chairman Joe Manchin, a Democrat from coal-producing West Virginia and a swing vote on energy issues, backed the nomination of Stone-Manning and said her college years activity amounted to being a “youthful sympathizer” for the environmental movement.

He said he found no evidence in documents and court records that she was involved in criminal acts decades ago, or was a target of the investigation. He cited testimony from an assistant U.S. attorney.

“Ms. Stone-Manning was never charged with spiking trees; she was never tried for spiking trees; and none of the men who did spike trees ever suggested that she did. Nor was she a target in the investigation,” Manchin said.

“Nevada needs a BLM director who will focus on our needs,” she said.

Cortez Masto said she was assured by Stone-Manning that, if confirmed, Nevadans would have access to public lands, protection for the state’s outdoor economy, support for tribes, conservation efforts for landscapes and policies to combat climate change.

“I have spoken with Tracy Stone-Manning about the unique challenges facing our state and I am confident she will be a strong advocate for Nevada and other Western states,” Cortez Masto said.

Democrats in those other states, Sens. Martin Heinrich of New Mexico and John Hickenlooper of Colorado, also supported the nomination, with Heinrich denouncing the GOP tactics against Stone-Manning.

Rosen also praised Stone-Manning for her “many years of public service and her work to protect public lands in the western United States.”

Although the confirmation process does not involve House participation, Rep. Mark Amodei, R-Nev., whose congressional district includes the northern half of the state, was cautious about the possible appointment of Stone-Manning and the impact on rural residents and ranchers.

“I hope her opinions and methods have evolved since some of the notable activities of her younger years,” Amodei said.

With Tuesday’s action, the nomination moves forward in the confirmation process and a vote that is likely to fall along strict party lines and could result in a tie-breaking vote by Vice President Kamala Harris.

Tobias, a founding faculty member of the UNLV William S. Boyd School of Law, said it appears the nomination is likely “going to squeak by, but it’s going to be close.”

Barrasso said Republicans would continue to raise Stone-Manning’s past to raise public awareness to force a Senate rejection of the nomination.

But Democrats were quick to note that Montana state Republicans have worked with Stone-Manning on state issues, a fact they said underscores the political nature of the congressional Republican opposition to her confirmation.

Democrats also noted Stone-Manning worked for Bullock when he ran unsuccessfully for an open Senate seat won by Sen. Steve Daines, R-Mont., who led the effort to have Biden withdraw the Stone-Manning nomination.

Daines took the Senate floor Tuesday and charged that Stone-Manning “stonewalled the federal investigation” into the tree-spiking terrorism, and did so “without remorse.”

“Never once has she apologized for covering up this crime,” Daines said.