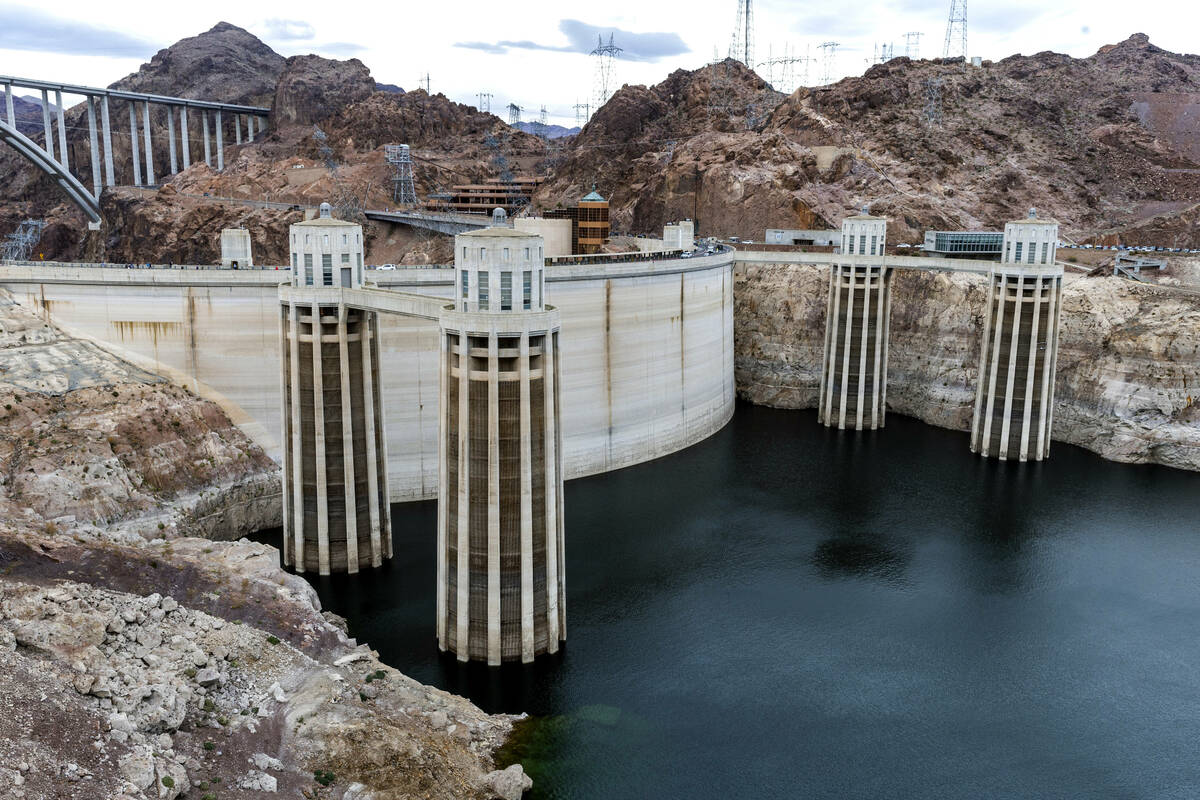 The intake towers at Hoover Dam are where water enters from Lake Mead to generate electricity at the Lake Mead National Recreation Area on Tuesday, Dec. 27, 2022, in Boulder City. Democratic state lawmakers have an ambitious environmental and climate agenda planned for the upcoming Nevada Legislature that kicks off on Feb. 6. (L.E. Baskow/Las Vegas Review-Journal) @Left_Eye_Images

Democratic state lawmakers have an ambitious environmental and climate agenda planned for the upcoming Nevada Legislature that kicks off on Feb. 6.

But the election of Republican Gov. Joe Lombardo, who ousted Democrat Steve Sisolak after one term in November, likely changes the political calculus of what Democrats can realistically accomplish in the biennial lawmaking session.

From water conservation to heat mitigation, the proposals look to address a wide swath of environmental issues for a state and region that continues to grow warmer and drier, pinching water supplies, increasing wildfire threats and driving summer temperatures in urban areas to dangerous levels.

“We are already seeing the impacts of a drying and warming climate in Nevada. It’s stressing our water supplies. It is putting people’s health at risk due to extreme heat due to wildfire smoke,” said Assemblyman Howard Watts, D-Las Vegas, in an interview with the Review-Journal. “We know the longer we delay, the harder it’s going to be to make changes that allow us to avoid the worst impacts. So by taking continued action, piece by piece we can avoid major issues that have to be addressed down the line.”

Watts, who chaired the Joint Interim Natural Resources Committee where many of the proposals originated, called Sisolak a “champion on climate and conservation issues,” and acknowledged that Lombardo’s win alters how things might play out over the next several months, as now for the first time since 2017, the Democratically controlled Legislature will not have a fellow Democrat in the governor’s mansion.

Sen. Pete Goicoechea, R-Eureka, who also served on the interim committee, said he’s hopeful the power dynamic change will spur more conversations between not just Republican and Democratic lawmakers, but also between the lawmakers and the governor — something he said did not exist for Republican lawmakers in the last two sessions with Sisolak as governor.

“I do think it will be a better session that way,” he said. “I think there’s going to have a lot more conversation than in the last two sessions. And conversation is good.”

Watts believes that there’s plenty of room for compromise, and that many of those proposed bills can also be viewed as addressing public health and safety issues for Nevadans, which he thinks should resonate with Lombardo’s lengthy career in law enforcement, while also increasing economic prosperity in the state.

“I still believe that we can make progress on these things, and that conservationists can feel good about making progress and that we can also do it in a way that promotes economic benefits and improves health outcomes, which I think are issues that are going to be really important to the administration,” Watts said.

Here are some of the more prominent bill proposals on climate, water and the environment that will be considered by the Legislature:

Heat mitigation — The bill would require local governments to include plans for mitigating the effects of extreme heat in their master plans and in local code development. Watts noted that Reno and Las Vegas are two of the fastest warming cities in the country, and said finding ways to mitigate the impacts of excessive heat is especially important as Southern Nevada continues with its efforts to remove even more grass in nonfunctional areas like roadway medians and decorative business landscaping, as studies have suggested that removing grass without sufficient shade replacement will drive temperatures even higher in urban landscapes.

Water conservation— There are a handful of proposals that deal with water conservation in some form. One would look to add funding for Southern Nevada Water Authority’s program for converting homes away from water-consuming septic systems and hooking them into the municipal sewer systems, where water used indoors could be treated and recycled back to Lake Mead. There are roughly 14,000 homes in the Las Vegas Valley that use septic systems.

He said he’d like to see various state departments work with the Office of Minority Health and Equity to bring those issues to light when planning new developments, and what options are available to address them.

Groundwater management — This will likely be one of the most contentious issues for lawmakers this session. The interim committee put forward a proposal to clarify Nevada’s century-old water law in hopes of modernizing it. Nearly half of the state’s groundwater basins are over allocated, and disputes over water rights have ended in court more and more often in recent years.

Goicoechea said that while he believes in the priority water law, the state needs to figure out a way to make it work better. And to him, that starts with investing the money needed to properly inventory just how much ground water the state has and how much of that is being used.