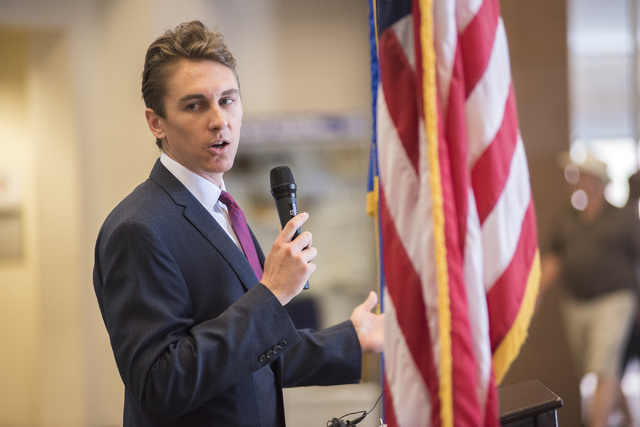 The “statements of contest” seeks a judicial order requiring that the electronic vote tallies in their races be compared with the backup paper records.

In a statement, Jones, who lost by 10 percentage points in Assembly District 21 to incumbent Assemblyman Derek Armstrong, R-Henderson, said the move is being sought to “ensure we know the full truth for each race.”

Jones and the other challengers ran on a no-tax platform and most sought to unseat incumbents who voted in favor of a commerce tax passed by the 2015 Legislature and pushed by Gov. Brian Sandoval to fund his two-year budget and education agenda.

They allege the tallies had “inexplicable electronic results.”

“What an unfortunate abuse of the election system,” Anderson said. “The votes have been tallied and we’re excited to be moving on to the general election and moving Nevada forward.”

Clark County Registrar of Voters Joe Gloria said there were no problems or malfunctions with voting machines that would have skewed the election outcome.

“The machines are functioning properly and the canvass reflected all our totals balanced,” Gloria said Tuesday.

“There’s always people who … unfortunately have a conspiracy theory,” he added.

Gloria acknowledged some voter registration cards mailed in December in two Assembly districts contained the wrong district number. He said the mistake was discovered in January and new cards were issued.

“All the sample ballots were correct,” Gloria said.

Foust lost in District 19 by a 22 percentage point margin to Assemblyman Chris Edwards, who did not vote for the tax increase.

The candidates contend tallies from precincts in those districts showed “large and consistent discrepancies” between voter turnout and votes tabulated electronically.