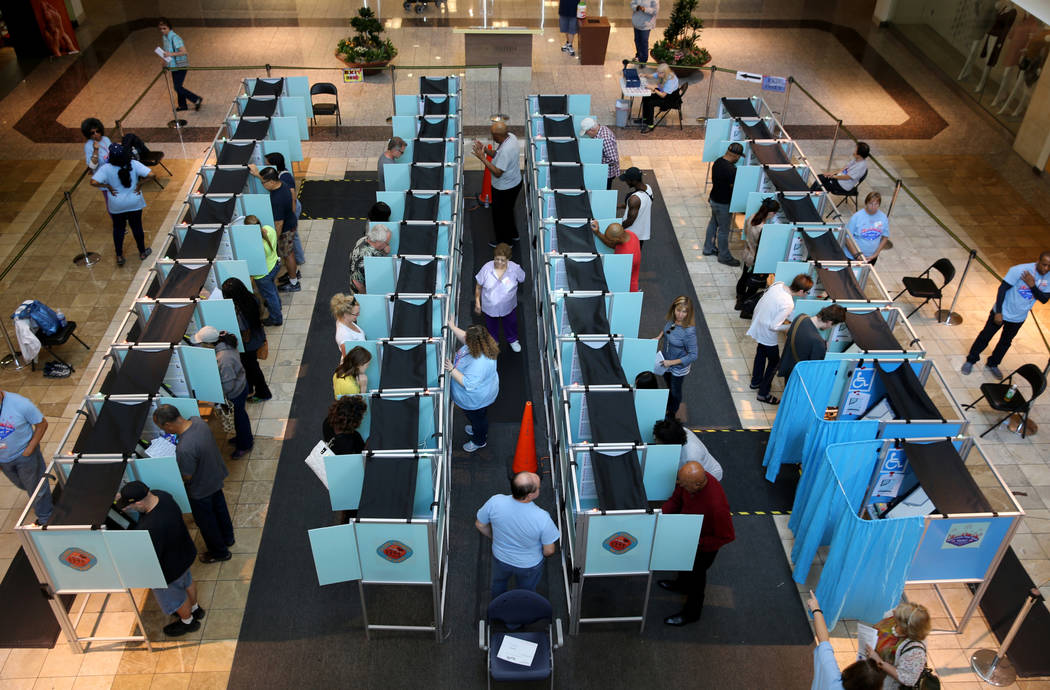 More than 620,000 Nevadans have cast ballots ahead of Tuesday’s midterm election, far surpassing voter turnout in the last midterm.

More than 550,000 of those are from in-person early voting, with the remaining ballots by absentee and mail-in, according to numbers from the Nevada secretary of state’s office. The totals far surpass the turnout of past midterm election years like 2014 (267,000) and 2010 (379,707).

Democrats hold a statewide vote lead of about 22,300. About 41.4 percent of the Nevadans who have cast a ballot so far are Democrats, 37.9 percent are Republicans, and the remaining 20.8 percent are registered nonpartisans or third-party members.

As of 11 a.m. Saturday, the secretary of state’s office had not reported Friday early voting totals for Elko, Esmeralda, Mineral and White Pine counties. Those counties lean Republican, so the Democrats’ statewide lead going in Election Day could be slightly smaller.

Democrats are turning out at a significantly higher clip than in 2014, when Republicans won nearly every competitive race. But they have not built quite the lead that was seen in presidential election years like 2012 and 2016, when Democrats had 40,000-plus leads heading into election day.

Although Democrats have a voter registration edge of about 72,000 over Republicans, GOP voters are turning out at a higher percentage — 45.5 percent compared to 43.5 percent of Democrats.

Although Hof, who won the GOP nomination in June, died last month, his name is on the ballot. If he wins, county commissioners from Nye, Lincoln and Clark counties will appoint a replacement from the Republican party.

“I’ve been asked by Nevada State Republican Party Chairman Michael McDonald, and a number of assemblymen statewide, party leaders and numerous voters here in Nye County, to consider seeking the appointment of Assembly in District 36, in the event that Dennis Hof gets elected,” Burdzinski said in a statement. “After careful personal consideration, including discussions with my supportive family, I will be actively pursuing the appointment for Assembly District 36.”

Speculation has swirled that Assemblyman James Oscarson, who was unseated by Hof in the primary election, might also be a frontrunner for the seat.

An immigration advocacy group is upping its efforts to prevent Clark County School Board Trustee Kevin Child from getting re-elected.

On Thursday, Make the Road Nevada held a press conference denouncing the trustee and encouraging voters to cast their ballots for political newcomer Irene Cepeda. Organizers have hung new posters about Child and are increasing efforts to knock on doors in District D.

The increased efforts were spawned by a Review-Journal report which shed new light on a litany of complaints filed against the trustee. New records released by the district under court order show that more than two dozens employees were interviewed about Child’s harassing and intimidating behavior.

Former Superintendent Pat Skorkowsky took steps to try to limit Child’s access to schools in the wake of the complaints. Child had maintained the complaints against him were contrived in an effort to keep him from asking tough financial questions of the district and to keep him from winning re-election to a second term.