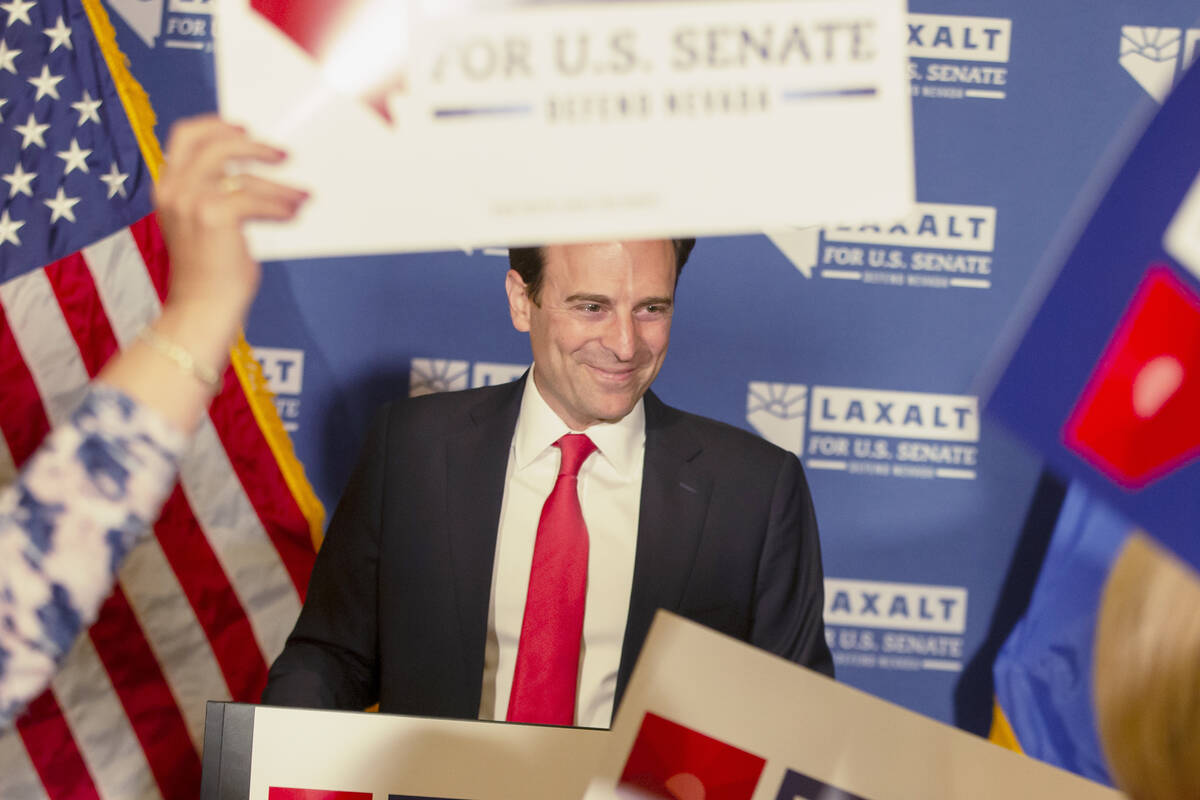 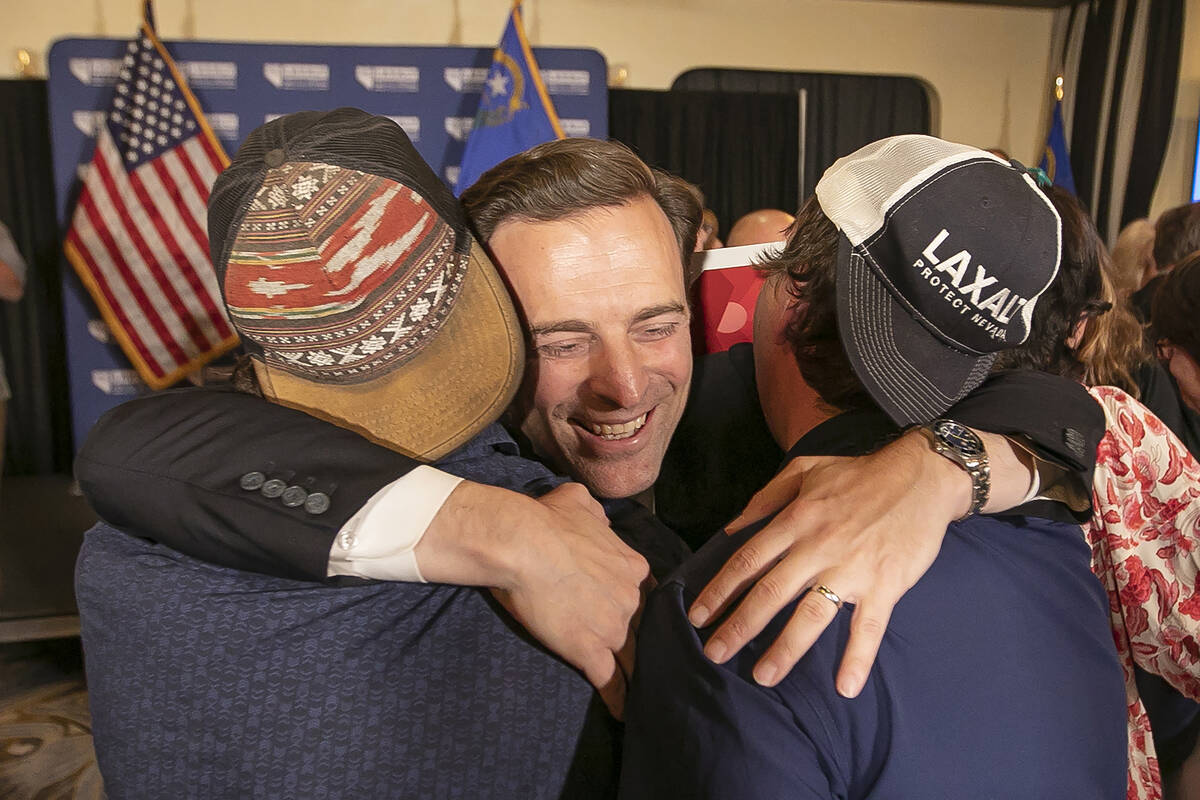 Right-wing Republican candidates won a majority of statewide races in the Nevada primary Tuesday, many of whom have embraced election conspiracies. But that doesn’t mean that a red wave is coming in November, some experts say.

Election night was a win for the right and for Donald Trump — all Trump-endorsed candidates won — but results could say more about what the loudest Republicans believe than about what all Nevadans want in their political future.

“This is not the first time right wing candidates have done well in Republican primaries in Nevada,” said Ken Miller, an assistant professor of political science at UNLV.

Adam Laxalt, who has pushed election fraud conspiracies, won his primary for U.S. Senate and will face Democratic Sen. Catherine Cortez Masto. Jim Marchant, the most extreme candidate in a crowded secretary of state field, won his primary, even shedding doubt on the veracity of his own election. Sigal Chattah defeated a moderate opponent in the attorney general race. Michele Fiore, the firebrand who left the governor’s race to instead run for treasurer, won her primary as well.

Miller chalks up those right wing victories more to how primaries work than to a new movement in the conservative wing of state Republicans.

“Primaries can be turbulent,” Miller said. “There’s low turnout, and especially for down-ballot races there’s less campaigning, fewer ads and the voters have less information. The most activated voters show up in higher numbers.”

Marchant’s victory may have the most direct impact on future elections. The secretary of state runs elections and Marchant, a former assemblyman, has proposed radical reforms, including stopping mail-in voting all together. He raised doubts about the 2020 election in Nevada and about the primary Tuesday night, even though he won.

“I’m not really confident in the result,” Marchant said. “There’s a lot of doubts in electronic voting systems. Fraud is a harsh word, but there could have been anomalies — malicious or accidental — based on what I’ve heard.”

He claims that people have told him about improper election practices, “especially in Nye County,” though he did not cite specifics. That didn’t stop him from declaring victory.

Marchant said he will have the same doubts over the upcoming November general election.

“I’m surprised that I won,” he said. “But I don’t know that the system worked.”

“The election system is too complicated. We need to simplify it,” he said.

His proposed changes to how the state would conduct elections include eliminating early voting and only using paper ballots, something which election officials say would make election results take days, if not weeks, to tally. He also wants to mandate voter ID and prevent ballot harvesting.

“Those policy proposals just aren’t popular (in general elections),” Miller said. “Nevadans want voting to be easier, not harder, as well as being secure.”

Marchant said his goal is to make people confident again in the state’s election, and bring additional transparency to the process.

He said he wants every county auditor in the state to commit a full audit of primary results by hand, something he would mandate if elected and is pushing for now. He’s asked the Clark County Commission for these audits before, with no luck.

“The Clark County Commission won’t even talk to me, but you know how they are,” he said.

Last October, Marchant spoke at a QAnon convention at the Ahern Hotel. He still claims that he’s not familiar with the right-wing conspiracy theory.

“I spoke there because I wanted to talk to a room of 1,000 people. I’m running for office!” he said.

The only right-wing candidate to lose their race to a more moderate opponent was governor candidate Joey Gilbert, who lost to Clark County Sheriff Joe Lombardo. Gilbert claims that he is the victim of voter fraud and refuses to concede, but no evidence has been provided to back up his claim.

The most telling races for what Nevada’s political future holds were the governor and senate primaries, Miller said. The common thread there? Establishment-backed victory.

Those races’ two winners, Lombardo and Laxalt, had the backing of major Republican organizations, Trump and all the money and influence which come with them.

While Gilbert still garnered over a quarter of all votes in that race, Lombardo’s victory is Nevada Republicans siding with a more established, moderate candidate in the race which got the most attention and discussion on the ballot, Miller said.

“Nevada is not an ideologically extreme state,” Miller said.

Even Trump’s influence didn’t move the needle that much, according to Miller.

“Trump plays a much smaller role than he’s given credit for,” he said. “Trump is concerned about his standing in the party. He’s a scoreboard watcher, and picks candidates who are already favored to win.”

Right wing victories may even be a blessing for statewide Democrats, Miller said. He compared the upcoming general election to 2010, where Republicans had a real chance to unseat Sen. Harry Reid, but nominated a right-wing candidate in the primary who couldn’t get it done.

The biggest win of the night for right wing Republicans was Chattah’s attorney general primary victory. Her opponent, Tisha Black, was backed by the state establishment but started her campaign very late, in February. Chattah is much farther to the right than Black, she even derided Black as a “Democratic plant.” A tight race was expected, but Chattah defeated Black by 11 percent of the vote. However, Chattah’s victory makes incumbent Democrat Aaron Ford’s re-election bid easier, Miller said, as more extreme candidates are less palatable to general election voters.

For down-ballot Republicans — Marchant, Chattah, Fiore and others — to succeed, they need Lombardo and Laxalt to turn out voters.

“Their fate is tied to the top of the ballot,” Miller said. “Especially for the down ballot races, not many people are going to split their tickets.”