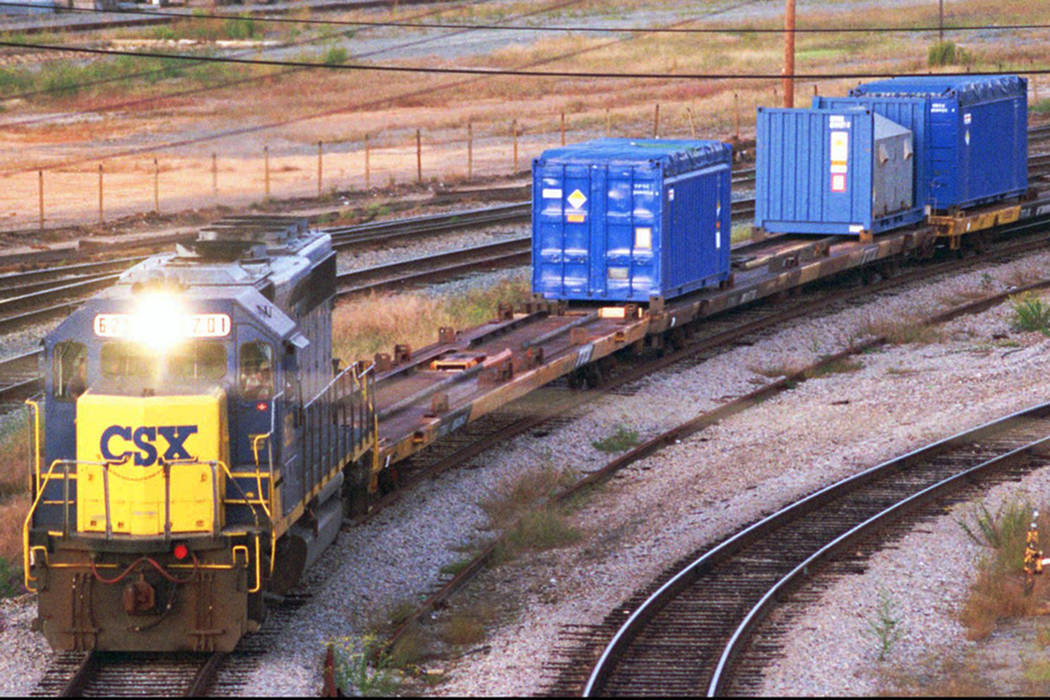 A CSX Train with spent nuclear fuel passes through Florence, S.C., on its way to Savannah River Site Weapons Complex near Aiken S.C. on Sept. 29, 1994. Nevada and South Carolina are jostling for a home-field advantage of sorts in a federal court battle that could result in a metric ton of weapons-grade plutonium being stored 70 miles from Las Vegas. (Jeff Chatlosh/The Morning News via AP, File)

WASHINGTON — Nevada Sen. Catherine Cortez Masto said Tuesday she struck a deal with Energy Secretary Rick Perry to remove a half metric ton of weapons-grade plutonium from the state starting in 2021, with assurances that no future shipments will come from South Carolina.

Cortez Masto agreed to drop her hold on presidential nominees for the Department of Energy and also agreed to a tour of the Device Assembly Facility at the Nevada National Security Site north of Las Vegas where the plutonium is currently being stored.

The Energy Department last year was ordered by a federal court in South Carolina to move one metric ton of weapons-grade plutonium out of the Savannah River Site.

A half-ton was shipped to the Nevada security site as the state was preparing a federal court filing seeking an injunction to stop the shipment. The Energy Department is required to move an additional five metric tons out of South Carolina in future years.

The National Nuclear Security Administration acknowledged the shipment of plutonium in a court filing in Reno, as a federal judge in January was deliberating on Nevada’s lawsuit to stop the shipment. The agency said the shipment occurred before Nevada filed its lawsuit in November 2018.

Gov. Steve Sisolak and the state’s congressional delegation were outraged by the secret shipment. The Energy Department said the state was notified in August 2018 that the shipment was coming.

Cortez Masto placed a hold on President Donald Trump’s nominees for the Department of Energy, delaying the process on confirmations while she and Perry held discussions.

Under their agreement, the Department of Energy will begin removing the plutonium in 2021. Cortez Masto said she also won assurances that none of the remaining plutonium from South Carolina would be shipped to the state.

In a letter, obtained by the Energy Department, from Perry to Cortez Masto, dated April 24, the secretary said the plutonium would be removed from the state between 2021 and 2026. He also announced about $1 billion in upgrades at the Nevada security site where the weapons-grade plutonium is being stored.

Perry, who has argued that the DAF facility is safe, despite a Defense Nuclear Facilities Safety Board report that cited seismic concerns and other potential problems, will tour the installation with Cortez Masto, Sen. Jacky Rosen and National Nuclear Security Administration Administrator Lisa Gordon-Hagerty.

That tour is expected to occur in May.

Cortez Masto said she wanted to tour the facility to “ensure that it is safely stored until it is moved out of Nevada.”

“That’s why I want to see it for myself,” she said.

Perry agreed to the timetable and assurance of new future shipments in a letter to the senator during the Senate’s two-week recess in April.

Cortez Masto said the agreements came from cordial conversations with the Energy secretary, who also is seeking to revive the licensing process to open Yucca Mountain as a permanent nuclear waste repository, which has drawn sharp political opposition by the state.

“We’ve got to be vigilant,” Cortez Masto said of the state’s efforts in opposition to nuclear waste storage. “We are strong. We are united, it crosses party lines.”