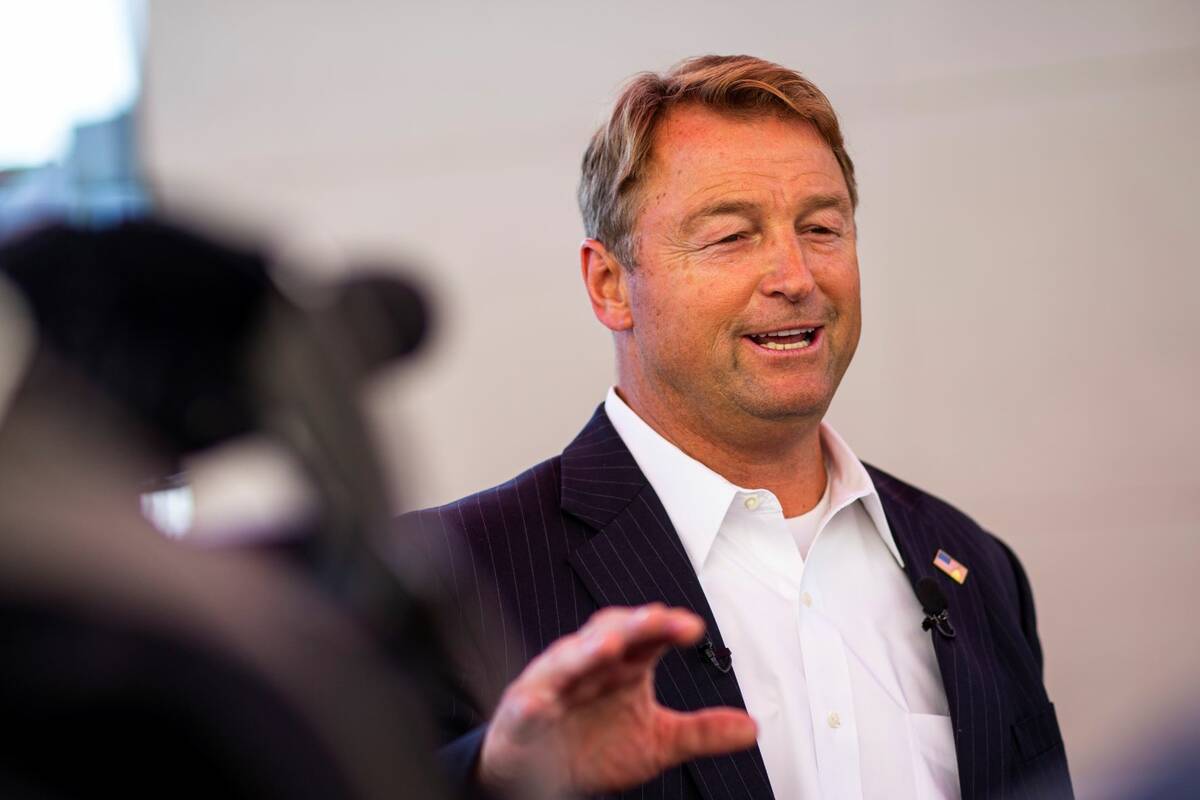 After refusing to even acknowledge early in his gubernatorial campaign who he thinks the president of the United States is, former U.S. Sen. Dean Heller is taking a stronger stance.

In a brief interview following a speech at a Nevada Republican Club luncheon in the Ahern Hotel on Tuesday afternoon, Heller said most Nevadans think Joe Biden is an illegitimate president and that he agrees with them.

His campaign later clarified that he meant to say most Republicans in the state think Biden is an illegitimate president.

Heller said Democrats have also raised doubt about the legitimacy of past elections, and that Biden himself has called into question the legitimacy of the upcoming 2022 election. (The White House has tried to clean up remarks Biden gave in response to a question about the midterms, clarifying that he was not trying to cast doubt on the election.)

“This game you guys are playing is just going to go on and on, and if you have a president of the United States today that says, ‘I can’t tell you whether or not the ’22 election is going to be legitimate,’ don’t hang this around Republican necks,” Heller said. “This is on both sides of the aisle.”

Heller’s comments come weeks after he had a meeting with former President Donald Trump, who continues to insist the 2020 election was stolen, despite numerous lawsuits, audits and recounts failing to support that assertion.

The former senator would not share what he and Trump discussed.

“That’s personal,” Heller said. “I don’t kiss and tell when it comes to Trump.”

Heller said he hopes to get Trump’s support in Nevada’s crowded gubernatorial contest, but he doesn’t know if the former president is even going to get involved at all.

He called Trump a good friend, but the two have a tenuous history. Heller was critical of Trump in 2016, but came around to praising the former president when he ran his unsuccessful re-election campaign for U.S. Senate in 2018.

Heller is lagging far behind Clark County Sheriff Joe Lombardo in the gubernatorial primary, according to a poll released Tuesday by the Nevada Independent and OH Predictive Insights.

Lombardo is leading in the poll with 28 percent of respondents saying they are supporting him in the primary. Of the 230 Republican voters polled, 9 percent said they support Heller.

Still, 36 percent of those polled say they are unsure of who they will support in the GOP primary. The poll has a margin of error of 6.5 percentage points.

And Heller is unfazed by what those numbers show. He said he doesn’t care much about polling, but other polls are showing him ahead of Lombardo and Gov. Steve Sisolak, who is seeking re-election.

“I don’t care at this point,” he said. “It’s just work, get out there and do the work, and we’ll reach Election Day.”

Heller did take swipes at Lombardo during his speech, criticizing the sheriff for opposing constitutional carry, a policy that allows gun owners to carry a concealed weapon without a permit. He said Nevada sheriffs oppose the policy because it prohibits them from taking guns away from people.

He also said he is opposed to sanctuary cities and that Lombardo is “part of that problem.”

The Lombardo campaign declined to comment. However, the Metropolitan Police Department was criticized after revelations that it continued to cooperate with federal officials on deportations even after ending a formal partnership program that operated in the Clark County Detention Center.

During his speech, Heller criticized Gov. Steve Sisolak for shutting down the state at the beginning of the pandemic and putting Nevada “at the top of every bad list in America”: unemployment, graduation and suicide rates.

“In every decision, Governor Sisolak prioritized lives and livelihoods, and Nevada’s strong recovery as the state with the best economic momentum is proof of those efforts,” Sisolak campaign spokesperson Molly Forgey said in a statement. “Whether it’s Dean Heller refusing to recognize the president as legitimate, Joe Lombardo hypocritically denouncing vaccines, or Michele Fiore shooting beer bottles, the one thing we can count on is Republicans getting more desperate. We eagerly await any Republican’s actual plan to address the issues facing Nevadans.”

Heller said if he is elected governor, he would use executive authority to eliminate all mandates, require voter ID, allow constitutional carry, ban sanctuary cities, ban the teaching of critical race theory and repeal the commerce tax. Most of those goals, however, would require action from the Legislature, currently controlled by Democrats.