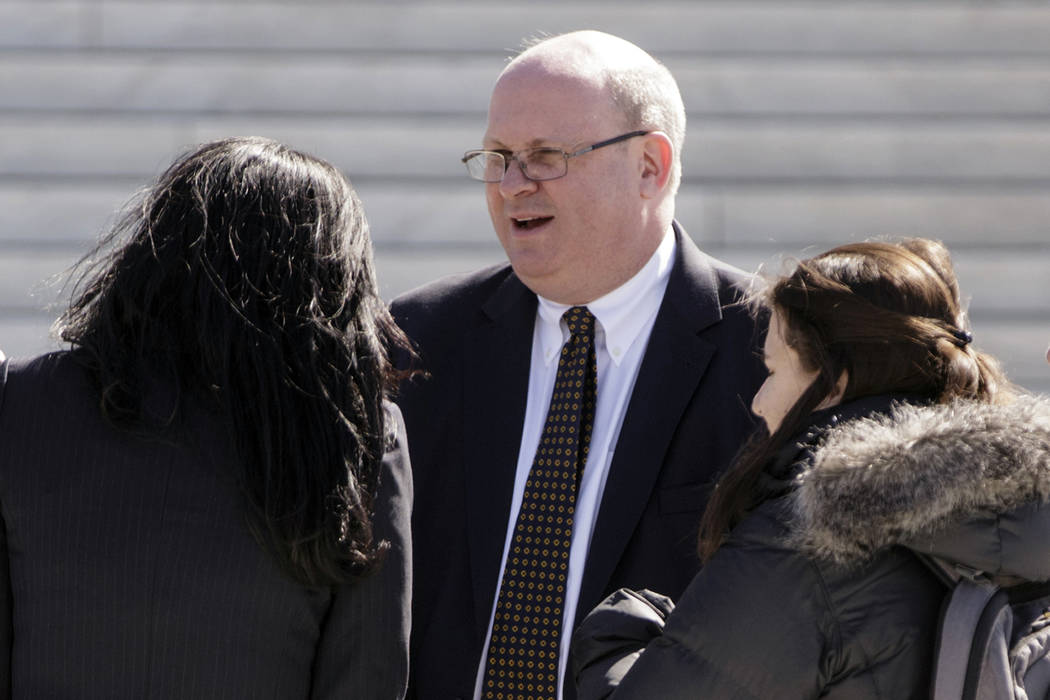 Attorney Marc Elias, one of several lawyers who appeared in the in the case of Wittman v. Personhuballah, stands on the plaza of the Supreme Court in Washington on March 21, 2016 (J. Scott Applewhite/AP)

As Republican-backed recalls targeting a trio of Nevada state senators near the end of the signature-gathering period, Democrats are asking a federal court to halt the efforts before any special elections can be held.

And while Democrats take the recall challenge to court, Republicans have accused anti-recall petitioners of using dirty tactics.

The motion asked the court to hold an expedited hearing before Nov. 30.

The motion was filed as part of a lawsuit brought last month by Elias and Schrager on behalf of five voters in Southern Nevada, who claim that the recalls would put a burden on the plaintiffs’ right to vote and would “undermine a republican form of government by threatening to upend the undisputed results of legitimate and regularly scheduled election.”

“Nevada’s recall laws are being used to upend the results of legitimate democratic elections in pursuit of partisan political advantage — allowing Republicans to regain control of the state Senate through a special recall election that is certain to involve a smaller, whiter and wealthier electorate,” the attorneys wrote in the filing. “The current recall efforts’ injection of extreme partisanship into Nevada’s political process comes at the expense of voters,’ particularly minority voters,’ rights under the First and Fourteenth Amendments and the Voting Rights Act.”

The Secretary of State’s Office confirmed last week that it had received enough signatures to advance the recall effort against Woodhouse to a special election, which would occur in December if nothing delays the process. Democrats are gathering documents for people who want their signatures removed from the recall petition. The deadline for those documents and any other challenges to the recall is Nov. 13.

The deadlines for the signatures for the Farley and Cannizzarro recalls are Thursday and Nov. 14, respectively.

Stephen Silberkraus, a former assemblyman who is leading the committee to recall Woodhouse, filed a pair of complaints this week with the Secretary of State’s Office accusing the anti-recall group of dirty tactics.

The complaint filed Tuesday claims that a text message was sent to recall petition signers from Clark County Democratic Party Chair Donna West stating that the recalls would cost “more than a million dollars.”

Clark County Registrar of Voters Joe Gloria has estimated the special elections would cost about $50,000 each.

Silberkraus also filed a complaint Monday that accused anti-recall petitioners of misrepresenting themselves as state workers. In addition, Silberkraus challenged the constitutionality of allowing people to have their signatures removed after the petition was filed.