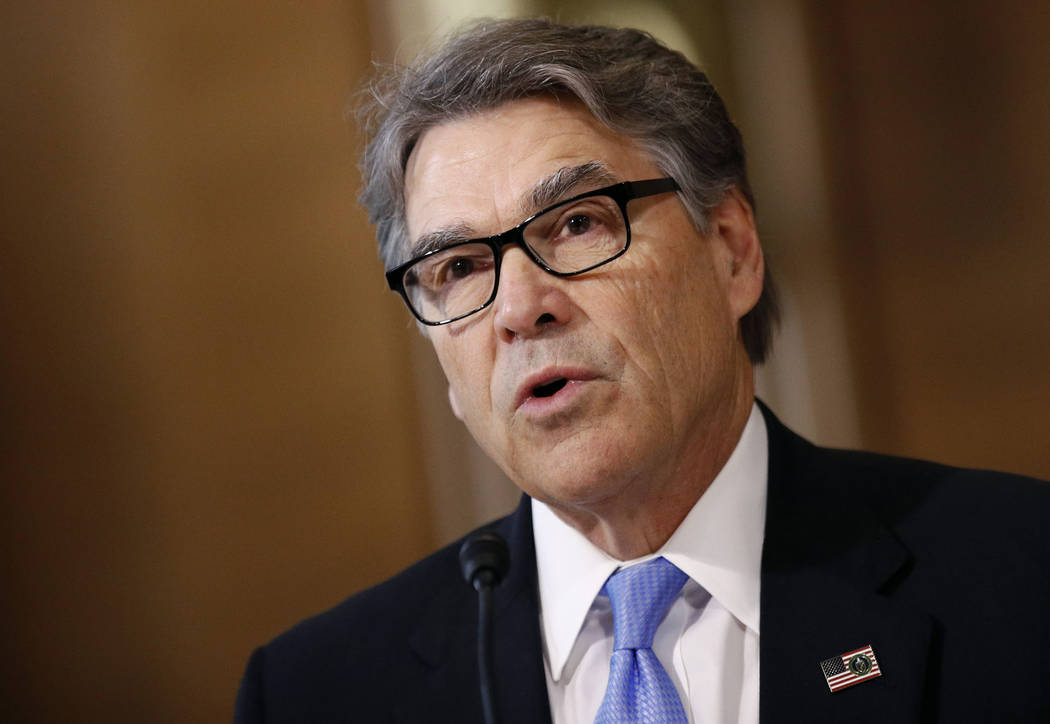 Energy Secretary Rick Perry testifies before the Senate Energy and Natural Resources Committee during a hearing on the President's budget request for Fiscal Year 2020, April 2, 2019, on Capitol Hill in Washington. (Patrick Semansky/AP)

The U.S. Department of Energy may have mistakenly shipped “reactive” nuclear material that was incorrectly labeled as low-level radioactive waste into Nevada in dozens of shipments over the past six years.

The shipments started in 2013 and stopped in December 2018. They were supposed to send only low-level radioactive waste from the department’s Y-12 facility in Oak Ridge, Tennessee, to the Nevada National Security Site, roughly 90 miles northwest of Las Vegas, for secure disposal.

But on July 3, the Energy Department informed Nevada officials, that reactive material — which might be unstable under normal conditions and may have violent reactions when combined with other substances — may have been included in those shipments.

Gov. Steve Sisolak, as well as Nevada Sens. Catherine Cortez Masto and Jacky Rosen, sent Energy Secretary Rick Perry a letter two days later spelling out their concerns. They also expressed frustration over the latest error, which comes on the heels of the department’s decision last year to ship a half-metric ton of weapons grade plutonium to the security site and not disclose it until months after the fact.

“These egregious acts — whether acts of negligence or indicative of something else — are unconscionable and have potentially put the health and safety of Nevadans and our environment at unacceptable risk,” the letter said.

A Department of Energy spokesperson said there were nine shipments during that time frame that included 32 total containers of waste. Earlier in the day state officials had said that they were originally told there were 32 total shipments, and that the revised numbers released by the Energy Department were “significantly different than the info provided during DOE’s briefing to Governor Sisolak.”

The Energy Department confirmed Wednesday that shipments sent to the security site were not in compliance with its waste acceptance criteria, but said they posed no safety or health risk.

“The components that were shipped pose no risk to the safety and health of the general public or workers at the facility at NNSS. The Department’s National Nuclear Security Administration has launched an internal investigation to determine how this went undetected for a six-year period,” the department said in a statement.

The DOE also said that planned future shipments from the Tennessee facility have been “temporarily suspended,” and that Perry has directed staff to initiate a department-wide assessment of all shipping policies and procedures.

Nevada’s congressional delegation condemned both the Energy Department and Perry Wednesday for the errors, with Rep. Dina Titus calling the shipments “a new low.”

“The level of incompetence at the Department of Energy is only matched by its dishonesty,” Titus said in a statement.

Rep. Steven Horsford went so far as to call for Perry to resign from his post.

“Secretary Perry has repeatedly disrespected the people of Nevada and eroded the public trust in his ability to abide by established rules for waste disposal. His failure to disclose these actions amount to their lying to a federal judge, our Nevada congressional delegation and our state’s governor repeatedly about his agency’s activities in our state. Secretary Perry must resign immediately,” Horsford said in a statement.

Cortez Masto and Rosen, in a joint statement, said they would work to hold the government accountable for the shipments.

“Yet again, the DOE has violated its mission, broken Nevadans’ trust and failed to follow its own compliance procedures,” the statement reads. “We intend to immediately determine whether the mixed waste shipped to Nevada poses a hazard to the health and safety of Nevadans and will take every action necessary to hold the DOE accountable.”

And Rep. Susie Lee weighed in as well. “The continued carelessness with our safety is exactly the concern of every Nevadan who is told that we should welcome the storage of nuclear waste in our own backyard,” she said. “It’s clear that the Department of Energy does not take Americans’ health, safety, or security into consideration before making decisions. On behalf of every Nevadan, I am demanding answers from the DOE about how this could possibly happen and demanding the swift removal of this material from our state.”

On Tuesday, the governor and members of his senior staff met with top federal officials, including National Nuclear Security Administration Administrator Lisa Gordon-Hagerty, for a pair of in-person briefings at the Energy Department’s North Las Vegas offices. One briefing was unclassified, while a subsequent classified meeting followed that only Sisolak and top Nevada Department of Environmental Protection officials were privy to.

Sisolak learned of the error in a phone call with Deputy Energy Secretary Dan Brouillette, who told the governor that the shipments had been incorrectly labeled and “may contain a reactive material,” according to the letter sent last week.

“Such waste has never been approved for disposal at the NNSS,” the letter said.

The security site has operated as a permanent disposal location for what the federal government classifies as low-level nuclear waste, which can include rags, clothing, construction debris, filters and other equipment contaminated through exposure to radioactive material.

The governor’s office said that the Energy Department has not yet confirmed that the shipments contained any reactive materials, which Sisolak’s office said “would trigger additional safety concerns and run afoul of existing state permits and federal statutes governing the waste disposal mission at NNSS.”

The site also takes in some “mixed low-level” waste, which contains both low-level waste and hazardous waste materials — things like garbage, sludge and other discarded solid waste materials — so long as the reactive material has been neutralized. The NNSS does not accept mixed waste with any sludge, liquids or pressurized vessels, according to the DOE spokesperson.

The spokesperson said that the canisters shipped from Tennessee contained what the department refers to as “squibs,” — small, pressurized devices designed to remotely cut wires — which violates the NNSS’ waste acceptance agreement.

But the shipments sent between 2013 and 2018 were not properly categorized, which means the the federal government does not know which were low-level waste and which possibly contained dangerous hazardous materials.

Beyond violating the site’s own waste acceptance criteria agreement, not knowing the type of waste that is being stored at the security site could be dangerous for the site’s estimated 3,000 employees as well as the surrounding ecosystem. Materials are classified as hazardous because they are “known to be harmful to human health and the environment when not managed properly, regardless of their concentrations,” according to the Environmental Protection Agency’s website.